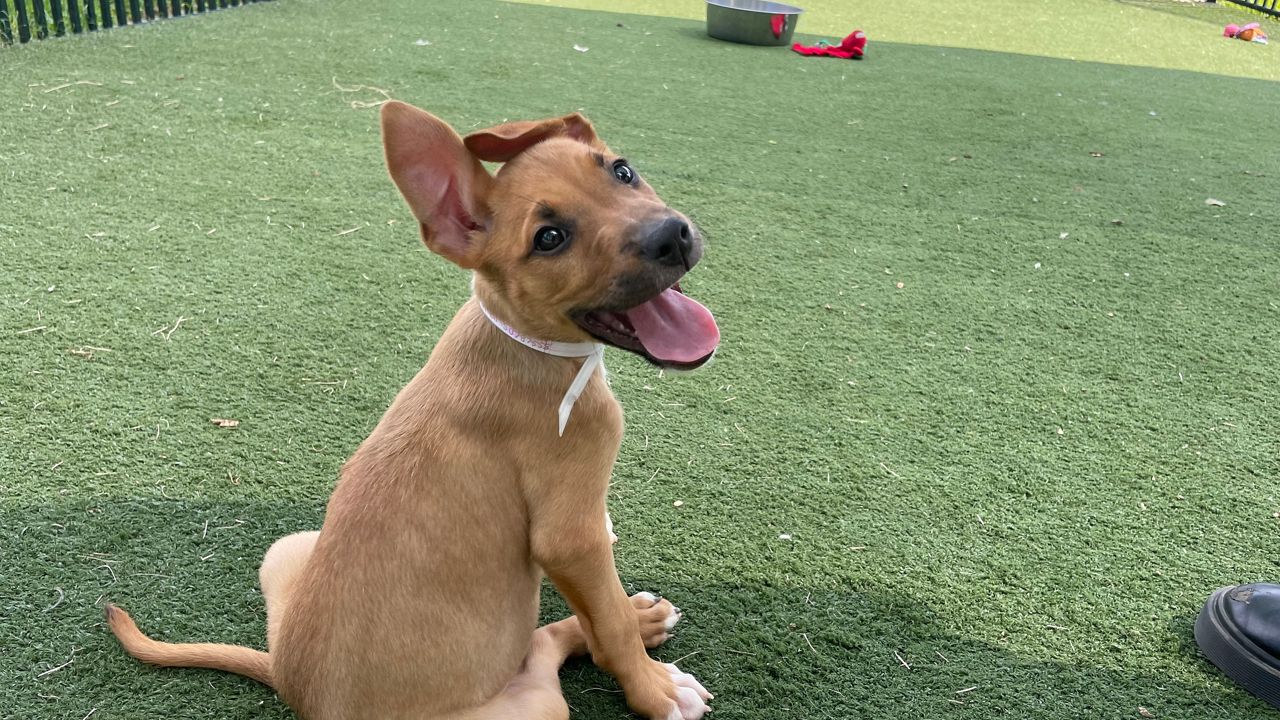 A puppy at the Kentucky Humane Society recently brought to the shelter from the Kentucky River Regional Animal Shelter after the floods in eastern Kentucky. (Spectrum News 1/Eileen Street)

LOUISVILLE, Ky. — When a natural disaster happens, it’s not just people who get displaced, pets do, too. So when the floods hit eastern Kentucky at the end of July, the Kentucky Humane Society (KHS) went down to help clear animal shelters.

However, they weren’t picking up animals who were displaced by the floods. KHS picked up animals already in shelters so room can be made for incoming displaced cats and dogs.


KHS Media Manager Megan Burgin said any animal not named that came from eastern Kentucky because of the floods to the Commonwealth’s largest pet adoption agency received a name related to the natural disaster.

“Kentucky Humane Society pulls from a lot of shelters around Kentucky, so this kind of helps us make sure that we know who is who,” she explained.

Tags on KHS kennels and cages identify which dog and cats at the Louisville-based humane society from eastern Kentucky after the floods.

“The animals that came to us were either up for adoption or already at the shelter prior to the flooding, and by taking them into the Kentucky Humane Society, we were able to help them clear out shelter space so they can actually take in those animals who are injured from the floods,” Burgin explained.

Clearing local shelters in a natural disaster area also gives space for animals who had a home prior, but have been separated from their families.

“We don’t want to go in and take any animals who are lost or displaced from the floods, more than likely their families are searching for them,” Burgin explained.

KHS said it has cleared two shelters in eastern Kentucky, so far: the Kentucky River Regional Animal Shelter and the Floyd County animal shelter. During that trip, KHS transferred 128 dogs and cats altogether, Public Relations and Marketing Director Sara Meehan said. Some of those dogs and cats came to KHS, while others went to partner humane societies in Kentucky and out-of-state, including Colorado and Connecticut.

Besides helping shelters in eastern Kentucky create more room for them to take in displaced dogs and cats, KHS is also providing food, kennels and other resources to help shelters and pet owners in the area. There is no date set yet, but KHS said they will make another trip soon to help take in more animals from the area’s shelters.

Meehan said KHS and other animal shelters had more capacity to help with last year’s tornadoes but it’s different right now because adoptions have slowed since last December. Animal shelters being near or over capacity right now are based on several factors, such as pets bought during the pandemic being surrendered and rising costs mean some people can’t afford their pets anymore.

“It’s just something we were struggling with already when the flooding happened, and that’s why we are calling on people that if you want to help these animals that have been affected by this natural disaster, then one of the best things you can do is adopt because that creates room in the shelters,” Meehan said.

More room in shelters means lost and displaced pets from the floods have a home, and it helps ensure animals that were in a shelter before the floods also have a home.