The hanger is paid for by Washington, D.C.-based Young Americans for Liberty Inc. (YAL), a nonprofit Libertarian youth organization focused on advancing its views on college campuses and in electoral politics funded through private donations. The group defines its four-step mission as identifying, educating, training and mobilizing youth activists.

“Our vision is to build a bench of 250 liberty legislators at the state level, who will advance a pro-liberty philosophy, ascend to higher office and reclaim the direction of our government,” according to its website.

The anti-vaccine mandate door hanger is part of the group’s “Win at the Door” campaign, which was launched in 2018 and deploys teams of youth activists to knock on doors and engage with voters directly.

The door hanger depicts President Joe Biden dressed as a doctor holding a syringe under the words “Stop Joe Biden’s vaccine mandate” in large, yellow letters. The website www.kymedicalfreedom.com is printed across the bottom front. The website contains a letter stating Biden is threatening millions of jobs because of vaccine mandates and has a form where citizens can provide information showing their support via a petition for Kentucky House Bill 28 and House Bill 54.

The back of the hanger states, “Medical decisions belong between you and your doctor” and “No forced vaccines.” 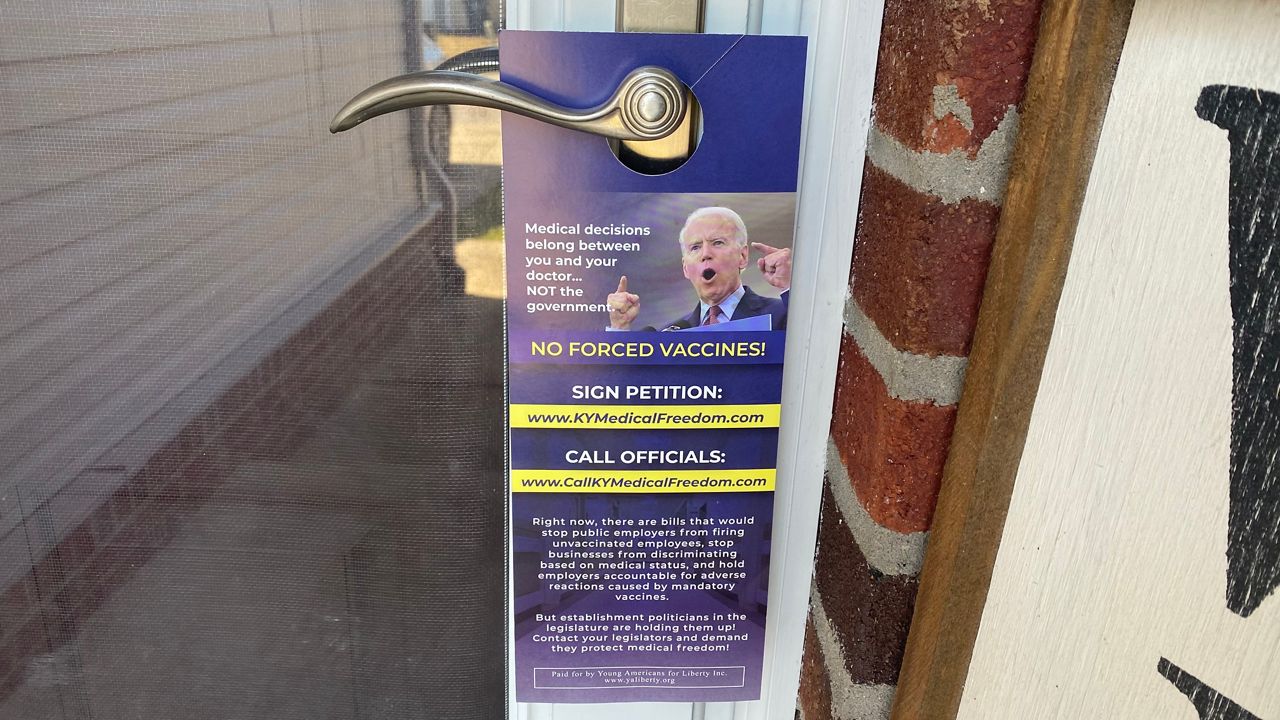 The back of a door hanger from Young American for Liberty Inc. opposing federal vaccine mandates. (Spectrum News 1/Brandon Roberts)

“Right now, there are bills that would stop public employers from firing unvaccinated employees, stop businesses from discriminating based on medical status and hold employers accountable for adverse reactions caused by mandatory vaccines,” according to the hanger. “But establishment politicians in the legislature are holding them up. Contact your legislators and demand they protect medical freedom.”

YAL is a libertarian, classical liberal and conservative student activism organization formed in 2008 in the aftermath of the Ron Paul 2008 presidential campaign. YAL establishes chapters on high school and college campuses across the United States and is active on nearly 400 college and university campuses, representing thousands of students. YAL’s “Hazlitt Coalition,” a network of libertarian state legislators around the country, oversees over 170 members in nearly 40 states and has filed 25 bills defending people’s rights against COVID-19 protocols.

“As Americans, we recognize the God-given natural rights of life, liberty and property set forth by our Founding Fathers,” a group representative said in an email. “Our country was created to protect the freedoms of the individual and directed by we the people. Consequently, YAL’s core beliefs revolve around limited government, the sovereignty of the individual, property rights and privatization.”

YAL chapters are active at several college campuses in Kentucky and the group has been publicly endorsed by Kentucky Republicans Sen. Rand Paul and Rep. Thomas Massie.

“Young Americans for Liberty is the most important youth organization in the country,” Paul said. “They are our best chance at winning the hearts and minds of the next generation.”

Massie agreed, calling YAL “the premiere youth organization in the “fight for our liberties.”

“With hundreds of chapters across the United States, they educate hundreds of thousands of students on the principles of freedom,” Massie said. “They are our best hope at creating a generation that respects the Constitution and Bill of Rights.”

After the U.S Supreme Court ruled this past January that health care facilities that receive Medicaid and Medicare can mandate their employees to be vaccinated against COVID-19, Kentucky Nurses Association CEO Delanor Manson said the organization was in favor of the decision.

Manson called it a “very positive step” in the fight against COVID-19.

“I am, and the Kentucky Nurses Association, is very supportive of keeping workers safe, as well as the patients and families that they interact with,” she told Spectrum News 1 reporter Sam Knef. “And so, I think, that it’s a very positive step. There are people who may not want to take the vaccine, but, I think, that when health care employers really consider the big picture of how to keep everyone safe, to have the authority and the commitment to make that happen, to stay focused on the importance of safety. I would say nurses are tired. They are physically, and emotionally, psychologically drained. So you get a choice. You do not have to take a vaccine, but you do not get the choice to put patients and families and other health care workers in harm’s way.”

Manson said nurses make up 53% of the health care workforce and acknowledged this ruling could lead to more people leaving a line of work that’s already facing a shortage in a time when health care workers are needed the most.

But, she also said this could lead to more people seeking more information, and perhaps reconsidering their stance.

The Supreme Court blocked the Biden administration from enforcing a similar vaccine mandate for large non-health care employers in the U.S.