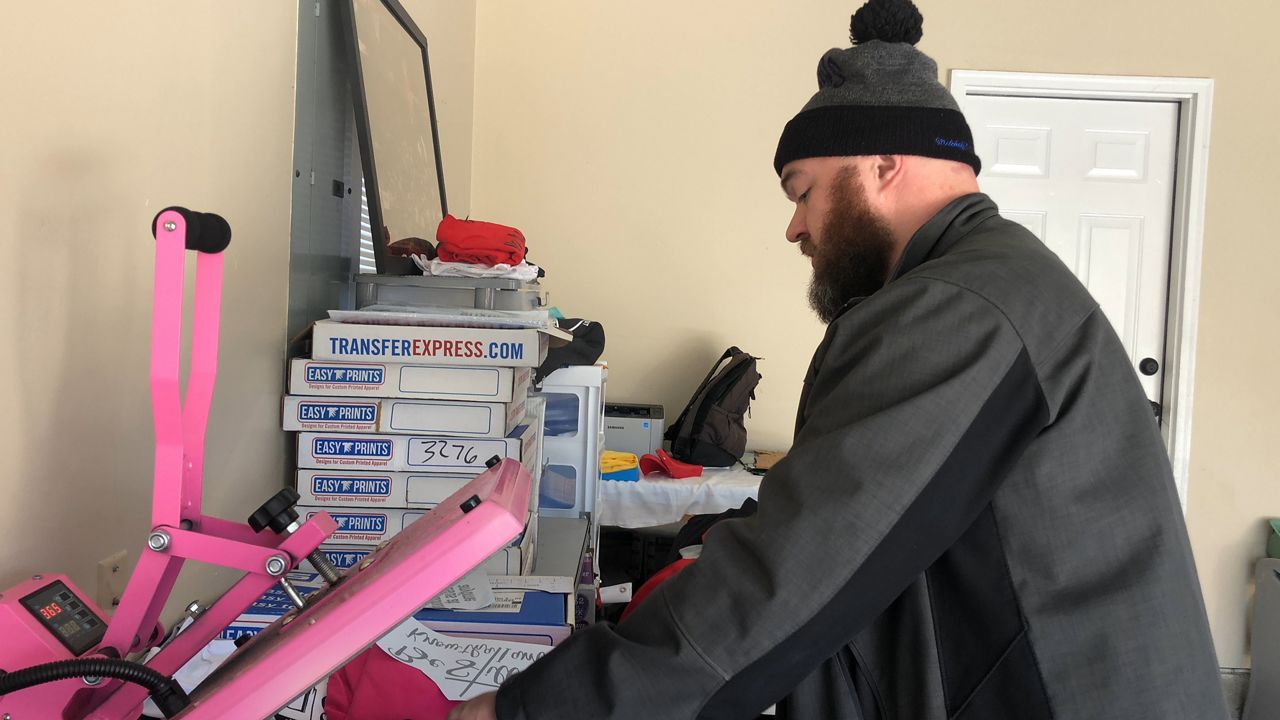 Asher Snedegar designs t-shirts and hoodies. It's a new calling to shift his life from an opioid addiction. (Spectrum News 1/Khyati Patel)

LEXINGTON, Ky. — A Kentucky man is restarting his life after battling an opioid addiction for more than a decade.

“I started out with five designs, and I look back on them and they’re absolutely terrible,” said Asher Snedegar, who started Salvation Swag.

“It was a dollar and a dream. I had five designs and some Gildan t-shirts and I pressed and sold it to my friends and invested that money in more,” Snedegar said.

Out of his garage, the 31-year-old presses his designs on hoodies and shirts.

“So I started using drugs in general when I was 10-years-old, a regular drug user by 15. I didn’t venture out into opioids until I was 20,” Snedegar said.

Through a work injury, opioids became a new addiction.

“By the time I was 26, I was in prison,” Snedegar said. “And after I got out of prison, I wanted nothing but to stay sober. But I couldn’t on my willpower alone.”

His destructive path continued for years, until September 2019, when he became sober.

His relapse caused an overdose.

“And a complete stranger, walking down a dead-end street in Nicholasville, Kentucky, revived me with Narcan and in that moment, I knew it was God. It wasn’t Narcan that saved me,” Snedegar said.

Since the early days of the pandemic, Snedegar has remained sober, becoming a better father and husband.

The Office of Drug Control Policy believes the fear of COVID-19, combined with the influx of illicit fentanyl in the drug supply, played a role in increased numbers.

“God is the center of my recovery. If it wasn’t for God for me, I’m fairly certain I’d be dead, my children would be fatherless and my wife would be a widow,” Snedegar said.

“So I speak to God on a daily basis. I read God’s word,” Snedegar said.

Because faith is integral for this Kentuckian, to leave behind opioids.

In a recent report from the Kentucky Injury Prevention and Research Center, opioid-related events such as possession and trafficking citations, deaths, emergency department visits, hospitalizations, or others increased by 3.7% from the beginning of 2017 through the spring of 2021 and by 13% increase from January 2021 through June 2021.