DJ KAOS: Louisville native is man behind the legend

LOUISVILLE, Ky. — While Kentucky may be better known as the birthplace of Bluegrass music and the home state of country music superstars such as Loretta Lynn, Dwight Yoakam, Chris Stapleton and others, it also has ties to other genres.


Long before Louisville native and rapper Jack Harlow burst onto the scene, a man shared the stage with and later became the backbone of the performances by members of hip-hop royalty.

Born and raised in Louisville, Dwight Chatman Jr., 49, professionally known as DJ KAOS, began his career unknowingly at age 10, handling the wheels of steel at parties and other functions for free to “spread his love of music to everyone he could,” he said.

Admiring and mimicking the revered sounds from the titans in the industry at the time, such as DJ Jazzy Jeff and DJ Kid Capri, KAOS said he knew being behind the Technics 1200 turntables was where he was destined to be. After opening for various national acts and playing the club scene, he said faith and opportunity placed him in the path of hip-hop icon Slick Rick The Ruler. For the past decade, he has served as Slick Rick’s music director and official touring DJ. 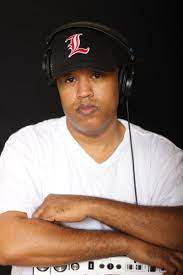 Louisville native and resident Dwight Chatman, known professionally as DJ KAOS, has been the touring DJ for hip-hop legend Slick Rick for the past 10 years. (Courtesy Dwight Chatman Jr.)

KAOS admitted he is humble and somewhat shy. He rarely grants interviews, but on this day, he sat in The Palm Room on West Jefferson Street in Louisville, the first place he performed as a DJ decades earlier, beneath a mural of the late Stephen Garrett, another Louisville native known professionally as Static Major, a singer, songwriter and producer who worked with artists such as Aaliyah, Ginuwine and Destiny’s Child.

“Louisville has deep roots in hip-hop,” he said. “Kentucky is kind of new to the game overall, but there is some hip-hop history in all parts of this state. I think it’s time people know about it. That’s the main reason I feel the need to talk about it. I’m a strong believer in faith, and the way my life has been set up, I find the more I humble myself, the higher He lifts me up.”

He spoke about Nappy Roots, the alternative Southern rap quartet from Bowling Green that formed in 1995. The group’s hit singles “Po’ Folks,” “Awnaw,” and “Good Day” made Nappy Roots the bestselling hip-hop group of 2002.

It was his faith that ultimately led to his connection with Slick Rick, as well as other iconic rappers such as Chubb Rock, Rakim and Dana Dane. KAOS spent years DJing locally in Louisville, usually for free, just about anywhere he could. While working for a company that installs electronics, he received a call from an employee at a Louisville radio station who asked for a favor.

“The radio station was sponsoring a concert and needed to borrow my turntables,” he said. “I told them that was not a problem and they asked how much I would charge. I told them I wouldn’t charge them anything. I went down there, set them up, and went back to work.”

Later that day, he received another call from the radio station. Although he did not know it at the time, it was the phone call that changed the trajectory of his life.

KAOS recalled the show was on the waterfront, and it started raining.

“I was new, so I was one of the guys that if I felt it in my spirit to say a prayer, I just did,” he said. “Before the show, everybody was worried because it was raining. I got everybody in a circle. I can't tell you what I said, but I prayed. The night was miraculous. Out of 12 cities, the artists said Louisville was the best show, even with the rain coming down. A man asked me for my card, so I gave it to him."

About a week later, he got another phone call, this time from a woman named Mandy Aragones. She asked him if he was the DJ that said the prayer before the show in Louisville she keeps hearing about, and he said he was. She told him she was also told he was a great DJ and inquired if he would be interested in coming to New York City to DJ a party.

“I was going through one of the most difficult times in my personal life emotionally, so the call could not have come at a better time,” he said. “She asked me what I would charge, and I told her I would do it if she would just pay to get my equipment there because, to me, I saw the opportunity to DJ in front of a crowd in New York as enough of a reason to do it.”

Aragones picked up KAOS at the airport and told him he needed to DJ for about one hour.

“One hour turns into two hours. Two hours turns into three hours. People are going crazy in this little club,” he said. “But in this club, it seemed was a bunch of actors and other VIPs. I had no idea.”

After the show, Aragones is taking KAOS to the airport when she reveals to him her true motive — she is Slick Rick’s wife and manager and she wants him to be his DJ.

“She told me she was looking for a team of positive people to put around him because he needs that,” KAOS said. “She told me my job would be to be exactly who I was the day I said that prayer on the waterfront in Louisville. Not only saying a prayer but also a dope DJ.”

KAOS said the New York City DJing gig was a test, and by all accounts, one he passed with flying colors. He later received a letter from Slick Rick wherein he complimented his skills as a DJ and told him he looked forward to meeting him.

“Some time goes by, and they fly me to New York and we do a couple of shows together,” he said. “It was beautiful and amazing. I’ve always been a Slick Rick fan, even before all this. He is one of my favorite artists, and I’m right there hanging out with him on a daily basis. It’s kind of prophetic in a way.”

It has been 17 years since KAOS and Slick Rick teamed up, and he has taken on many roles aside from being his DJ, such as road manager, music director and producer.

Life as a hip-hop DJ

KAOS said he thinks he hears music differently than most people and his love of all types — blues, jazz, rock, hip-hop — is what inspired him to become a DJ.

“I like seeing people happy. I like changing the atmosphere and taking people out of that funk,” he said. “Anytime you watch those old clips of hip-hop in New York or any big city, there's dancing in the streets and the sidewalks, and there's a guy set up with speakers and his DJ equipment, and people are just having a blast.” 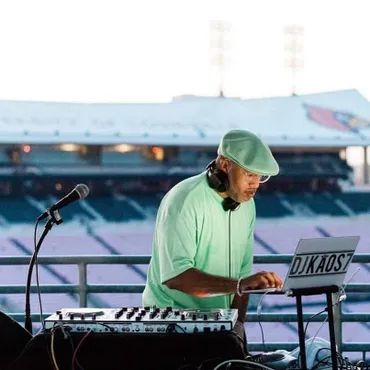 A graduate of Pleasure Ridge Park High School, he has spent most of his life in Louisville but lived for several years in Detroit and New York City. He travels a lot, with his schedule often having him spend a day in Miami, a day in Los Angeles, and a day in New York doing shows before heading home to Louisville for more shows.

“It's been good,” KAOS said. “I can't stress enough how I'm doing what I love, and I get to see people have a good time, and I don’t make a ton of money, but I can take care of my family and get to do what I love for a living.”

Not focusing on fame and fortune is what he credits for his path in life.

“I always thought if I put a black sheet up, and nobody can see the DJ, I would be fine with that,” he said. “I never wanted attention. I just wanted to play music. Fame and fortune are the focus in some people’s lives, but they end up never doing anything. People focus too much on that.”

Slick Rick praised KAOS not only as a person but also as his DJ, saying he is “an excellent mix master” and a “qualified studio engineer.”

“He is a gentleman and a scholar,” Slick Rick said in a prepared statement. “He is fun, loyal, honest, and down-to-earth. A good brother, decent soul, and a good friend that I know is my guardian angel. DJ-wise, no other cats can mess with DJ KAOS. Hands down, he has got it on lock from the Bronx to Kentucky.”