President Joe Biden and Vice President Kamala Harris stand together at the Martin Luther King, Jr. Memorial as they arrive to attend an event marking the 10th anniversary of the dedication of memorial in Washington, Thursday, Oct. 21, 2021. (AP Photo/Susan Walsh)

At MLK memorial, Biden, Harris mark modern relevance of Dr. King's legacy: 'We never give up. We keep the faith.'

Ten years after the Martin Luther King, Jr. memorial was first recognized as a new landmark on Washington, D.C.’s National Mall, the president and vice president marked the anniversary of its dedication on Thursday, evoking the civil rights activist's legacy for its relevance today, as the Biden administration fights for voting rights legislation, police reform and a massive social spending plan.

The memorial, which sits on D.C.’s water-filled Tidal Basin and directly across from the Jefferson Memorial, recognizes Dr. King with a 30-foot sculpture of his likeness, the first African American figure to be recognized in that way.

President Joe Biden on Thursday pointed to King's legacy as evidence of the need to keep pushing ahead, including with his administration's priorities.

"We all deserve to be treated equally," he said. "We've never lived up to that idea, but we've never walked away from it fully."

"From here, you see the ongoing push and pull between progress and struggle, over the self-evident truths of our democracy," he added. "We now face an inflection point and the battle, literally, for the soul of America. If we keep the pressure up. If we never give up. If we keep the faith."

Vice President Kamala Harris pointed to Republicans' decision to block debate on a voting rights bill this week "as though it's not a debatable point."

"Freedom is never really won," she said, paraphrasing Corretta Scott King. "You earn it, and you win it with every generation. With their sweat, with their tears and with their blood."

“For this day, we celebrate Dr. Martin Luther King, Jr.’s return to the National Mall,” President Obama said, referring to the 1963 March on Washington, when Dr. King gave his defining “I Have a Dream” speech.

“In this place, he will stand for all time, among monuments to those who fathered this nation and those who defended it; a black preacher with no official rank or title who somehow gave voice to our deepest dreams and our most lasting ideals, a man who stirred our conscience and thereby helped make our union more perfect,” Obama said. 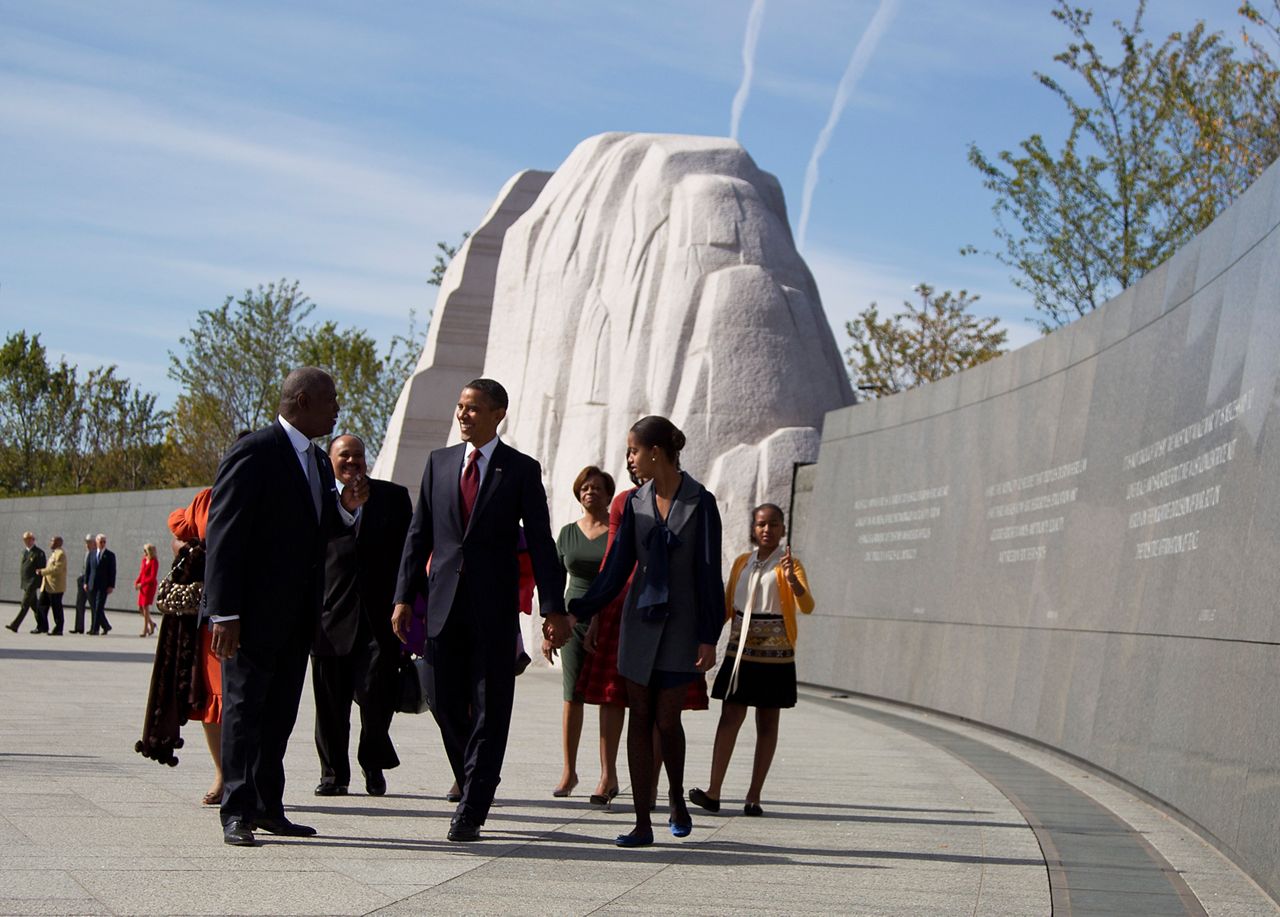 The stone statue of Dr. King is meant to symbolize him emerging from a “mountain of despair” with two large, jagged rocks on either side set back behind the sculpture itself. This refers to a line in his famous speech: “With this faith, we will be able to hew out of the mountain of despair a stone of hope.”

Other Dr. King quotes are engraved around the rest of the memorial. 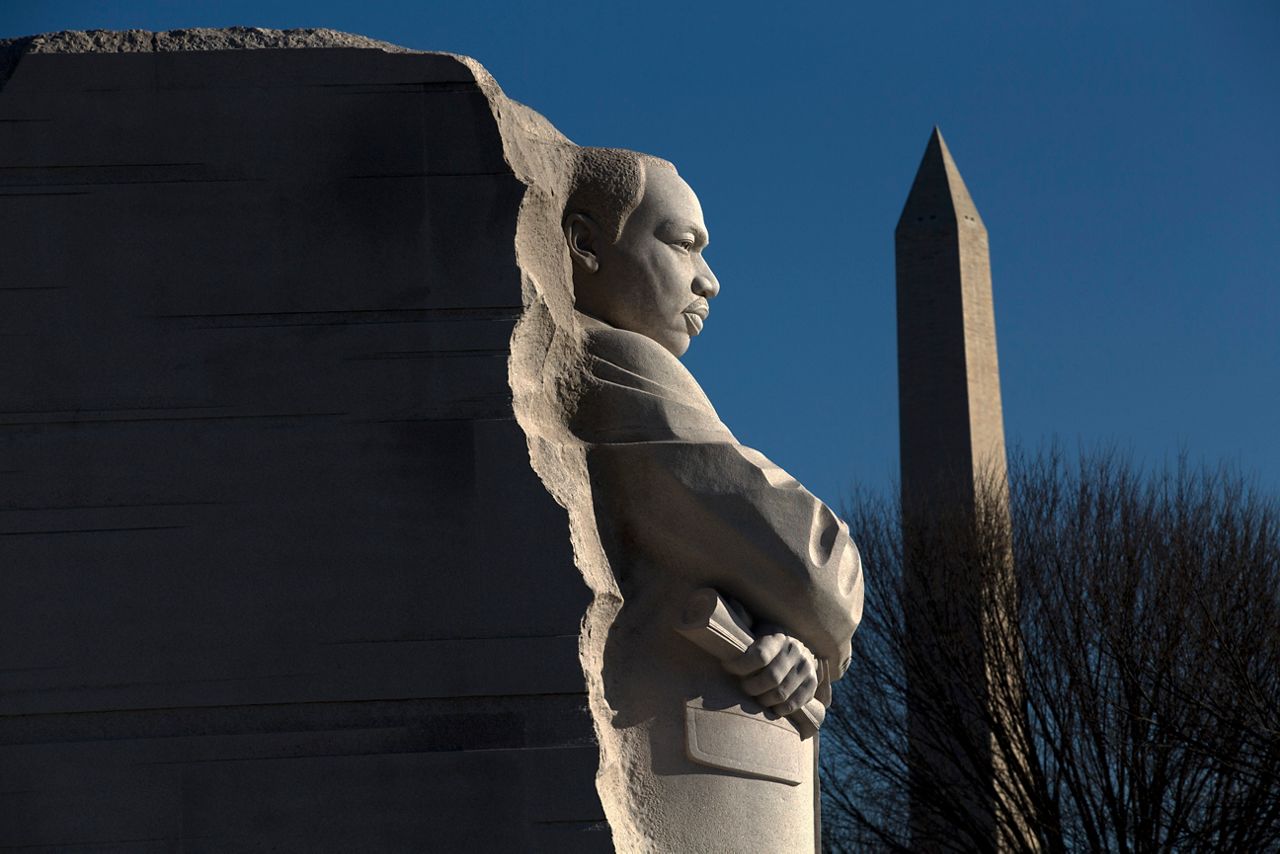 The Martin Luther King, Jr. Memorial is seen with the Washington Monument, during the 9th Annual Wreath Laying and Day of Reflection and Reconciliation, in Washington, Monday, Jan.20, 2020. (AP Photo/Jose Luis Magana)

"Think about it: For a decade, visitors from all over the world have come to this very place. The words that are etched in these walls now etched in their hearts, and on their smartphones," Vice President Harris said Thursday. "I know that when they leave here, they do so determined to do their part to build a better future."

President Biden called on Americans to be brave, as Martin Luther King, Jr. was, to move forward with change.

"Here we stand with Dr. King to show [that] out of struggle, there's progress. Out of despair, there's hope," President Biden said. "From the promise of equality and opportunity and jobs justice and freedom, we see Black excellence. American excellence. Black history as American history, and the defining source of the might of this nation."

"I know that progress does not come fast enough," Biden said. "It never has. The process of governing is frustrating and sometimes dispiriting. But I also know what's possible. We never give up. We keep the faith."

In 2011, Obama similarly recognized King’s speech and his march on Washington as the root of the United States’ “courage” to progress.

“Because of that hopeful vision, because of Dr. King’s moral imagination, barricades began to fall and bigotry began to fade,” he said. “New doors of opportunity swung open for an entire generation. Yes, laws changed, but hearts and minds changed, as well.”