OHIO — Well-renowned animal expert and advocate Jack Hanna, 74, has been diagnosed with dementia, his family revealed in a letter Wednesday, and will be stepping back from public life.

Hanna has worked at the Columbus Zoo and Aquarium for more than 40 years, serving as its executive director between 1978 to 1992. Since he left the role, he took on a spokesperson role up until he retired at the end of last year.

"Doctors have diagnosed our dad. Jack Hanna, with dementia, now believed to be Alzheimer’s disease,” the letter read, written by his three daughters, Kathaleen, Suzanne and Julie. “His condition has progressed much faster in the last few months than any of us could have anticipated. Sadly. Dad is no longer able to participate in public life as he used to.”

A letter from the Hanna Family pic.twitter.com/ewuNYa0ReG

More commonly known as "Jungle Jack," decked out in khaki on a regular basis, he's credited with putting the Columbus Zoo on the map with weekly television appearances, advocating for improving wildlife habitats and encouraging the community to learn more about animal conservation.

His love for animals started at his home in Knoxville, Tennessee, dubbed "Hanna's Ark" where his family raised and cared for animals.

"He has spent his life connecting people and wildlife because he has always believed that having people see and experience animals is key to engaging them in more impactful conservation efforts. He’s always said, ‘You have to touch the heart to teach the mind," the family wrote in the statement.

After being executive director, he hosted a slew of his own shows: “Jack Hanna’s Animal Adventures” from 1993 to 2008, “Jack Hanna’s Into the Wild” since 2007 and “Jack Hanna’s Wild Countdown” from 2011 to 2020. In between the shows, he still made multiple public appearances. 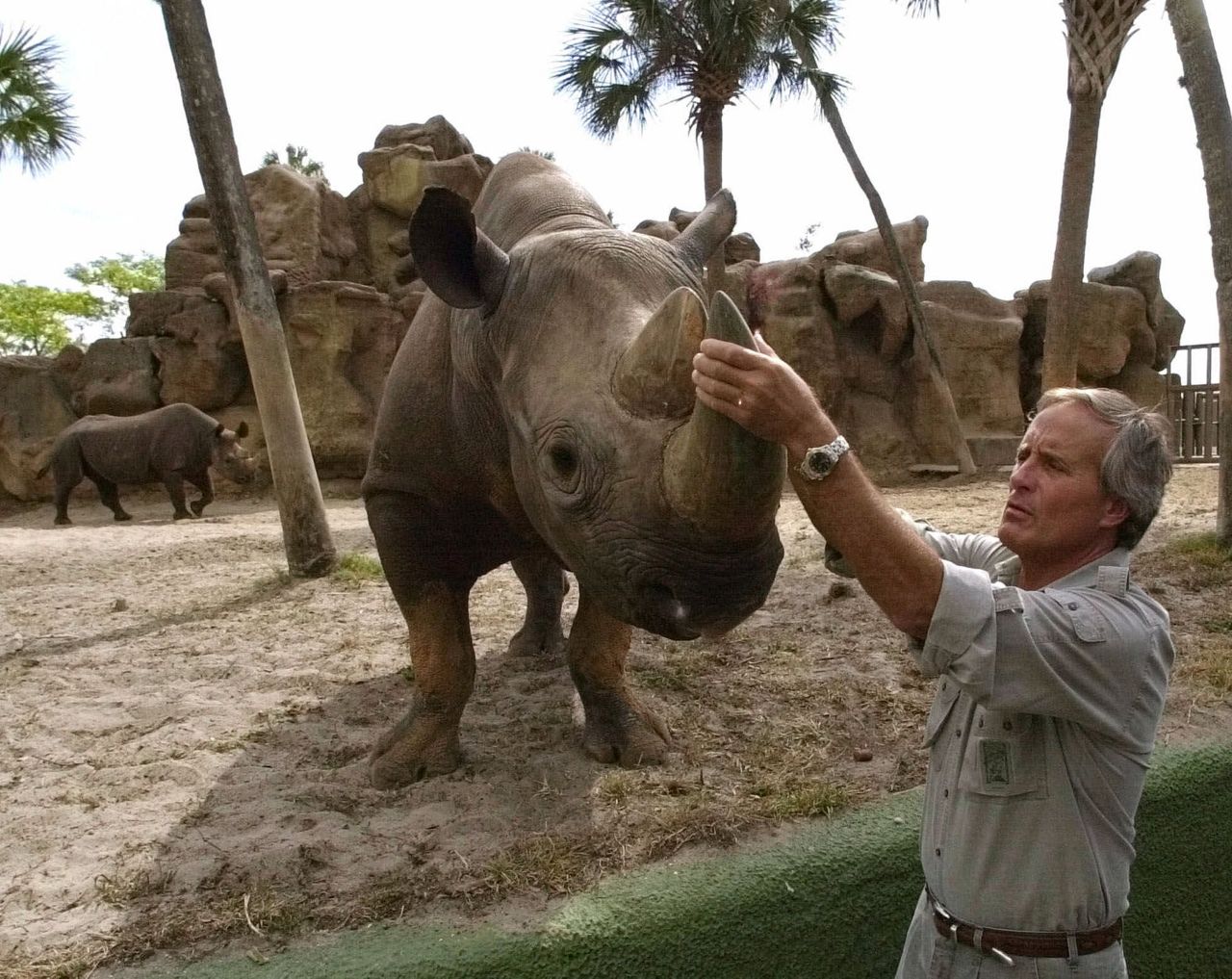 Nationally recognized animal expert Jack Hanna grabs the tusk of a black rhino after helping Busch Gardens Tampa Bay unveil plans for their newest attraction "Rhino Rally" Wednesday, May 10, 2000 in Tampa, Fla. The ride, which is scheduled to open in the spring of 2001, will blend up-close animal encounters with an off-road safari river adventure. (AP Photo/Chris O'Meara)

“While Dad’s health has deteriorated quickly, we can assure you that his great sense of humor continues to shine through. And yes – he still wears his khakis at home," the letter read.

His daughters also revealed Hanna's wife, Suzi, is recovering from surgery as a result of “life-long challenges from her childhood leukemia.”

"We're saddened by the latest news of Jungle Jack's dementia diagnosis, now believed to be Alzheimer's disease, and Julie's health complications that were shared today in a heartfelt letter written by Jack's daughters. Please join us in sending messages of support for the Hannas," the Columbus Zoo and Aquarium wrote in a statement.

"Our hearts go out to Jack's family. He has been such an important person to this community. It's devastating for a family to receive this type of diagnosis. We work to promote awareness of this disease so that people can have a better understanding of it. Early diagnosis is so important so that individuals can participate in their care planning in the early stages of the disease," said Vince McGrail, executive director and CEO of the Alzheimer's Association Central Ohio Chapter. "If anyone has concerns about memory issues, we encourage you to go to the doctor. If you have questions, our 24/7 Helpline is available at 800-272-3900."

“Fran and I were very sad to learn of Jack Hanna’s diagnosis of Alzheimer’s that his family so bravely shared with Ohio and the world today," DeWine said. "Over the years, Fran and I have had the opportunity to take our kids and grandkids to the Columbus Zoo and Aquarium and The Wilds.  When we were there with Jack, we were so fortunate to experience his passion for animals and the natural world.

“Along with our fellow Ohioans, we wish Jack, Suzi, and their daughters our best as they navigate the challenges of this disease and will be keeping them in our prayers.”

"The Busch Gardens family is saddened by Jack Hanna's diagnosis," the statement said. "Our hearts go out to Jack and the entire Hanna family as they navigate this difficult time. Jack touched the lives of those who had the pleasure of working with him throughout his career and he has inspired millions of people to protect our planet and the animals who call it home. "