WILMINGTON, Del. — President-elect Joe Biden formally introduced a number of appointments and nominees to key health positions in his incoming administration Tuesday, saying the assembled team is “defined by a deep sense of honor, duty and patriotism.”

Should they be confirmed by the Senate, Biden’s health team would include: Xavier Becerra as Secretary of Health and Human Services; Dr. Vivek Murthy as Surgeon General; Dr. Rochelle Walensky as Director of the Centers for Disease Control and Prevention; and Dr. Marcella Nunez-Smith as Chair of the COVID-19 Equity Task Force.

Biden still has not announced his picks to head up the Food and Drug Administration or the Centers for Medicare & Medicaid Services.

Biden also announced his top priorities for tackling COVID-19 during the administration’s first 100 days. The plan was created in coordination with Dr. Anthony Fauci, the nation’s top infectious disease expert, who agreed to join Biden’s administration.

Biden’s three main focuses will be: to encourage all Americans to wear masks for 100 days, to distribute 100 million vaccine doses to those most in need, and to see as many schools open in-person as possible.

“My first 100 days won’t end COVID-19. I cannot promise that. We did not get into this mess quickly, and it’s going to take time to fix,” Biden said during a press conference from the Queen Theater in Delaware. “But I am convinced that in 100 days we can change the course of the disease and change life in America for the better.”

For his first point, Biden said he will issue a mandate on day one of his presidency mandating mask-wearing “where I can under the law,” including public transport and government buildings. Biden will also work with mayors and governors across the country to implement similar rules in their jurisdictions, but said the plan would not work unless Americans make the choice to comply.

“We need your help,” Biden said in a plea to the American people. “Wear a mask for just 100 says. It's the easiest thing you can do to reduce COVID cases, hospitalizations, and deaths.”

With multiple promising vaccine candidates on the horizon, Biden made the ambitious pledge to distribute 100 million doses within his first 100 days in office. Calling it the “most efficient vaccination plan in U.S. history,” the president-elect said those most at risk would receive the first doses, with educators next in line for the vaccine.

The president-elect will need Congress to pass sufficient funding for most of his plans to be successful. On Tuesday, Biden reiterated he is “encouraged” by a $900 billion aid package introduced by lawmakers last week.

All of the incoming health appointees and nominees will work alongside the already-announced members of his economic and national security teams to eradicate COVID-19 not only in the United States, but around the world, Biden said Tuesday.

“We will still have much to do in the year ahead,” he said. “And, sadly, much difficulty, too. We will be far, far from done,” Biden said. “Yet, it is possible that after 100 days, we will be much further along in the fight against the pandemic.”

Here is some of what Biden and his appointees and nominees had to say:

Nominee for Secretary of Health and Human Services: Xavier Becerra 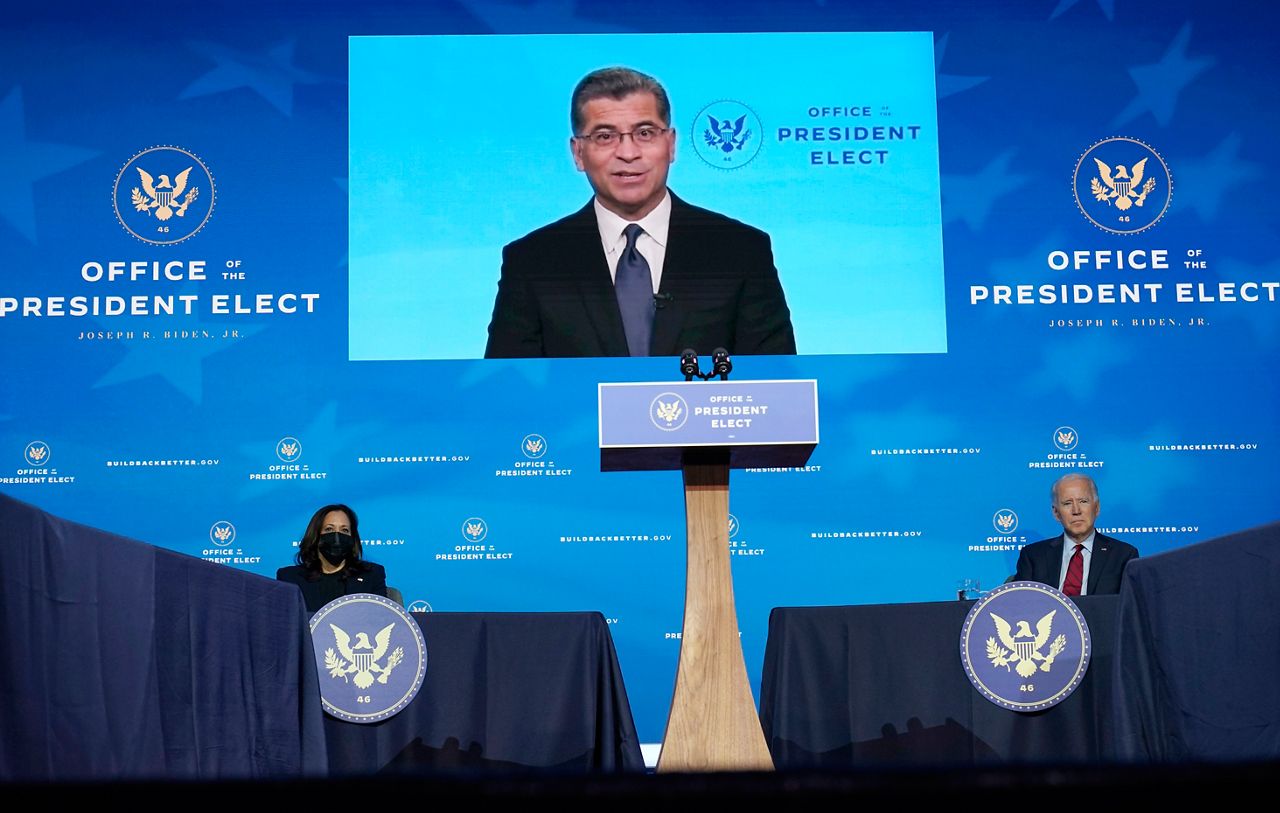 It came as no surprise to many when Biden announced California Attorney General Xavier Becerra, a frequent and ardent defender of the Affordable Care Act, as his pick for HHS Secretary.

If confirmed by the Senate, Becerra will be “the first Latino leading HHS, a son from a working-class immigrant family that came from Mexico,” Biden affirmed. HHS is a $1 trillion-plus agency with 80,000 employees and a portfolio that includes drugs and vaccines, leading-edge medical research and health insurance programs covering more than 130 million Americans.

Becerra, who delivered his own remarks via video chat from California, echoed Biden’s support of expanded medical coverage options, saying “health care is a right — not a privilege.”

“I share the president-elect and vice-president-elect’s determination to rebuild unity and civility in America,” Becerra added. “We know it takes hard work. We know we must do it together. We know it will be key to building critical momentum and support for the prevention and treatment of the coronavirus.”

Appointment for Coordinator of the COVID-19 Response Team: Jeff Zients Another proponent of the Affordable Care Act — and the man who made a name for himself restoring the HealthCare.gov website when it went off course — is Jeff Zients, Biden’s pick for Coordinator of the COVID-19 Response Team.

“That was a monumental feat that required vision, patience, and fortitude and expertise,” Biden said of Zients’ work on the ACA Tuesday. “Well-respected across the aisle, and around the country from business and labor leaders to entrepreneurs and educators.”

Possibly indicating a more assertive federal coronavirus role with his selection of Zients, Biden pledged his appointee knows how to “fully mobilize the federal government on behalf of the health, safety, and prosperity of the American people.”

Zients delivered a nearly identical message during his own address, saying: “We will utilize the full capacity of the federal government to get this pandemic under control.”

“To harness and examine the data to expand testing. To deliver equipment and PPE to those on the frontlines. To provide resources for schools and businesses to operate safely. To address the racial disparities and inequities of this pandemic. To rejoin the global fight against COVID-19 — because no one is safe until everyone is safe,” Zients continued.

Zients also harkened back to his days working on the Affordable Care Act alongside Biden, recalling words the then-vice president told him at the time.

“I know you and the team can do this, but I need you to promise me one thing: That you will always, always, give it to us straight because we have to understand the challenge we’re facing. Because most of all, we are in this together. And together we can do this,” Zients quoted Biden as saying.

It is a promise, Zients said, he is more than happy to keep in the years ahead. Should Vivek Murthy’s nomination for Surgeon General be approved by the Senate, it would be, as Biden said, his “second time serving as America’s Doctor.”

Murthy served as Surgeon General under President Barack Obama for several years beginning in 2014, becoming the first person of Indian descent to hold the position.

Biden said he asked Murthy to return as Surgeon General “with expanded responsibilities,” acting in part as a “key public voice on our COVID response, to restore public trust and faith in science and medicine.”

“But he will also be a key advisor to me and help lead an all-government approach to broader public health issues — mental health, addiction and substance use disorders, social and environmental determinants of health, and so much more,” Biden added.

In turn, Murthy said he is “grateful to be able to do everything I can to end this pandemic,” adding: “When I left my role as Surgeon General, I never dreamed I would have an opportunity to serve again.”

Acknowledging the potentially expanded role as Surgeon General under Biden, Murthy said in part: “...COVID 19 is not the only health crisis we face — if anything, it has underscored a host of other epidemics that are devastating families and shortening lifespans: addiction, the opioid crisis, and spiraling mental health concerns; glaring racial disparities and high rates of diabetes and heart disease.”

Appointment for Director of the Centers for Disease Control and Prevention: Dr. Rochelle Walensky

A lifelong physician, Walensky’s work “was instrumental in helping the world mitigate one public health crisis — HIV/AIDS,” Biden said Tuesday. She will bring her expertise on “the testing, treatment, and eradication of viruses” to the ongoing coronavirus pandemic, he added.

“[Walensky] is uniquely qualified to restore morale and public trust,” Biden continued. “She will marshal our finest scientists and public health experts at the CDC to turn the tide on the urgent crisis facing us today.”

Walensky drew comparisons between the coronavirus pandemic and her experience dealing with the HIV/AIDS crisis in her own address; in both cases, she said, the most vulnerable communities bear the highest risk of catching the disease.

“A new virus is ravaging us,” Walensky said of COVID-19. “It is striking hardest, once again, at the most vulnerable — the marginalized; the under-served.”

Walensky likened leading the CDC to responding to patients in need, saying in part: “... Every doctor knows that when a patient is coding, your plans don’t matter. You run to the code. And when a nation is coding, if you are called to serve, you serve.” 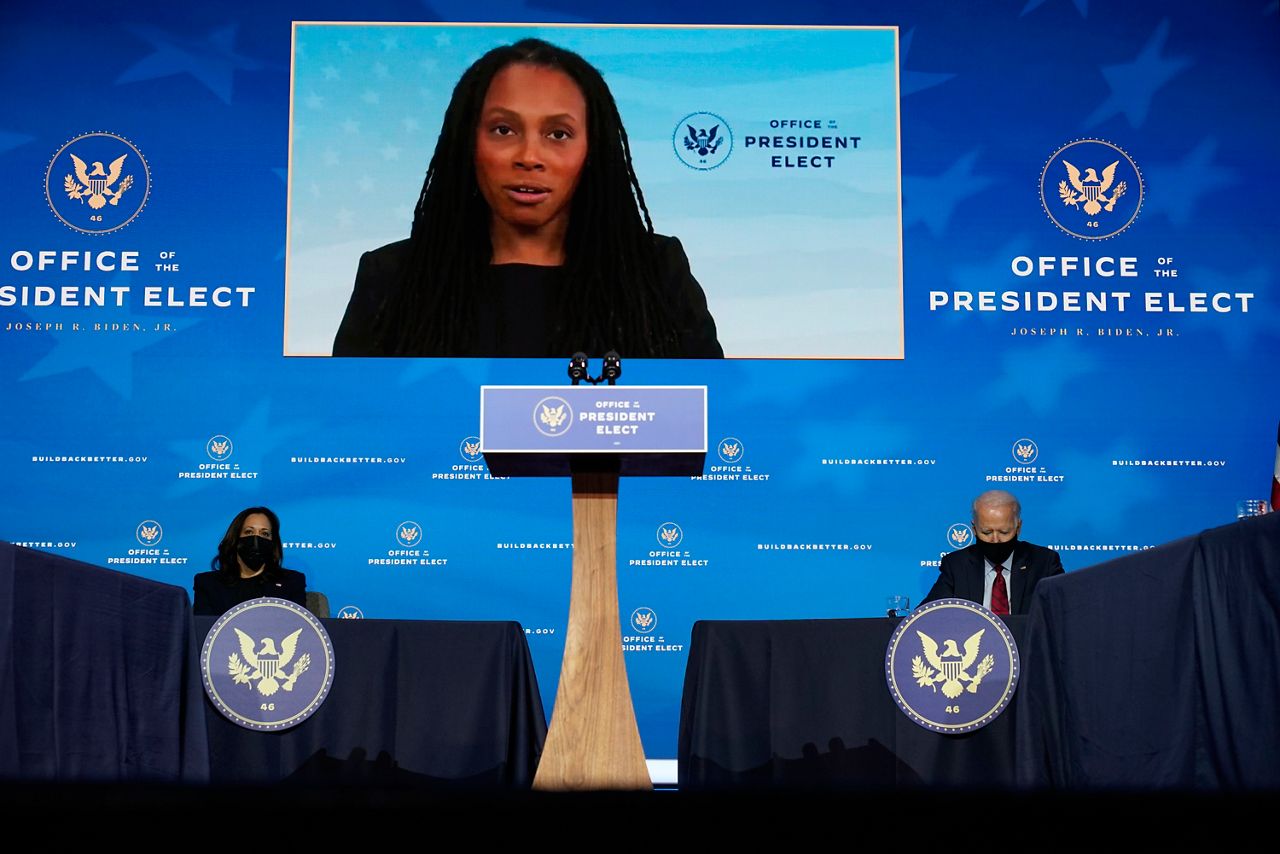 Biden’s selection of Yale University’s Dr. Marcella Nunez-Smith was read as a sign that his administration will work for equitable distribution of vaccines and treatments among racial and ethnic minorities, a message the president-elect stressed on Tuesday.

The coronavirus outbreak has hit Black, Hispanic and Native Americans disproportionately in hospitalizations and deaths. Reasons are complex, but the disparities are thought to stem from minorities working in jobs on the front lines, having medical conditions associated with severe disease, higher rates of poverty and poor access to health care.

Biden acknowledged “the pandemic’s disproportionate impact on communities of color” during Tuesday’s address, saying he created a COVID-19 Equity Task Force to address the issue.

“Dr. Nunez-Smith will lead our efforts to provide care to the communities most in need and most affected by the pandemic and most often overlooked,” Biden said. “She will ensure that fairness and equity are at the center of every part of our response.”

In response, Nunez-Smith said she would be “proud to go to work with leaders who are deeply committed to science and to centering equity in our response to the pandemic.”

“It is our societal obligation to ensure equitable access to testing, treatments, and vaccines,” she continued. “Equitable support for those who are hurting. And equitable pathways to opportunity as we emerge from this crisis and rebuild — including for the most marginalized communities: the undocumented, the incarcerated, and the homeless.”