In Wisconsin, Christian Protesters Show Up On Both Sides Of The Trump Divide

OSHKOSH, Wis. (SPECTRUM NEWS) — This week in Wisconsin is shaping up to be a lesson in political divides, as the Democratic National Convention rolls on in its scaled-back form in Milwaukee and President Trump’s campaign hosts its own events throughout the state.

Those splits are also showing up in religion as well, as Wisconsinites say their Christian faith informs their politics on both sides of the aisle.

According to a Pew Research Center study, 71% of Wisconsinites identify as Christians, with most of them describing themselves as either Catholic (25%) or evangelical Protestant (22%). Those numbers are pretty much in line with the overall U.S. breakdown, which show the country remains mostly Christian even as Americans have become less religious overall in recent years.

The study also found that more than twice as many Christians described their political ideology as conservative (44% of the overall group) compared to those who identified as liberal (18%).

On Monday, as Trump touched down in the city of Oshkosh for a speaking event, Tobianski joined about 100 people who marched in protest of the president’s visit. The marchers — led by the Coalition to March on the Democratic National Convention, a progressive group organizing actions throughout the week — were met with intense counter-protests, many of whom carried signs with Bible verses in addition to pro-Trump gear.

Counter-protesters at the event highlighted their opposition to abortion and, in some cases, homosexuality, issues that make up an important part of the conservative platform. Banners showed graphic images of unborn fetuses and slogans like “Thou Shalt Not Kill.”

A few clashes and very harsh words being said between a man with a bull horn and protestors. pic.twitter.com/NKcx0aYqt7

And Trump himself alluded to his supporters’ religious beliefs in his speech happening just down the street from the protests, asking attendees: “Do you want to defend our history, our heroes, our faith, our values, and our treasured American way of life?”

For Tobianski, though, her interpretation of Christianity doesn’t match up with conservative politics. She says her religion is all about love, and she doesn’t see “forcing women to not be able to choose what to do with their bodies” or “keeping kids in cages” as in line with her beliefs.

“It's hard because as a Christian, and an activist, you want to support human rights and social justice, because that's what's right,” Tobianski says. “But you don't really fit in with the Christians, because they tend to lean towards conservative views.” 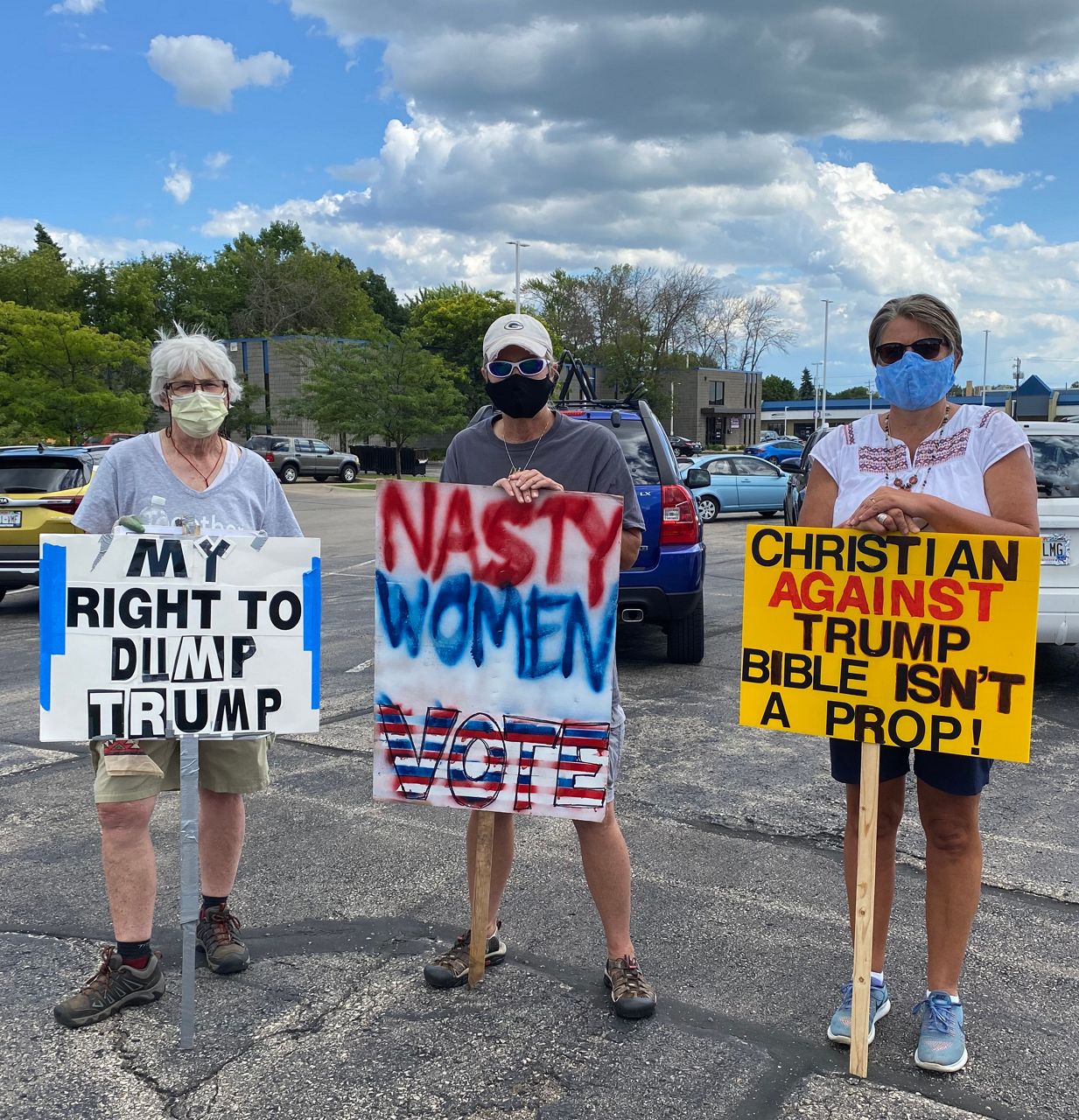 Another anti-Trump protester, who identified herself as Laurie, carried a sign with the phrase: “Christian Against Trump, Bible Isn’t A Prop” — apparently a reference to the president’s photo op in front of a D.C. church.

She says she wasn’t sure at first whether to use her sign to focus on her faith, but wanted to oppose the stereotype that all Christians are, by default, Trump supporters.

“I usually don’t wear my Christianity on my sleeve,” Laurie says. “But I am tired of the evangelicals and the Christians supporting Trump. In my opinion, he is the exact opposite of Christianity.”

The protests in Oshkosh were overall peaceful, but tensions grew high when a few counter-protesters faced off with the anti-Trump group after they stopped marching.

Tobianski, who had volunteered as a marshal for the event, was in the midst of the confrontation, physically stepping between the two groups to break them up. Though she says the experience was “terrifying,” she plans to continue to attend protests and share her beliefs whenever she has the chance.

“I just hope that the people around me saw that Christian in me,” Tobianski says. “And can see that being a Christian does mean love. God does love these people.”