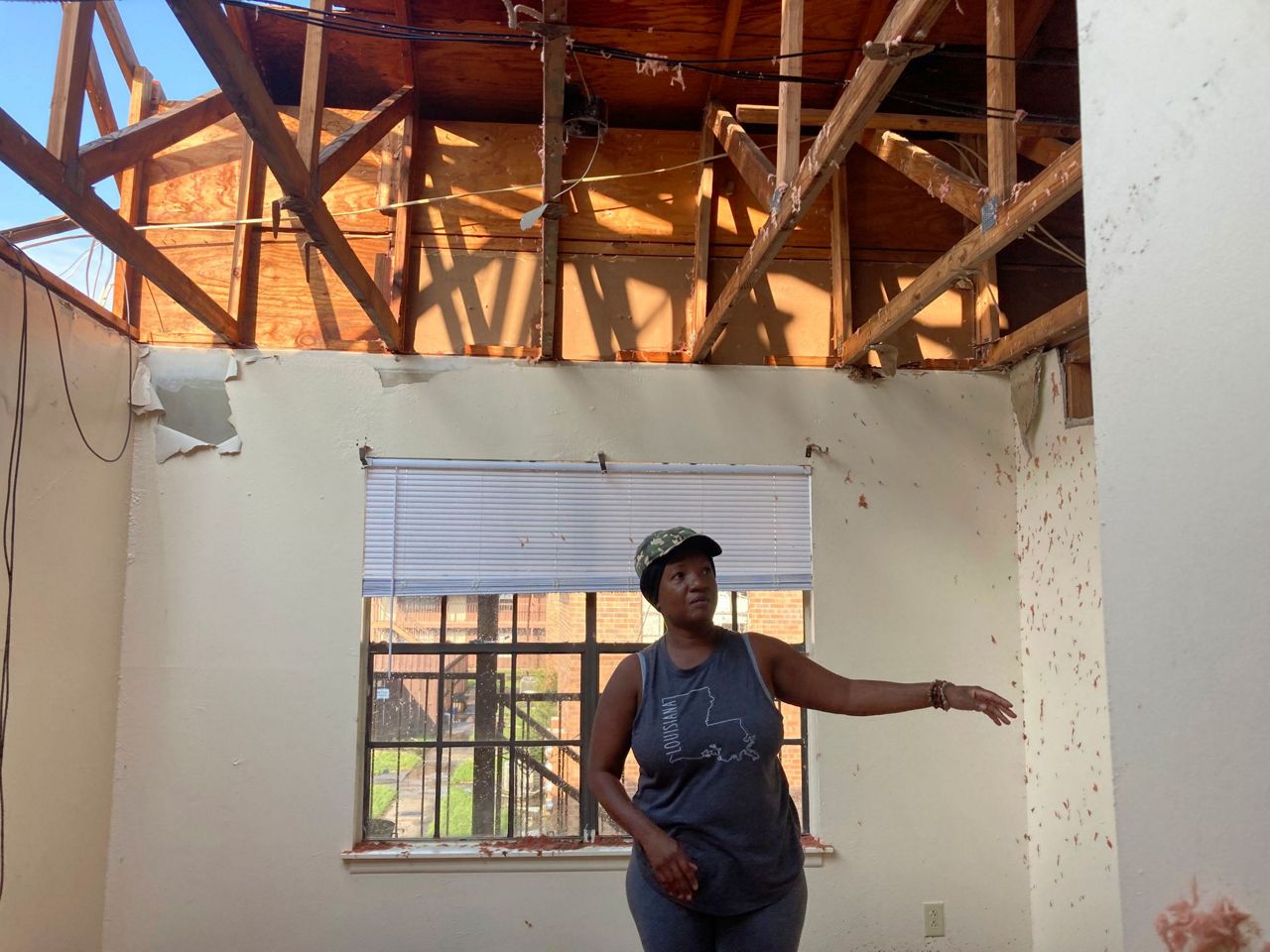 1 of 5
Allison Smith poses for a photo in her Houma, La., apartment, Sunday, Sept. 5, 2021, in the room where she was standing when Hurricane Ida caused the ceiling to crash on top of her. The storm caused such extensive damage to the buildings in the complex that residents have to move out. (AP Photo/Rebecca Santana) 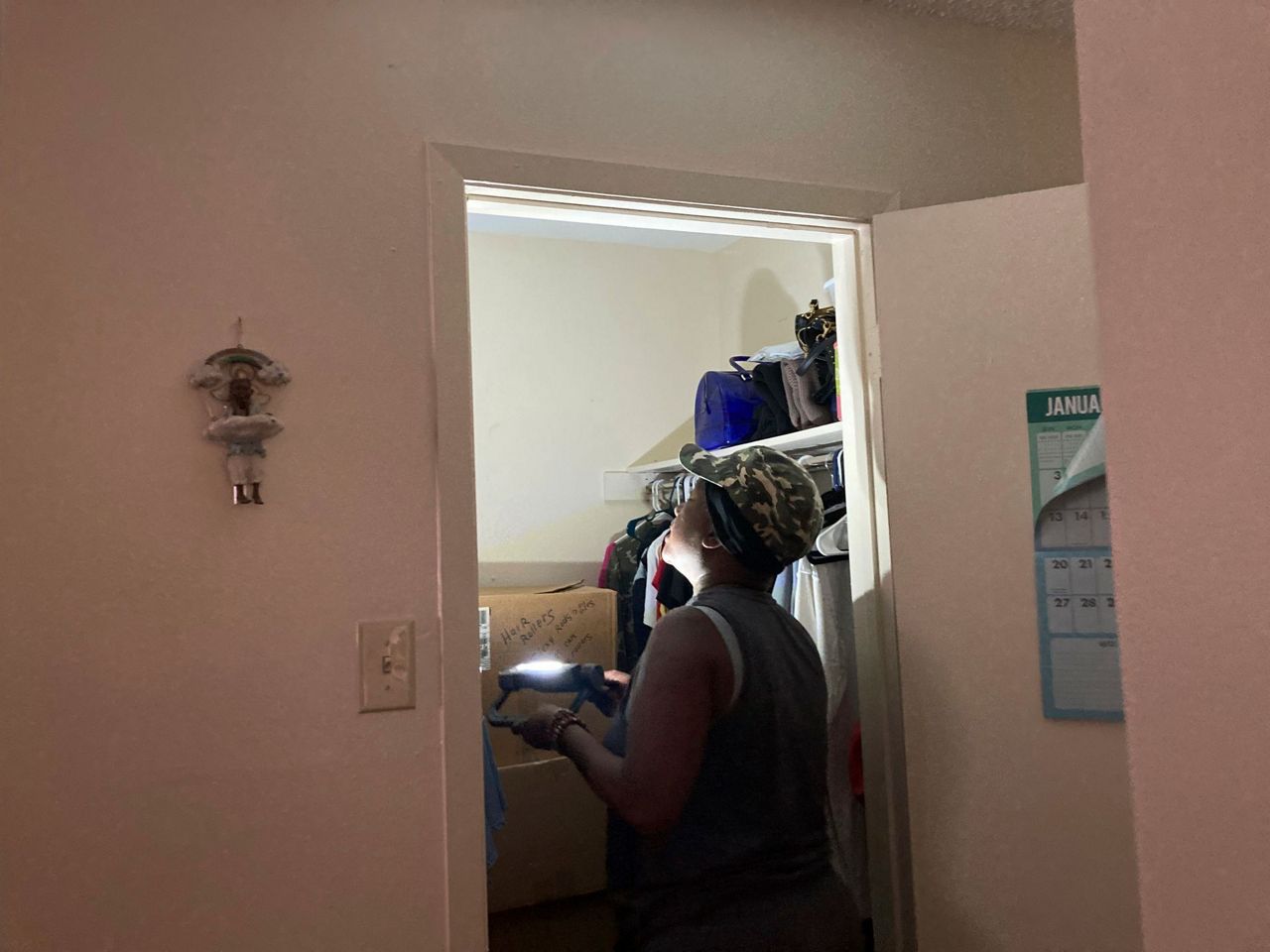 2 of 5
Allison Smith uses a flashlight to look at the ceiling in her Houma, La., apartment, Sunday, Sept. 5, 2021, to see whether there is any damage. Smith was in the apartment when Hurricane Ida came through and caused the ceiling in one of her bedrooms to crash on top of her. The storm caused such extensive damage to the buildings in the complex that residents have to move out. (AP Photo/Rebecca Santana) 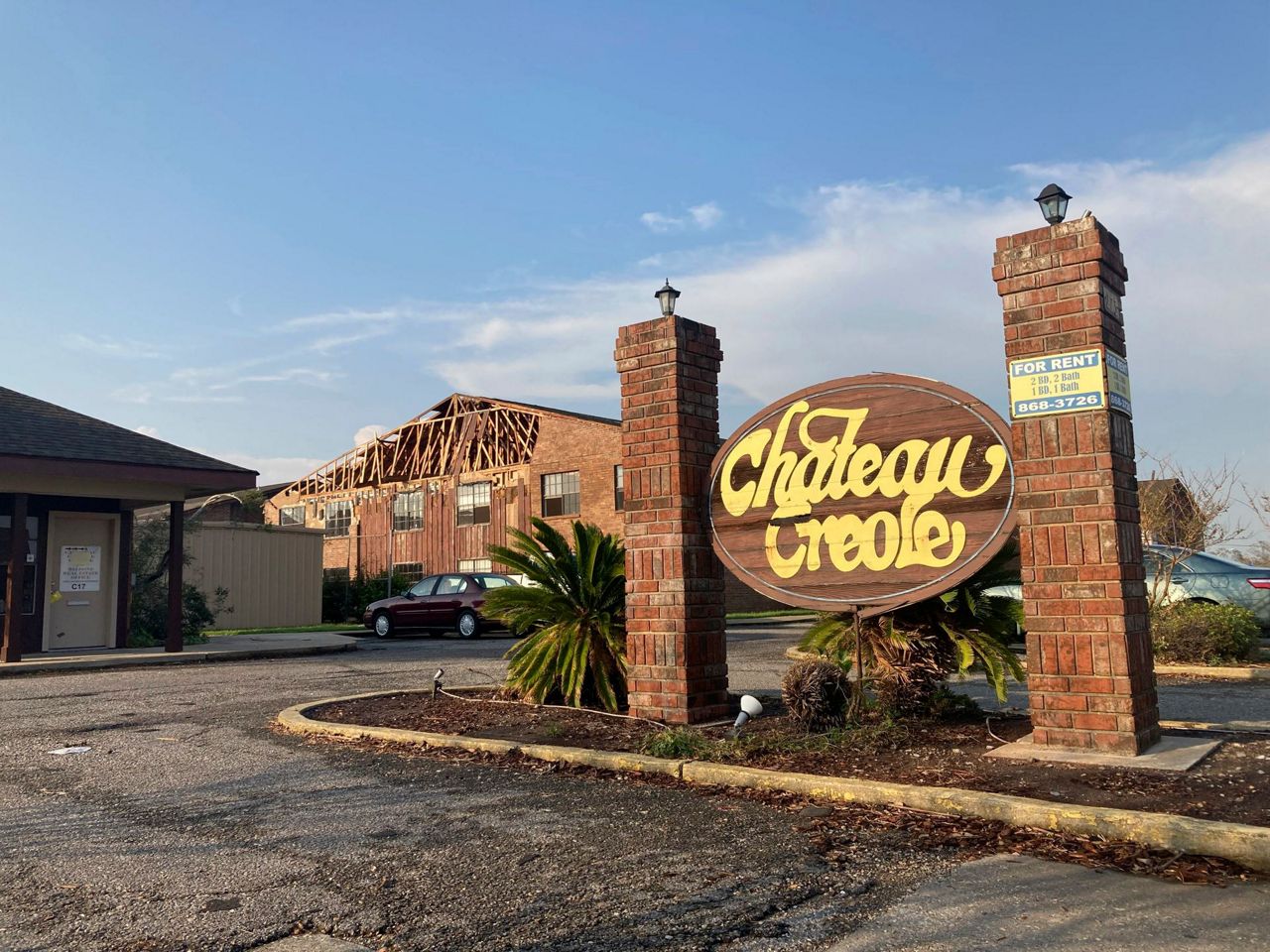 3 of 5
Behind a sign for the Chateau Creole apartment complex, Sunday, Sept. 5, 2021, can be seen damage from Hurricane Ida. The storm caused such extensive damage to the buildings in the complex that residents have to move out. (AP Photo/Rebecca Santana) 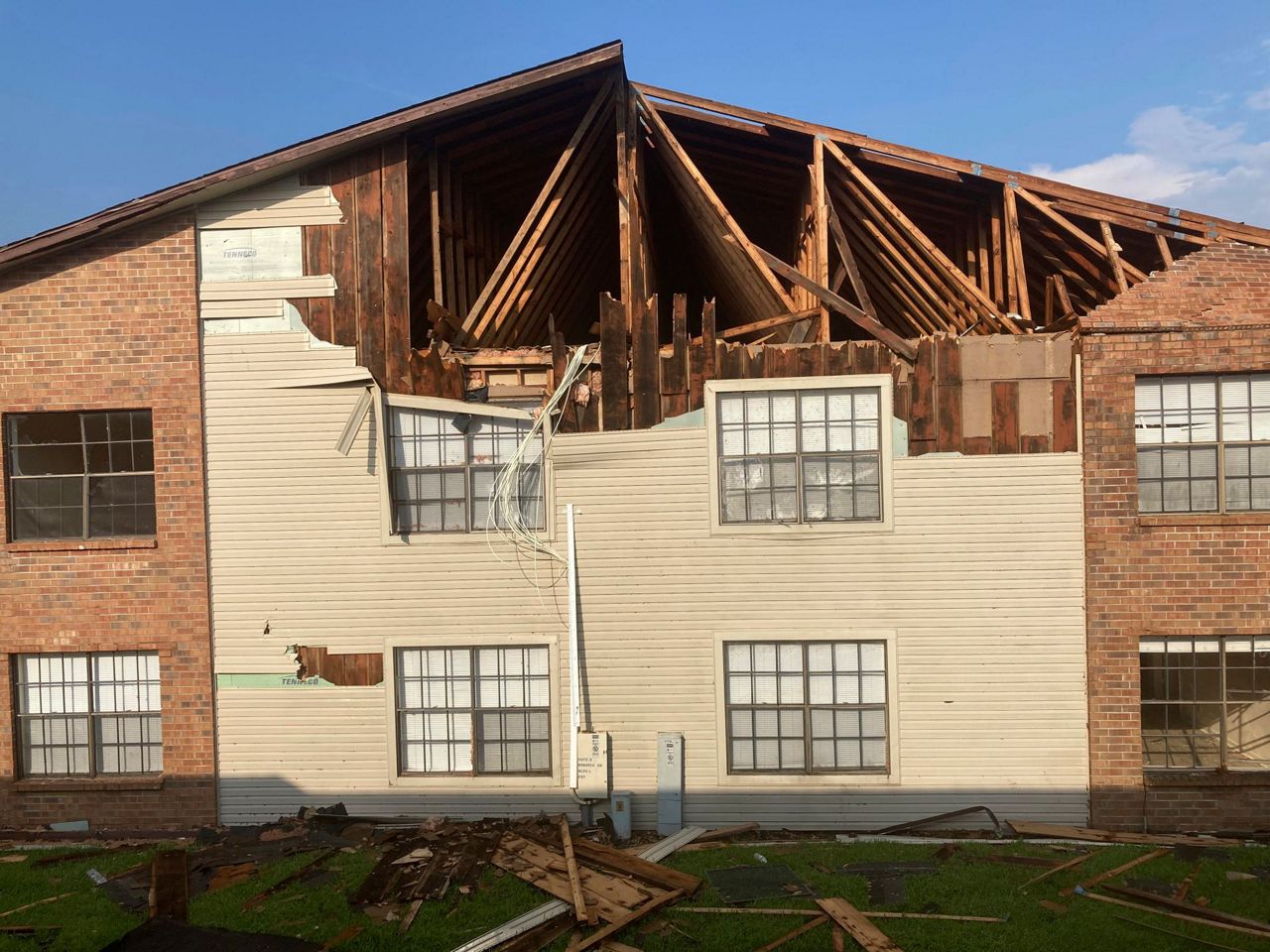 4 of 5
An apartment building in Houma, La., that was damaged by Hurricane Ida is seen, Sunday, Sept. 5, 2021. The storm caused such extensive damage to the buildings in the complex that residents have to move out. (AP Photo/Rebecca Santana) 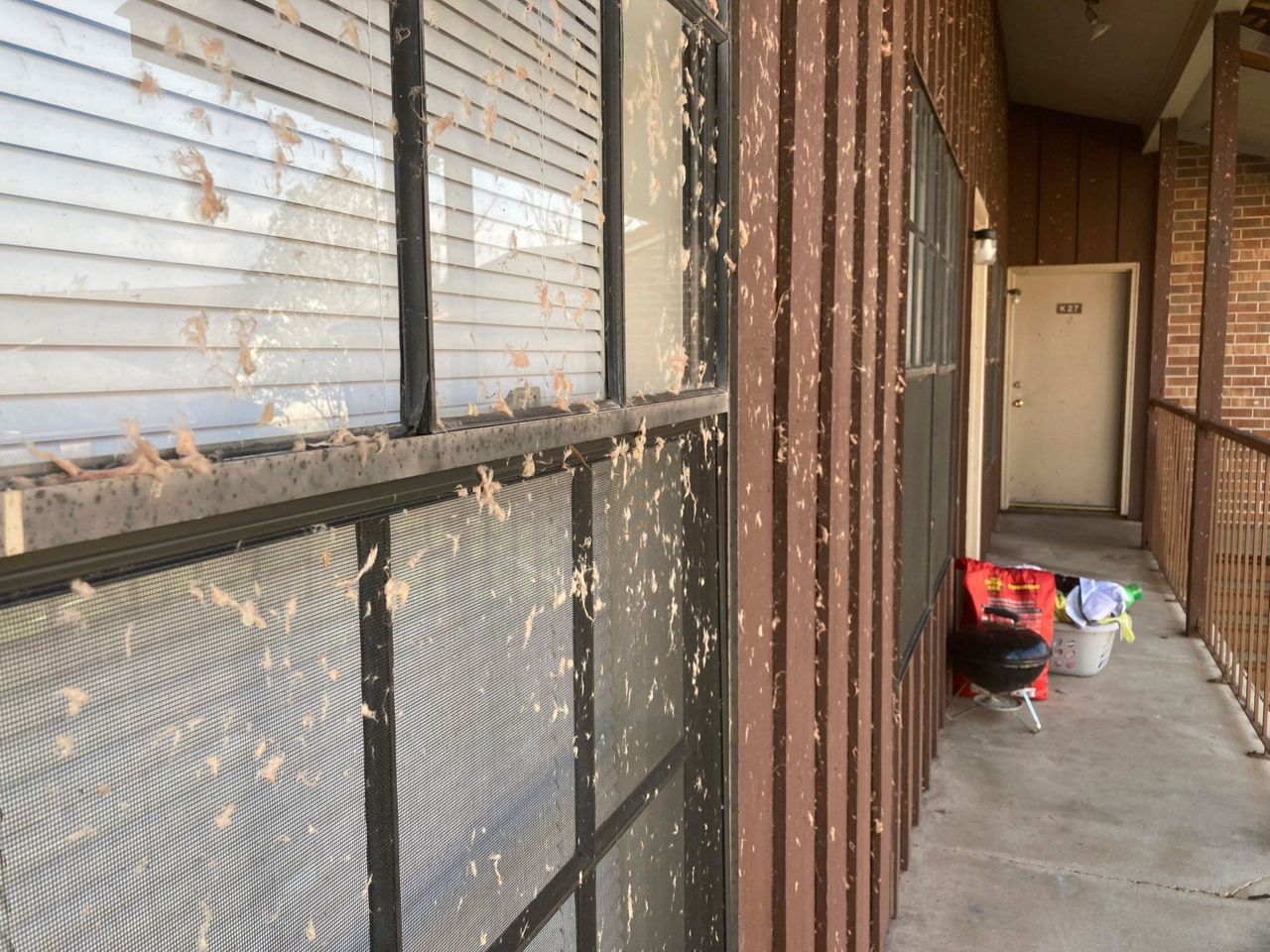 5 of 5
Tufts of pink insulation stick to the outside of an apartment complex in Houma, La., Sunday, Sept. 5, 2021, and behind it can be seen items taken out of one of the apartments by a tenant who is moving out. Hurricane Ida caused such extensive damage to the buildings in the complex that residents have to move out. (AP Photo/Rebecca Santana)

HOUMA, La. (AP) — Allison Smith wasn't thinking about where she'd go next. She'd kept the boxes from when she moved into her 2-bedroom apartment at the Chateau Creole complex a year ago and was planning to fill them with her clothes and other belongings, load them into a U-Haul along with her bed and sofa, and drive it to the closest storage unit she'd found — two hours away. Then she'd think about where to live.

“I haven’t even thought that far,” said Smith, as she and her boyfriend packed.

The residents of the apartment complex loaded up moving trucks, packed up what belongings could be salvaged and contemplated what to do next after Hurricane Ida’s devastating winds and lashing rains rendered what had been home unlivable. For many, there weren't a lot of good options.

Ida swept ashore Aug. 29 and Houma, a town of about 33,000 residents, was the first major population center in its path. Power isn't expected to be restored to the parish until Sept. 29, and that's only for homes and businesses structurally sound enough to take power. Many aren't.

At the apartment complex, shingles littered the parking garage and pink tufts of insulation stuck to the exterior walls. Some of the buildings had lost large sections of siding. In others, the roof decking had ripped off and rain soaked the pink insulation that fell into the apartments below.

When the storm came through, Smith was inside a bedroom in her apartment — K26 — videoing the raging storm outside when her ceiling collapsed on top of her. The bedroom is now carpeted with wet insulation above which you can see the building's frame and blue sky. She spent a hot night in her other bedroom slapping away mosquitos. Now she worries another storm will come and ruin what possessions she has left.

She filed a claim with the Federal Emergency Management Agency; they've given her enough money to pay for a hotel for a week — “That’s a start” — and then she'll figure out her next steps.

At apartment M22, Jordan Howard and his boyfriend had just returned home after evacuating to Texas. They had heard about the complex's damage and that they'd have to move out through other tenants on Facebook but found that their apartment had escaped without any damage.

After making an initial survey their plan was to come back with a moving truck, pack and start over. Before the storm, Howard worked as a front desk clerk at a hotel but said it was now closed. They're weighing what to do next — stay in Houma where Howard has family or start over somewhere else — somewhere with electricity. It was a decision he thought a lot of people might also be making considering how extensive the damage was in Houma.

“So many people are going to have to leave, and I don’t think a lot of them are going to come back,” he said.

When Hurricane Ida swept through Houma, Jason Cole was in his first floor apartment — J17 — looking at the damage happening outside. After the storm, he and his son and some other relatives went to Morgan City, about 35 miles (56 kilometers) away, and rented a hotel room. But they had to leave when the hotel gave the room to workers coming to restore the electricity. On the way back, his car broke down and he had it towed back to the apartment complex where a friend was making repairs.

He and his son were currently living with his godchild across the street, but storm damage might force her to move out as well. Cole was also without a job after the hurricane destroyed the shrimping business where he used to be a driver.

He had been able to salvage some clothes from his apartment, and like many in the Houma apartment complex he was trying to figure out what to do. He'd heard from other residents that they had to be out by Tuesday, and he knows how extensive the damage is across town. If nearby hotels do have rooms, he said, they're not doing weekly rates so there's always the concern he'd find a room only to have to move out the next day.