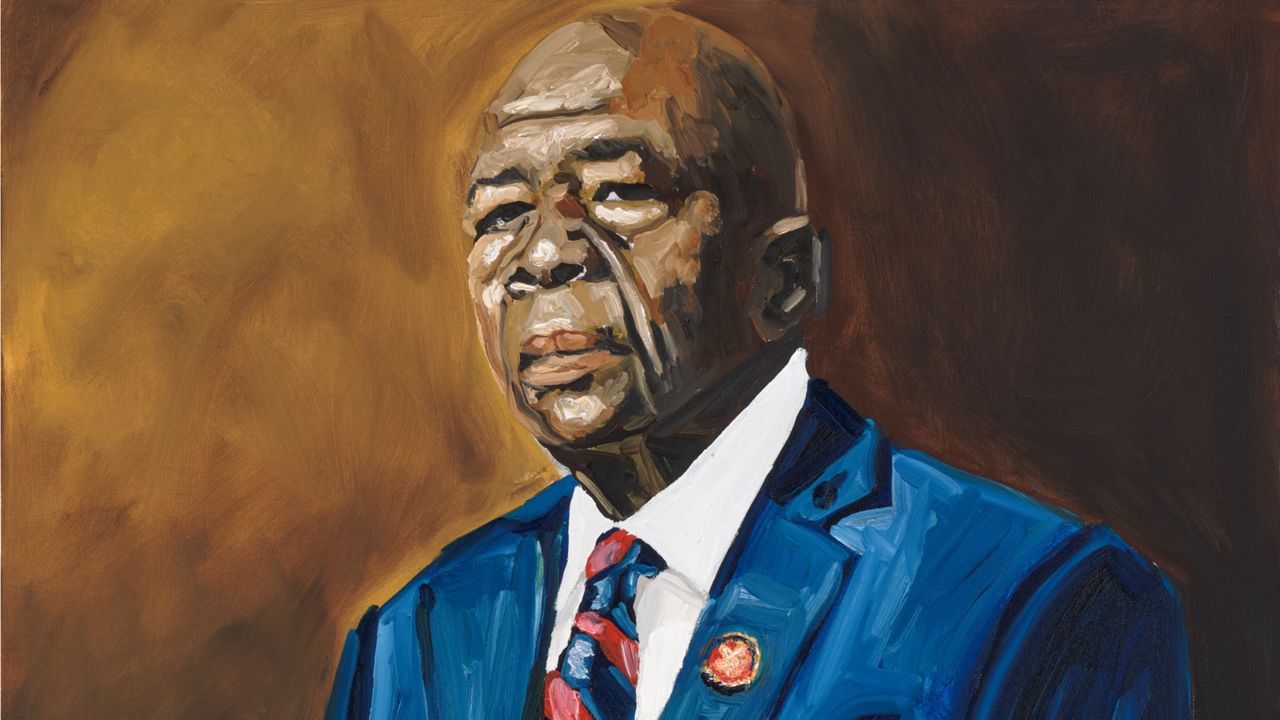 At 27 years old, Jerrell Gibbs was a college dropout, working two jobs, and trying to find his calling in life. One night during a break at his second job, Gibbs sat down and began to draw.

“[I] sent a picture over to my girlfriend at the time [now Gibbs’ wife], and she didn't believe that I drew the picture because it was so good,” he said. “The following year for Father's Day, she got me an easel and some painting supplies as a Father's Day gift, and I haven't put the brush down since.”

Now 33, Gibbs is making a name for himself in the art world. He graduated from the Maryland Institute College of Art in 2020, and has had his work exhibited at the Reginald F. Lewis Museum, The Galleries at CCBC and The Gallery at Howard University. Gibbs also has work that is part of the permanent collections at the Columbus Museum of Art, CC Foundation, X Museum, Baltimore Museum of Art and the Los Angeles Museum of Art. He's also preparing for an exhibit later this year in Paris.

But one of his most recent works, a single portrait, is what has drawn widespreadattention and acclaim: the official portrait of Rep. Elijah Cummings.

Cummings, a noted civil rights activist and a 23-year veteran of the US House of Representatives, died in October 2019 at the age of 68. After his death, he made history once again as the first Black lawmaker to lie in state at the U.S. Capitol.

In early 2019, Cummings had been elected chairman of the House Committee on Oversight and Reform, and the chamber where the committee holds hearings has since been renamed for the civil rights icon. The committee requested that his widow, Maya Rockeymoore Cummings, lead the charge in commissioning a painting to honor its former leader.

“We did want the person to be Baltimore based, Baltimore trained, even Baltimore born, and I think that that really relates directly to Elijah's very profound and enduring commitment to the city,” said Christopher Bedford, director of the Baltimore Museum of Art, who was a part of the search committee.

“We came up with about 30 people to evaluate and of course, we were looking for particular characteristics," Bedford added. "A background in portraiture itself was important, that the person ha[d] a pre-existing affiliation for the human form.”

Gibbs was one of those 30 artists being considered for the honor.

“I think when we saw Jerrell's work, and we spent time with him in his studio, and thought about his path to becoming a painter and into the art world and related it to the kind of advocacy work that Congressman Cummings did, he seemed like a really self evident and very compelling choice,” added Bedford.

After the studio visit, Gibbs was chosen as one of three finalists for the commission. He would have to submit a sketch for final consideration before a decision was made. It was this part, Gibbs explained, that was the most challenging for the young artist.

“I don't do sketches for my works. My paintings are a process driven work of art in itself," he said. "You'll see the sketch in the painting, you'll see [the] addition, subtraction. I’m adding and [I’ll] takeaway consistently."

"You’ll see smears, you'll see the process of creating in the painting,” Gibbs explained. “I don't like for it to look like a finely tuned finished piece, because I kind of relate my work to who we are as humans. We are a constant work in progress, we're never perfect.”

After a handful of attempts and being his own worst critic, Gibbs found all of his sketches to be unsuccessful. So he turned in a painting instead of a sketch.

And the gamble paid off, earning him the commission to paint the late Congressman.

“80% of the time, I was just nervous,” Gibbs recalled. “I put a lot of pressure on myself to really execute in a way that I feel people deserve. When people reach out to you and they want something done, they’re not just expecting you to do the job, they want you to do the job in a manner that really honors or brings to light the qualities that we have come to know.”

Gibbs spent hours watching speeches old speeches Cummings gave on Youtube, reading the late congressman’s book, “We Are Better Than This,” and listening to music from "The Lion King," which Cummings' widow told Gibbs that her husband enjoyed.

Then Gibbs began to paint.

“Throughout the year, I couldn't even count how many hours I invested into painting that one portrait in its entirety,” said Gibbs, who said there were 6 or 7 versions of the painting before he decided the piece was finished.

“I know when a painting is done, because I just know to stop. There’s nothing else to add, there’s nothing else to take away,” Gibbs explained. “It got to a point where I knew like this was a spoke to me, I felt his energy. I was able to capture his essence his or like, all of that in that painting, and I knew it and anything else would have been doing him a disservice.”

After trying to embody and understand Cummings during the process, Gibbs said it was vital to him to capture the civil rights leader’s strength and empathy. “I really wanted to focus on who he was beyond the titles, beyond where he came from, just as a human, explained Gibbs. “Those were the things that really resonated with me, and that I thought were very important to capture.”

“I wanted people to be able to look at that painting and say, ‘Wow, there's Elijah,' and remember who he was as a human being,” he added.

“I think it's a magisterial achievement. Jerrell pushed himself considerably,” said Bedford of the finished piece. “I think he wanted to honor Elijah in paint, and he very much achieved that.”

Gibbs had to keep the commission a secret for the better part of six months before it was finally shared with the public at an unveiling on December 22 at the Baltimore Museum of Art. After less than three weeks on display, it was taken off display until it will be unveiled in its new home, the US Capitol.

According to the House curator’s website, just 10 portraits hang in the U.S. House collection depicting black American lawmakers. (Spectrum News reached out to the House Curator for comment on whether there was any effort to grow the collection to be more inclusive and representative of America, but the curator’s office replied that it is not in their policy to be quoted or cited for an interview.)

For Gibbs, it has yet to set in that his work will be displayed in the Capitol. He told Spectrum News that he was just starting to wrap his mind around it following a conversation with his cousin.

As for what come next, Gibbs says he is looking forward to the unveiling of the portrait, expected some time this spring at the Capitol, though a date has not been set for its unveiling at its permanent home.

But for now, the Baltimore artist says he is feeling grateful for the opportunity, and the impact that Elijah Cummings had on his life, both in life and death.

“I'm sure what he's done for Baltimore has impacted me in more ways than I can imagine. But now, it went even further. Now one painting [of Cummings], that's bringing me blessings and joy and other opportunities,” said Gibbs.

“Being from Baltimore, born and raised in Baltimore, being able to contribute in that manner. It's for the home team.”