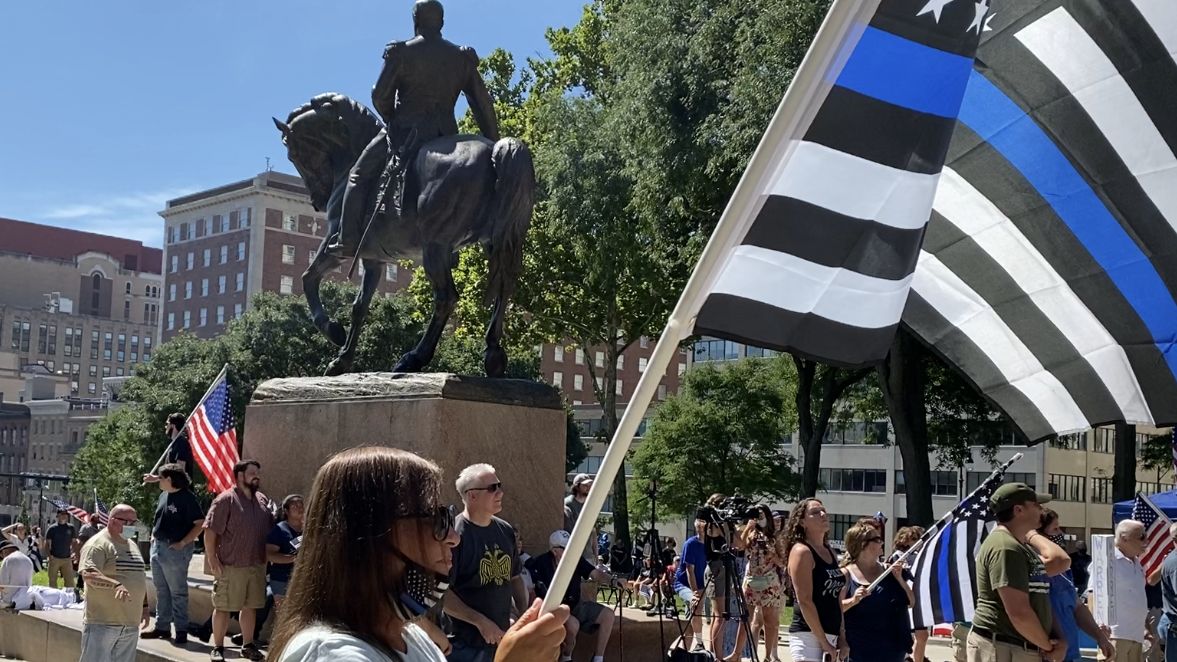 “Back the Blue” Rally Turns Chaotic in Albany, Day Ends With Important Conversations

Patriotic chants were heard from the steps of the state capital in Albany on Saturday, as a crowd gathered to “back the blue.”

The rally was in support of those who serve as police officers across the state, as well as thanking those who put their lives on the line.

Justin Miller is an EMS worker and firefighter near Schenectady. He came out to support officers.

“No matter who your party line to support people in a uniform, no matter what branch of service they are in, [they are] crucially important to our republic,” Miller said.

But among those in the crowd were Black Lives Matter protesters. They created a “counter-protest”, and say they came out to call for police reforms and remember the unarmed Black men and women who have died by officers hands across the country. Lukee Forbes from One People United also brought up police-involved incidents occurring in Albany.

“This is something that’s been going on for 429 years. There’s no reason why these people are able to stand here and act like nothing’s going on, I’m out here for no reason,” said Forbes.

“I stopped one man and said 'I hope you realize, that it’s not mutually exclusive to support the police and not believe that Black Lives Matter,'” she added.

That man was Bugati Holly. He has been at the front of the Black Lives Matter protests around the Capital Region.

I would say about half of the rally goers cleared out after the violence broke out at today’s #BacktheBlue rally in #Albany pic.twitter.com/p2ucLu6e9c

“We need the police, we don’t need bad police. When we say Black Lives Matter, there’s a big difference between defund the police, abolish police and we need reform. No one is trying to abolish the police,” said Holly.

As the rally has ended, people from both sides are sticking around and having peaceful and important conversations @SPECNewsAlbany pic.twitter.com/d0IhkOeIpi

But as Holly was being interviewed, chaos broke out. Spectrum News had to stop the conversation with him as violence erupted throughout the crowd. The police stepped in to control and disperse the tension, while still allowing both sides to exercise their first amendment rights.

As hostility began to die down, the Black Lives Matter supporters joined in on those “back the blue” chants.

“I say we back the police because there are good cops in that force. The blue wall of silence stops these officers from being as good as they want to be,” says Forbes.

And as the rally ended, the important conversations continued. Even after the majority of the crowd dispersed, both sides could be seen having productive conversations. Those who spoke with Spectrum News say having communication is a big step in creating change.

“We got to work to change the narrative, we have to change how everyone thinks. This is wrong and it’s all wrong. And what’s going on I noticed is miscommunication,” said Holly.

“I think that if we came mutually to the table, there may be something that we can intelligently and civilly to get to the ends of the mean,” added Miller.

State police say no officers or anyone who attended the rally were injured in Saturday’s events. No arrests have been made.