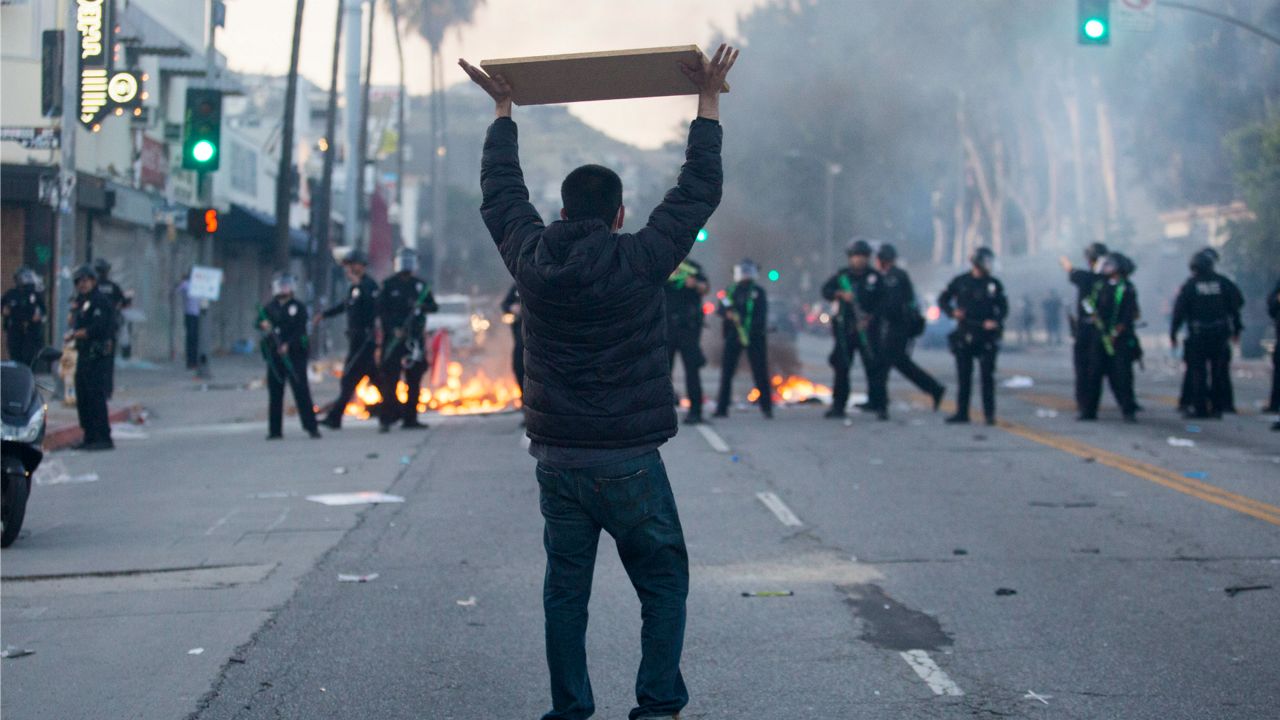 A protester yells at police while protesting the Monday death of George Floyd, a handcuffed black man in police custody in Minneapolis, in Los Angeles, Saturday, May 30, 2020. (AP Photo/Ringo H.W. Chiu)

LOS ANGELES — Police continued to arrest people Sunday who were looting stores or were on the streets in violation of a city curfew, following a fourth night of protests tied to the in-custody death of George Floyd in Minneapolis.

Peaceful demonstrations Saturday turned violent and unruly, prompting Gov. Gavin Newsom to declare a state of emergency and deploy up to 1,000 National Guard troops after crowds poured into the Fairfax District, downtown, and onto Beverly Boulevard, with many taking over the intersection of Third Street and Fairfax Avenue, shutting down traffic.

Police were out in force Saturday across L.A., trying to hold the peace amid multiple protests tied to the police killing of George Floyd in Minneapolis.

A curfew was imposed in Los Angeles for 8 p.m. Saturday until 5:30 a.m. Sunday. The curfew was initially for only the downtown area.


Other cities imposed curfews for the same hours include Beverly Hills, West Hollywood, and Culver City.

In L.A.'s Fairfax District, thousands of demonstrators converged, with many taking over the intersection of Third Street and Fairfax Avenue, shutting down traffic. At the nearby intersection of Third and Edinburgh Avenue, several police cars were vandalized and rubber bullets were fired to try to control the crowd.

We will always protect free speech and Angelenos’ right to live without fear of violence or vandalism. To increase safety for demonstrators, law enforcement and all citizens of Los Angeles, we are putting a curfew in place from 8 p.m. to 5 a.m.
https://t.co/vy3XM760qb

Police tried to hold the line against further advancement, and could be seen engaging in scuffles with some protesters, with some officers using their clubs.

Police later brought in large, military-style vehicles to clear the streets, and some sign-carrying protesters chanting "Eat the rich'' came to Beverly Hills' famed shopping street Rodeo Drive. The windows at scores of stores were broken, with people moving in and clearing shelves of pricey merchandise.

The Fairfax District gathering followed a noon demonstration at Pan Pacific Park, at 7600 Beverly Blvd. A handful of similar demonstrations were planned for other areas of the city Saturday, including a 3 p.m. event in Boyle Heights.

Just arrived on the scene in the Fairfax District where protesters are being held back by police pic.twitter.com/X9PRb2lOFX

Garcetti and other officials announced a hastily scheduled news conference at 3:30 p.m. to address what the city is doing to keep the public safe. Police had prepared for another challenging day after multiple businesses were looted and hundreds of protesters arrested Friday night in downtown Los Angeles, amid demonstrations against police brutality following Floyd's death on Monday.

Los Angeles Police Chief Michel Moore said earlier Saturday that all restrictions had been lifted in the downtown area, and appealed for calm.

"While more protests are slated for various locations throughout the city today, we remain hopeful those demonstrations will be peaceful,'' Moore said in a series of tweets sent shortly before noon Saturday. "I am asking for all of Los Angeles to come together and find the ability to peacefully express individual and collective grievances while also maintaining the safety of all of Angelenos,'' he said, adding that the LAPD will be deploying additional resources to maintain order.

Large and violent protest occurring in the area of Beverly Blvd and Fairfax Ave. Do not endanger yourself and your loved ones.

Stay away from the area. Large amount of protestors and police presence.

Moore said 533 people were arrested overnight Friday on charges that include burglary, looting, probation violation, battery on a police officer, attempt murder and failure to disperse. All but 18 have been released. Arrest numbers for Saturday will not be available until later on Sunday, police officials said.

Saturday's events were scheduled to begin at noon, with a demonstration calling for justice for Floyd and immediate safe release of prisoners in the Men's Central Jail and Twin Towers Correctional Facility. Demonstrators met on the corner of Alhambra Avenue and Vignes Street, then caravaned to the jail facilities with a rally at LAPD headquarters. That event is organized by the National Alliance Against Racist and Political Repression.

Also at noon, Black Lives Matter Los Angeles held a rally at Pan Pacific Park. Another protest, hosted by the Coalition for Community Control Over the Police, was set for 1 p.m. outside LAPD's Southeast Station, 145 W 108th St. and included a march to the Los Angeles County Sheriff's office at 1310 W. Imperial Highway.

People took to the streets Friday for the third consecutive night to demand justice for George Floyd, who died Monday after being handcuffed and pinned to the ground by a white Minneapolis Police Department officer, Derek Chauvin, who pressed his knee on the 46-year-old man's neck for several minutes while three other officers looked on.

#HappeningNow A group of people paint over graffiti at the corner of Fairfax & Rosewood. pic.twitter.com/rTIkrtNS9j

Video footage of the arrest, in which Floyd is heard saying "I can't breathe,'' spread widely online, and all four officers were fired. Chauvin was charged with third-degree murder and second-degree manslaughter on Friday.

The LAPD was placed on tactical alert at 2:20 p.m. Friday as a precaution ahead of the protests, according to Officer Tony Im.

"While the vast majority of individuals in Los Angeles have expressed those views in a peaceful manner, we have witnessed an increasing level of violence and property damage committed by a small number of detractors,'' the LAPD said in a statement issued Friday afternoon.

The issuing of a tactical alert requires all on-duty personnel to remain on duty, Im said.

"We're going to have more people on-duty because staff is not going home... For example, all the day watch people stay on and the night watch people have started, so we have double the amount of staffing,'' Im said.

As Los Angeles firefighters arrived to extinguish the flames, someone in the crowd grabbed a department fire hose and tossed it into the fire burning in the intersection. At least one Los Angeles Police Department cruiser was tagged with graffiti.

Police set up skirmish lines throughout the downtown area and, in at least one instance, fired non-lethal ammunition as they pushed a crowd out of the area, some in the crowd stopping to hide behind vehicles to throw objects at officers. A person answering the phone at the Metropolitan Detention Center could not give an exact number of arrests, but stated it was a "busload.''

The looting came about four hours after several people were detained shortly before 7 p.m. near Fifth and Olive streets for allegedly throwing objects at officers and damaging police cars that were parked near the intersection. A protestor was seen on video spraying a fire extinguisher at officers, then running through the crowd spraying fire retardant.

"I'm sorry that L.A. failed tonight,'' Moore told reporters Friday night. "Our ability to have a demonstration, express our views, our anger, our disgust unfortunately turned into an unruly situation with officers being injured, property damage occurring.''

An officer was put in a chokehold and kicked by some protesters in the Pershing Square area. It was not clear if this was the same officer who was sent to a hospital with injuries from a confrontation with demonstrators. LAPD Capt. Gisselle Espinoza told reporters it was disappointing to see protestors attack the officer.

Shortly before 7:30 p.m., a group of about 100 blocked traffic on the Harbor (110) Freeway, near the James M. Wood Boulevard exit. They were cleared from the freeway, but re-entered near Fifth Street at 8:20 p.m.

KNX Newsradio reporter Pete Demetriou was attacked during the protests, he said on Twitter. About five people punched him before others came to his aid, and a woman grabbed his microphone and yelled obscenities into it, but he was able to push her away. Photos posted by Demetriou showed items confiscated by officers, including brass knuckles, knives, bottles of urine, spray paint cans and a gun that fires pepper balls.

People were advised to get off the streets and businesses were told to close in the downtown area from the Santa Monica (10) to the Santa Ana (101) freeways and the Harbor (110) Freeway to Alameda Street. A helicopter announced that those left protesting could be arrested. Garcetti sent a message on Twitter at 10 p.m. Friday calling for calm.

"I believe in our city. L.A. is strong enough to stand for justice and walk in love,'' Garcetti said. "We respect every Angeleno's right to protest, but violence and vandalism hurts all. Let's remember why we march, protect each other, and bring a peaceful end to a painful night.''