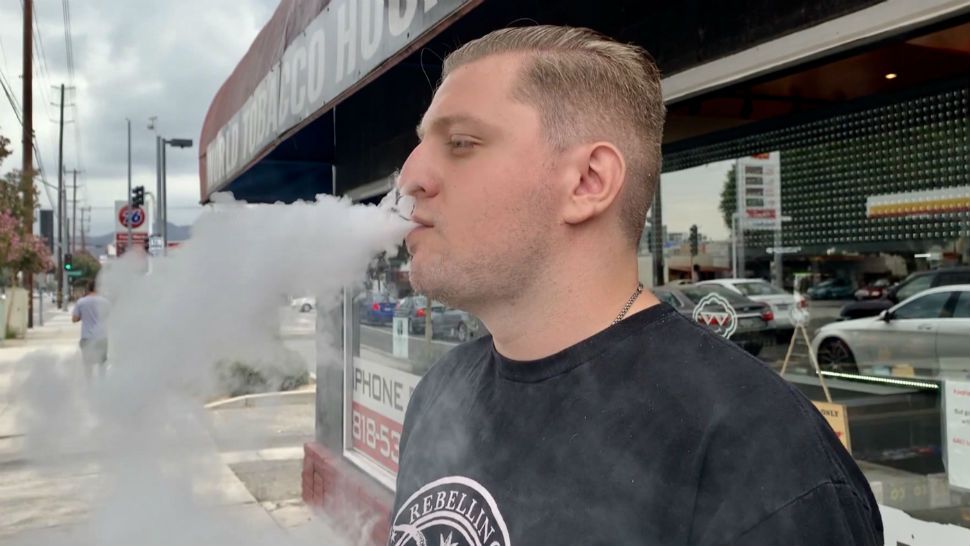 BURBANK, Calif. – Harry is a Burbank resident that has been vaping for four years now. He frequents Vape Crave, a local e-cigarette shop for all of his vaping needs.

He doesn’t think the city should restrict the use of e-cigarettes in public places, because he believes there should be freedom in common areas.

“I understand where they’re coming from about it, like you know if there’s a lot of people in that area and they’re smoking, like I can see how it can irritate them. But I mean you’re kind of like infringing on our right to smoke. I mean if I want to smoke, who are you to tell me that I can’t smoke in a public place,” Harry said.

As he refills a vape with a flavored juice, Harry used to light cigarettes in his past. He says vaping has helped him quit traditional smoking, and it hasn’t caused him to feel sick at all. At 25 years old, he says he feels healthy.

“When I go take my physical I have them check my lungs, I’m fine. There’s no issues with my vape. My doctor still doesn’t even know I smoke. They just say you have healthy lungs,” he explained.

But that hasn’t been the case for everyone. Burbank’s City Council has called it a “public health concern” due to recent illnesses and deaths related to vaping across the country. Alex, the manager of Vape Crave, says people don’t understand that many of these deaths are related to toxic chemicals found in THC filled vape devices, which differ from the nicotine based liquids found in e-cigarettes.

“This flavor ban just kind of took everybody by surprise. Like they can ban vaping within a matter of days, yet we still have like illegal black market marijuana in the streets, you know AK47s and guns that are being sold to people who shouldn’t have guns. I think if they could regulate this within a couple days, they could definitely fix the other problems that are going on in this country,” said Alex.

Harry thinks people don’t understand the benefits of vaping, pointing to his own experience.

“It’s not as addictive as you think it is. To me personally, it’s a lot safer than cigarettes or hookah,” said Harry.

As investigations continue, the jury is still out, on the specific impact these vape devices are having on our health.

While Harry has fortunately not experienced any illnesses associated with vaping, health officials still encourage the public to refrain from using e-cigarettes.