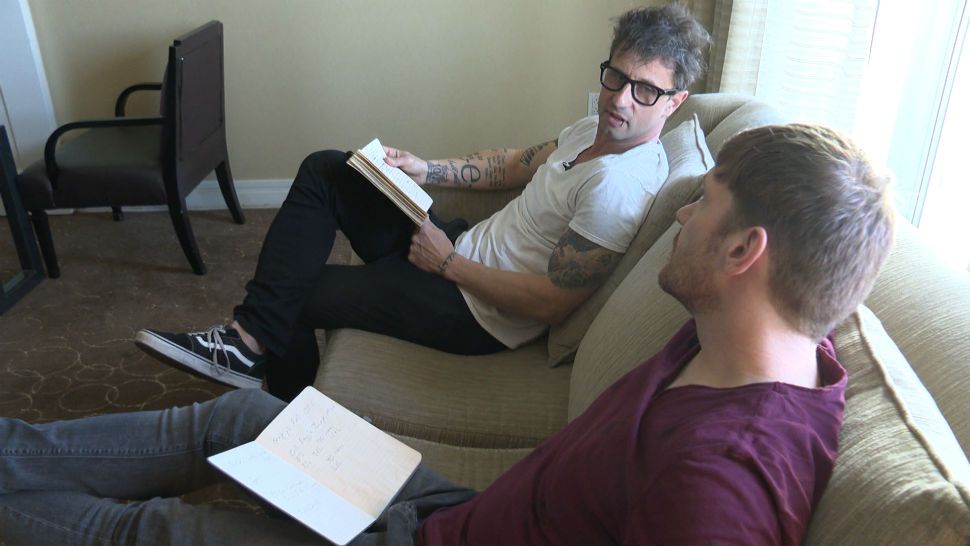 LOS ANGELES – His deepest darkest thoughts turn into lyrics, but songs only come to life when Eric Bass can get up. It was a song his Shinedown bandmate, Brent Smith, wrote that changed his life.

“I look over my shoulder and I said ‘you know what this is about right now?’ He said ‘yup it’s about me,’” Smith said.

“I knew exactly what it was about, instantaneously,” Bass said.

“Get Up,” Shinedown’s hit song, is about Bass’s battle with clinical depression. The band says its lyrics about mental illness have never been more relevant to society and have never resonated more with their audience.

“I was thrust into having to talk about my depression and anxiety that I never had to articulate anybody other than my band and my wife. It is been probably the best therapy I’ve ever had,” Bass said.

It helped him understand the beast that is depression.

As the band spends time in L.A. filming videos for the remaining songs on their album Attention Attention, they hope songs like “Get Up,” remove that weight or at least start to lift it.  Just look around us, the guys said - mental health issues are everywhere.

“People literally going into Walmart and shooting people. Something is off,” Smith said.

But Bass says medication isn’t the answer, it’s another problem.

“A lot of these kids are given pills and medicated to a point because that’s the simple answer. For people to prescribe things to people. Take this and you’ll feel better. That’s not the case I know firsthand I was actually darker when I was taking medication,” Bass said.

Facing depression head on, actually talking to someone about it, may be harder to swallow, but Bass says it’s the only way to lift that weight.

Smith may have written “Get Up” for Bass, but it's not just about him.

“Just count it out, 1,2,3…move. As you say move, get out of bed. Get going,” Smith said. “It’s not for the person with depression it’s for the people around the people with depression and really getting them to wake up and realize their friend and neighbor might really be sick and I really need some help… And in that the individual will get help and inspiration from the lyrics.”

Knowing someone cared enough to get up for you on days you couldn’t get up yourself.