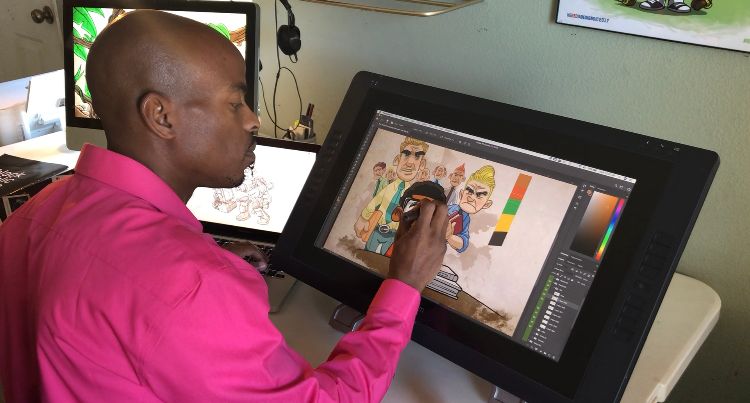 SANTA CLARITA, Calif. -- In the process of creating David Heredia is hoping to inspire.

On this day, he’s putting the final touches on his latest Hero. He’s telling the story of Doctor Ronald McNair as part of his Heroes of Color animated Web series.

Dr. McNair was a renowned physicist, astronaut and the second African-American to fly into space.

It’s an idea he came up with after visiting a comic book store. As he and his children combed the racks of comics, they noticed a lack of diversity.

"We actually looked for either, African-American, Latino, or Asian superheroes, and I couldn’t find any, I found one, this is before Black Panther hit the movie theaters," said Heredia.

Heredia was born in New York to Dominican parents. His wife is Mexican and he wants their children to be able to relate to the super heroes they see on TV and in comic books. He set out to create a comic book superhero but shifted his goal after discovering so many real life heroes of color that are rarely talked about.

His first segment released in 2015 was on the Harlem Hellfighters, the US army’s 369th infantry regiment, one of the most celebrated African-American military units in U.S. history. Each episode is about three minutes long and so far, he’s produced four.

Now he’ll be able to complete more after winning a national grant from Black Public Media’s 2019 Pitch Black Awards. As he moves forward, creating more episodes, Heredia says his children will  be an intricate part of the creative process, giving their input on the segments.

“I say they look really cool and that I think and I think you should make another one for it because that one is really nice and I want to see what happens next,” said Heredia's daughter Josefina.

Heredia's son, David Jr., likes the story of Gaspar Yanga, who led one of the most successful slave revolts of the America’s. He says its because Gaspar Yanga has  brown skin and curly hair like him.

Like his son, Heredia is hoping children not only identify with the heroes he highlights, but that they also learn from them and are inspired to become heroes themselves.