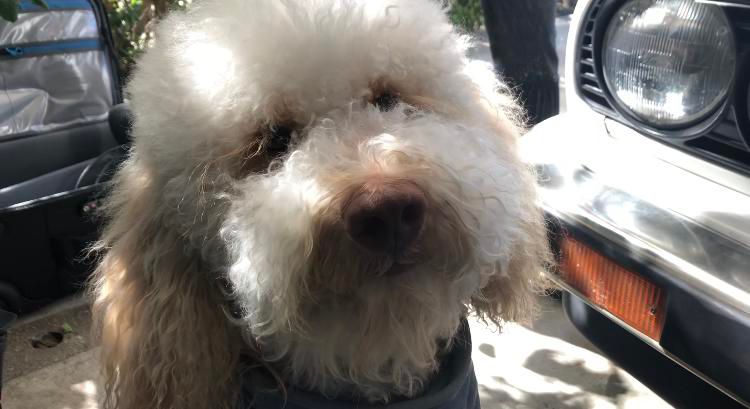 Rescued Puppy and Owner Do Outreach to Homeless People With Pets

He may be just a puppy but Wellington Jr. has a pretty big job.

Several times a week Wellington Jr. and his owner Pina De Rosa visit drop off locations to collect items for Mission Wellington as part of their non-profit treatsforpups.com.

De Rosa took me to one of her drop off locations inside the Petco on West Victory in North Hollywood. Here, people are able to drop off blankets, food and other pet essentials that she gives to pups living with owners who are homeless.

It’s a project that started about five years ago with De Rosa’s first dog, Wellington Sr.

“Yeah, he was my heart, my soul, and it’s his gift. They say that when a dog passes away that they leave a gift that you unwrap after they go. It’s easier for me to do this, then to miss him,” says De Rosa.

After Wellington Sr. passed away she adopted Wellington Jr. when she found him rummaging through a recycling center in Bakersfield. On this day, De Rosa, her friend Nadia, and Wellington Jr. put together bags filled with treats, blankets, food, and other pet essentials.

This time, they have to pack two cars because not everything fits in De Rosa’s small car.

“I think having so many donations that my car is not big enough is a good problem to have for sure,” she says.

Minutes later they arrive in skid row in downtown Los Angeles where there are blocks of people living in tents, many with their pets.

De Rosa has gotten to know many of the pets who live here, including Scooter. His owner didn’t want to be on camera but she gets weekly visits from De Rosa. Many of the people who receive mission Wellington bags are regulars. Others are new to the area.

Tasha has been living on skid row for two years with her cat Wishy Mama and says the help that Pina brings gives her the peace of mind that while she may not have a house, her pet has everything she needs.

Since 2014, Mission Wellington has helped more than 500 pets. De Rosa says one of the main reasons she does this is because she knows many of the people she helps won’t go to a shelter, because their pets are not allowed in several facilities.

“Maybe one day I’ll have enough money to build a Mission Wellington shelter and welcome people with their cats and their dogs,” she says.

Until then Pina says she’ll keep doing what she can to help pets and their owners who are living on the streets.