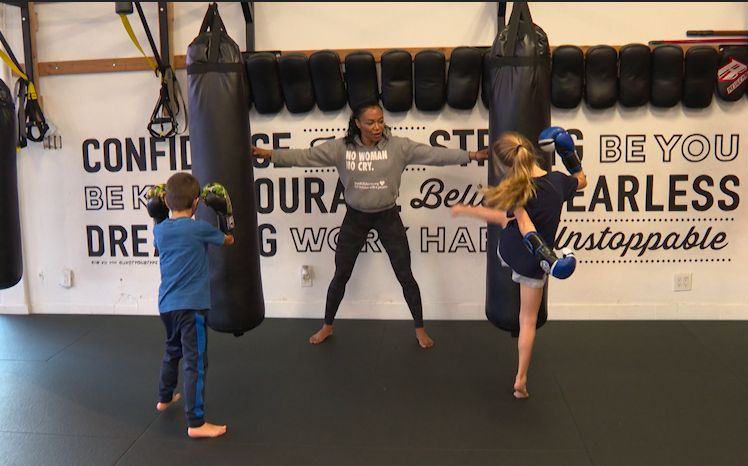 Team Bully Buster Teaches Kids How to Take Down Bullies

Eight-year-old Ava Biermann might be small, but she packs a pretty mighty punch for her size, and today she's practicing her strength by imagining a punching bag is the boy who used to bully her.

"This boy in my school was going around trying to fight me. I would tell him to stop, but I had no clue what to do and I got really scared," Biermann said.

Biermann has been taking self defense classes for a few months at Team Bully Buster on Riverside Boulevard in Studio City, where founder Keta Meggett teaches kids anti-bullying strategies and how to defend themselves if needed.

"If that boy came up to me today I would know how to fight, and I know how to make sure that he will not be able to hurt me or my friends," Biermann said.

Empowering kids is very personal to Meggett, who was bullied and beat up herself when she was younger.

"I created team Bully Buster because there was a void. There wasn't a place where children could come learn how to protect themselves, defend themselves stand up for themselves. I wanted there to be an empowerment place so I made it happen," Meggett said.

Meggett was in high school when she was verbally and physically assaulted by a group of girls who targeted her because of her biracial identity, and she is not alone.

Meggett and her boyfriend Coach Rod are doing an exercise where they throw cards towards one of the kids who tries to duck and dodge them. At first it looks like a torture game until Meggett explained that the purpose of the exercise is to teach the students how to move when something - or someone - is coming at them.

"When I got bullied and the girls came in to beat me up, I didn't move. I froze. That's why we do all these drills so they can be prepared and have way better skills than me," Meggett said.

Now an Mixed Martial Arts professional wrestler, a WOW TV superhero, actress, and founder of a non-profit anti-bullying organization, Meggett has dedicated her life to empowering and instilling confidence in kids.

She walks down a hallway with framed pictures of her wrestling and boxing highlights and points to one of her favorites.

"I had this moment right here was winning my first fight and getting my hands raised in victory, and there's no better feeling than that in the entire world," Meggett said.