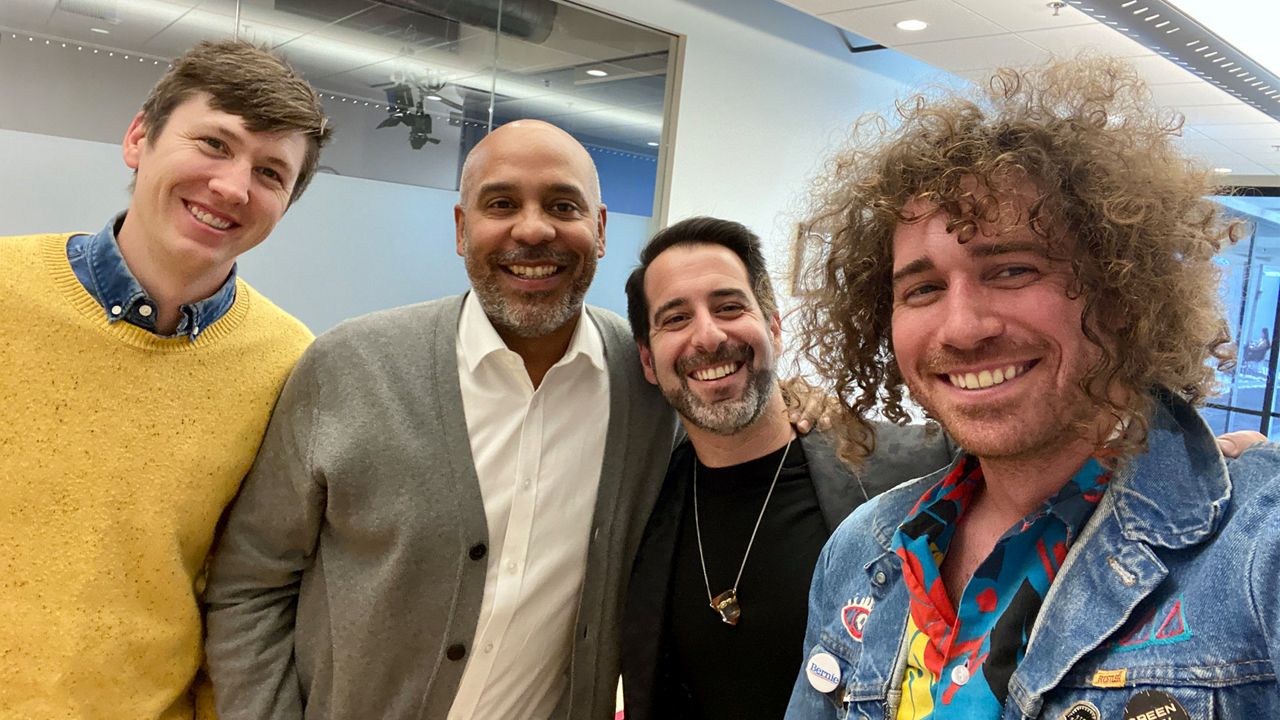 LOS ANGELES  – Turning to art to express how you feel is normal for independent musician Ari Herstand. When the coronavirus forced music venues to close, he gathered some musician friends -- six-feet apart and wearing masks -- to play "The Space Between" by the Dave Matthews Band in an effort to make sense of this new term "social distance".

"The idea was even though we have to be physically apart from one another, we can come together emotionally for a common good," said Herstand.

Coming together for a common good is something Herstand has become familiar with, well before COVID-19 changed the world as we knew it.

As a musician, he learned back in November that a piece of legislation that California had passed would actually change the music world.

It was the bill known as AB5.

"This could single-handedly crash the California music economy as we know it, this is just not feasible for how we operate our business," Herstand said.

The way AB5 was written reclassifies musicians from independent contractors to employees. For a singer/songwriter like Herstand, if he were to hire a musician for the day to play a gig or a recording session he'd become their employer.

"I would have to incorporate, I'd have to get worker's comp insurance, unemployment insurance, set up a payroll company," said Herstand. "It's like it would cost thousands of dollars just to comply with AB5 and it just wasn't realistic."

So Herstand sprung into action, first writing an article on his blog "Ari's Take" that went viral.

FINALLY!!!! WE DID IT!!!!! Well ladies and gentlemen, seven months after Governor Newsom signed into law the “gig worker” bill #AB5, which sent the California music industry into a complete panic, we finally have some relief. Today, the music industry, along with Assemblywoman Lorena Gonzalez and Assembly Majority Leader Ian Calderon agreed upon language for the “clean up bill” AB 1850 - that essentially exempts the vast majority of music professionals from AB5. We did it! What does this mean and what’s next? Well, first off, I’ve been a part of every step of this insane process since December and have been in the trenches working this thing out with all invested parties - and someday I’ll tell the full story of what went down. But for now, what you need to know, is that this language has been agreed upon by a shit ton of organizations: Recording Industry Association of America® (RIAA), American Association of Independent Music (A2IM), Music Artists Coalition (MAC), Independent Music Professionals United (IMPU), Songwriters of North America (SONA), American Federation of Musicians (AFM), the Recording Academy®, International Allegiance of Theatrical Stage Employees (IATSE), Screen Actors Guild (SAG-AFTRA) and Teamsters. And let me tell you, this was no easy feat. Many sleepless nights getting in Twitter battles with California politicians, countless phone calls with attorneys, redline after redline after edit after …how does “track changes” work again?… and trips to various important peoples offices. The newly formed organization, IMPU, that I lead and helped found with Adrianne Duncan, @elmolovano , @danicapinner_cello @nickcampbelldestroys @katisse @ned_menoyo @garritykaren and Alicia Spillias, gave speeches at events and interviews on news programs, took countless meetings with legislators, and put on performances at protest events. And created a petition that received over 185,000 signatures. All of this helped get us to today.... More on Ari’s Take (link in bio)

And he started a petition, gathering 185,000 signatures from the music community saying they are not in support of how AB5 affects them.

"We then got invited to the negotiations where the language was being discussed and worked on for the cleanup bill, AB 1850," said Herstand.

At the negotiating table with him, were Assemblywoman Lorena Gonzalez the author of AB5, Senate Majority leader Robert Hertzberg, the music union, and various organizations in the music industry.

The assemblywoman was open to an amendment, but all concerned parties had to agree.

After four months of negotiations, they hashed out the final language and struck a compromise.

"As a songwriter and a book author, I never thought one of the most impactful things that I'd have a hand in writing would be a law for the state of California, but I guess that's how it goes sometimes," Herstand said.

The legislature will vote on AB 1850 once they're back in session. Herstand is hoping it will pass as an urgency measure, going into effect the moment it is signed by Governor Gavin Newsom.

As surreal as it is for Herstand to have become the voice for independent artists, he's grateful that he could.

"I feel that at times it's kind of my responsibility and duty that if I'm in a position to help that I should help and that I need to step up and do that," Herstand said.

His efforts could potentially save his industry from detrimental changes, returning things to what they used to be, at a time in our lives when everything else is anything but that.