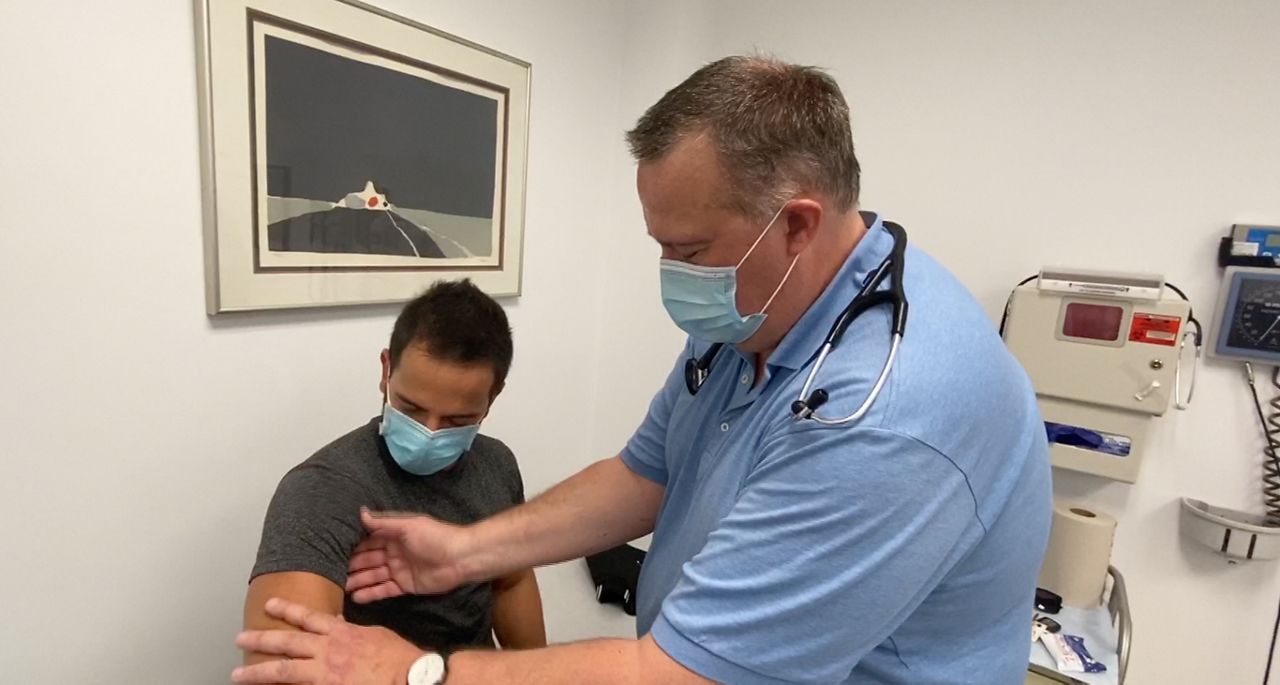 LOS ANGELES — A few weeks after getting his booster shot for the COVID-19 Moderna vaccine trial, Alberto Velazquez returned to UCLA’s Vine Street Clinic for a checkup.

That morning, Velazquez received news alerts that the experimental vaccine he volunteered to take was 94.5% effective at preventing illness from the virus, according to an analysis of its national clinical study.

“I can see the light at the end of the tunnel now. I’m feeling kind of invincible,” Velazquez said.

Velazquez is one of 194 participants in the Vine Street Clinic’s trial of Moderna, Inc.’s vaccine. So far no one in the group has tested positive for the virus, according to the clinic’s medical director, Dr. Jesse Clark.

It’s a small subset of the national clinical trial, which is made up of 30,000 volunteers. Moderna announced Monday that 95 participants in the study contracted COVID-19, and only five of the positive cases were in the vaccinated group. The other 90 people had received the placebo.

Velazquez is hopeful about these initial results and said that taking part in the study has transformed his outlook on life after the pandemic. As a travel agent, Velazquez lost his job when COVID-19 grounded his industry, and he fell into depression.

“I had to take antidepressants. Isolation is not good. That’s another reason to be happy about the end of the pandemic when everyone gets a vaccine,” Velazquez said.

Dr. Clark conducts most of the checkups at the clinic and is overseeing the vaccine trial. He said the location normally does research in HIV prevention and substance abuse, but quickly pivoted in August to the vaccine trial, with all hands on deck.

The vaccine is administered in two shots, 28 days apart, according to Dr. Clark, who added that the science behind the vaccine was groundbreaking.

“Commonly-produced vaccines contain either an attenuated or weakened form of the virus or some portion of the virus. This doesn’t contain the virus at all, so what we tell people is that there is no risk they can actually get COVID-19 infection from this vaccine. It’s an entirely new technology using ‘messenger RNA’ or MRNA, which basically uses the body’s genetic code to produce antibodies against the virus,” Dr. Clark said.

The clinic said the majority of volunteers experienced only mild side effects, including muscle aches, night sweats and low-grade fevers.

As an infectious disease doctor, Dr. Clark has treated patients with COVID-19 and shared his excitement for the initial results of the vaccine trial.

“Having seen both sides, I would be one of the first people in line to get this vaccine when it’s available,” Dr. Clark said. “Because it’s so effective and it’s so much better than actually getting sick and potentially dying from COVID-19.”

Some of the hardest-hit patients have been from communities of color, which is why the Vine Street Clinic said it prioritized outreach to them. That effort was led by community program manager Christopher Blades, who had a family member get sick and recover from the virus.

A Facebook ad is how Velazquez said he caught wind of the Moderna trial.

“As a Latino, I really wanted to give diversity to the COVID study because I know many in my community, they [don’t] want to participate in the clinical trial because they feel like they are being used like guinea pigs,” he said. “But I trust science.”

Seeing the preliminary success of the Moderna vaccine makes Velazquez feel that being part of the trial was a shot worth taking. And he hopes the science he trusts in will help us round the corner in the fight against COVID-19 as soon as possible.