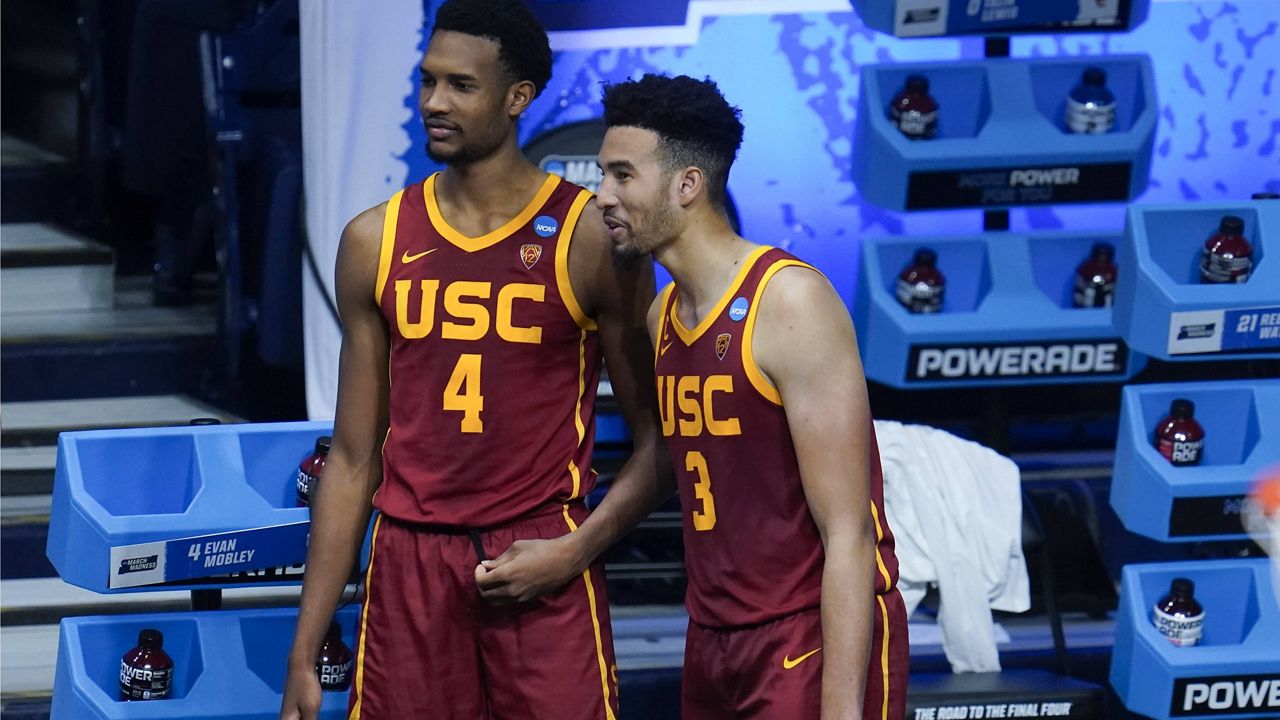 USC forward Evan Mobley (4) and USC forward Isaiah Mobley (3) watch from the bench during the second half of a men's college basketball game against Kansas in the second round of the NCAA tournament at Hinkle Fieldhouse in Indianapolis, Monday, March 22, 2021. (AP Photo/Paul Sancya)

LOS ANGELES — Thursday afternoons are typically quiet for the Udo-Ema household, but for Etop Udo-Ema, the founder of the travel ball team Compton Magic, this past Thursday represented the start to a whole bunch of madness.


He will be amongst those lucky enough to take in the NCAA tournament as it heads into the Sweet Sixteen on Saturday, and Udo-Ema will not just be cheering on one former player. He boasts eight Compton Magic alumni still in the Big Dance.

"For COVID reasons, I was not going to travel, but thinking about it, I was going to be there COVID or not," he said. "I'm not missing this; I don't miss any moments for the kids."

Udo-Ema has known them and coached them for over a decade.

"They played in our camp as little kids, so my first memory of them is walking in the gym," he explained.

From there, he has seen them blossom into two of the NCAA Tournament's top players — leading the Trojans to their first Sweet Sixteen appearance since 2007, and to one of the most dominating performances of the tournament thus far.

In round 32, Isaiah exploded to the tune of four three-pointers and a team-high of 17 points, while Evan — likely one of this year's top draft picks — added on a double-double of his own.

Through it all, Udo-Ema has watched and cheered them on every step of the way.

"We go crazy, like especially at the house," he said. "We are going bananas, screaming at the screen, talking to them, coaching them, and going nuts. It's just a culmination of all this hard work coming to fruition."

Because he has been with them through every big moment thus far, there was no chance Udo-Ema was going to miss seeing them compete on college basketball's biggest stage live and in person.

To him, the Mobley brothers are more than just former players. They are family.

"I'm like the other proud parent," he said. "It's a village to raise kids, and I'm like the surrogate parent losing my mind. We are just friends beyond basketball. They deserve everything that's happening for them, and I hope their journey takes them to places they can't imagine yet."