LOS ANGELES (CNS) — Most Southland beaches are open Sunday after a tsunami advisory, prompted by an underwater volcanic eruption in the South Pacific, left much of the coastal shoreline closed Saturday.

"No further tsunami danger exists, however some areas may continue to experience small sea level changes," the National Weather Service said in an advisory issued early Sunday. "As local conditions can cause a wide variation in tsunami wave action, the all clear determinations must be made by local authorities."


Beaches, harbors and marinas were closed in Los Angeles, Orange and San Diego counties early Saturday after the NWS warned of potential flooding and strong currents that could be hazardous to swimmers, boaters. and nearby structures.

People were advised to avoid the Southern California coastline, but no evacuation orders were issued. Similar warnings were also issued for Alaska, Hawaii and the entire West Coast, although all have now been canceled.

The concern was prompted by an undersea volcano that erupted near the South Pacific nation of Tonga late Friday, local time, and caused extensive flooding in its capital city. 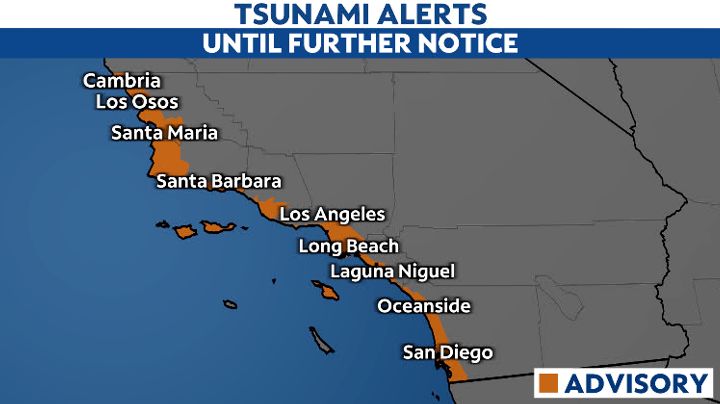 "Seeing some surges on the Port San Luis tsunami gauge. Reporting up to a 24 cm residual so far. That's 9.4 inches or about 19 inches from the bottom and top of the residual," the NWS Los Angeles office tweeted Saturday morning, but said there were "no significant concerns about inundation."

Some surfers and other beachgoers still showed up at local beaches, but most stayed away and no damage or injuries were reported.

Seismologist Lucy Jones, founder of the Dr. Lucy Jones Center for Science and Society, said the expected short-term increase of 1-3 feet in sea level would only be an issue near the beach.

"Tsunamis are not one wave," Jones tweeted Saturday. "It's more like sloshing and that sloshing can continue for a day. Just because the first wave has passed, it is not time to go see the beach. Much tsunami damage happens in ports because of the currents. Moving water has huge momentum."