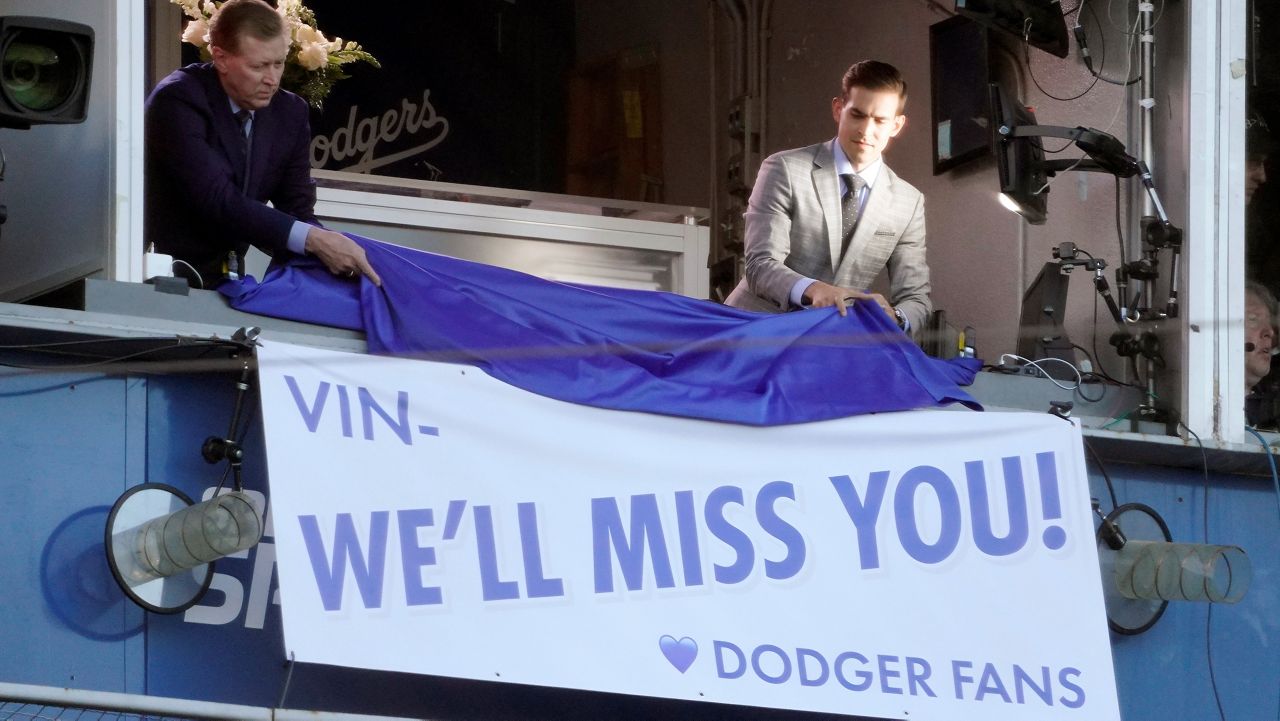 Broadcasters Orel Hershiser, left, and Joe Davis unveil a banner during a ceremony to honor the memory of Los Angeles Dodgers announcer Vin Scully prior to a baseball game between the Dodgers and the San Diego Padres Friday, Aug. 5, 2022, in Los Angeles. (AP Photo/Mark J. Terrill)

EDITOR'S NOTE: Multimedia journalist Jo Kwon spoke with Mark Langill, the Dodgers team historian, ahead of the pre-game ceremony to honor Vin Scully. Click the arrow above to watch the video.

Behind a beautiful blue sky, there was a moment of silence at Dodger Stadium on Friday for the lovable Scully, followed by a video narrated by Dodgers broadcaster Charley Steiner and accompanied by Israel “IZ” Kamakawiwo’ole's memorable version of “Somewhere Over the Rainbow.”

Scully once described a beautiful night as “a cotton candy sky with a canopy of blue.” He was the soundtrack of baseball games for generations of Dodgers fans and a masterful storyteller.

Roberts said Scully wouldn’t have liked all the attention.

“Vin, as he’s looking down on us right now, well, he hated the spotlight on him,” Roberts said. “Well, this is going to be a very uncomfortable moment right now but he deserves it. Vin was a man of character and integrity and class, a true gentleman. He wasn’t just a Dodger. He loved the game of baseball that we all love and care about.”

Dodgers and San Diego Padres players stood along the first- and third-base lines during the ceremony.

When Scully called his last game at Dodger Stadium in 2016, he had a banner that hung from his booth that read: “I’ll miss you.”

Scully told the crowd that he needed them far more than they needed him. His last visit to Dodger Stadium was on June 9, 2021.

Later during the ceremony, the Dodgers gathered at the mound for a photo with the broadcast booth in the background. There was a new banner, unveiled by broadcasters Joe Davis and former Dodger Orel Hershiser, that read, “Vin, we'll miss you.”

Fans gave a standing ovation when the video concluded with a picture of Scully waving from the field with a rainbow behind him.

The umpires gathered at home plate and looked up to the broadcast booth and tipped their caps in honor of Scully. Dodger starter Tony Gonsolin did the same from the mound.