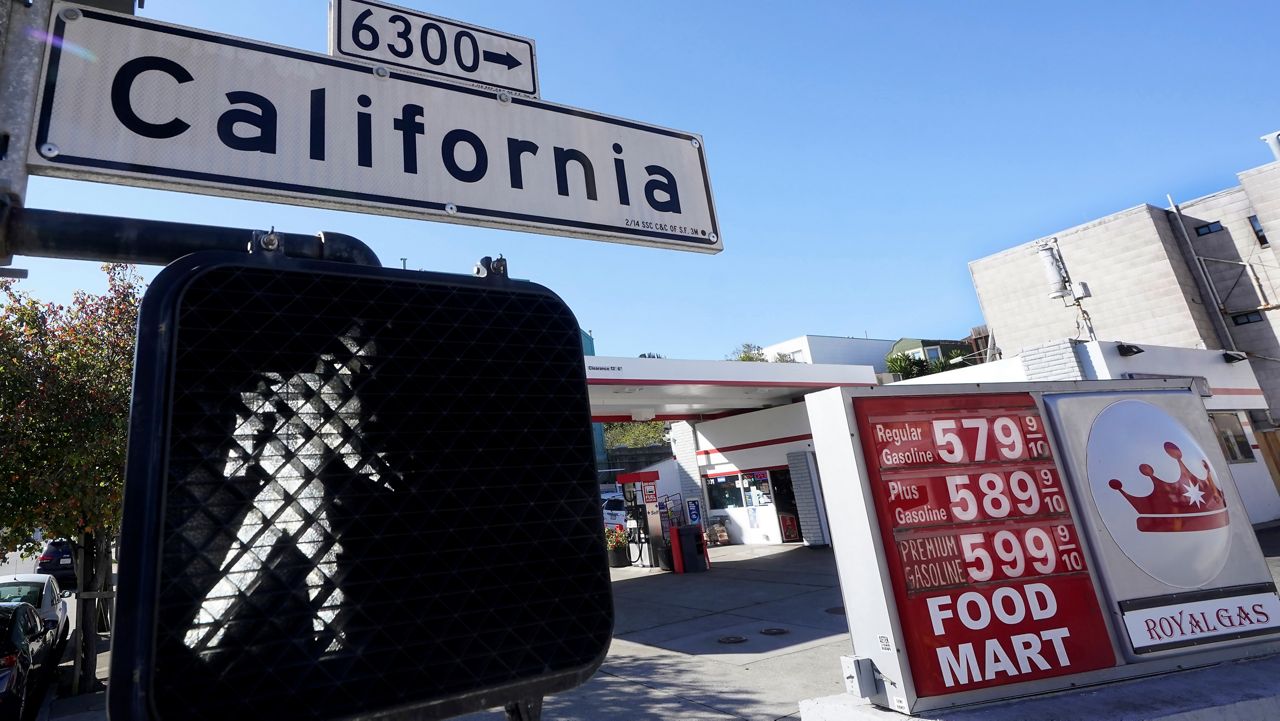 EDITOR'S NOTE: Multimedia journalist Catalina Villegas spoke with a UCLA professor about rising gas prices and public transportation. Click the arrow above to watch the video.

The Democratic governor also called on state lawmakers to pass a new tax on oil company profits and return the money to California taxpayers. Lawmakers don't return to the Capitol until January, Newsom's office provided few details on the proposal.

“They're ripping you off," he said of the oil industry in a video posted to Twitter.

Oil industry representatives said it is state regulations that cause higher prices in California than the rest of the country. The summer blend of gasoline that refineries are required by law to produce in the hotter months costs more money to make but is designed to limit pollutants like smog. Most refineries can't switch to the winter blend until November.

Switching from the summer to winter blend would likely save consumers 15 to 20 cents per gallon, said Doug Shupe, a spokesman for the Southern California Automobile Club, an affiliate of AAA. Gas prices in Los Angeles are close to breaking a record of $6.46 set in June, he said.

“If these prices go up to $7 a gallon, a 15-cent drop is not really going to mean much to drivers,” Shupe said.

Prices are spiking in part due to limited supply because some oil refineries are offline due to routine maintenance or other problems, he said. The California Air Resources Board, which regulates refineries, said high prices could also be due to part to a refinery fire and Hurricane Ian.

It's the latest spat between Newsom and the oil industry, which holds political and economic sway in California despite the state's aggressive climate policies. But Newsom's dual actions Friday also illustrate the complicated reality Newsom faces as he tries to wean the state off oil and gas while responding to economic reality.

Earlier this year, for example, Newsom's administration turned to generators and power plants that run on fossil fuels to help avoid rolling power blackouts during a heat wave.

By urging air regulators to let oil companies switch to a winter blend earlier, Newsom is acknowledging that state rules play a role in prices, said Kara Greene, a spokeswoman for the Western States Petroleum Association.

Refineries typically perform maintenance in the spring or fall as they prepare to switch fuel blends, she said. It will take time for refineries to prepare the winter blend, and Newsom’s order may have little immediate effect, she said. If Newsom truly wanted to lower prices, he could suspend the state's gas tax or relax other regulations, she said.

“It’s a conscious decision to try and put the responsibility back on the oil industry," she said.

Newsom said he expected the relaxation of refinery rules to increase supplies by 5% to 10% because refiners have already started to produce and store the gas.

“Any impacts on air quality caused by this action are expected to be minimal and outweighed by the public interest in temporarily relaxing" the limits, the air board said in a statement.

Starting in January, oil companies will be required to disclose their monthly profits to the state under legislation Newsom recently signed. Consumer Watchdog called on Newsom earlier this week to call a special legislative session to approve a tax on those profits.

Jamie Court, the group's president, said he applauded Newsom's efforts to deal with “an industry that's out of control."

Major oil companies saw record profits this summer, and the price of crude oil has dropped since the end of the summer.

The California Energy Commission on Friday wrote a letter to executives of five major oil companies asking why prices rose so dramatically, what actions the state could take to lower prices and why refinery inventory levels have dropped.

Greene, of the petroleum association, said California regulations raise the price of oil by just under $1 in California, but other observers say its lower. Court, of Consumer Watchdog, says its around 60 cents, while Severin Borenstein, an energy economist with the University of California, Berkeley, says its closer to 70 cents.

Borenstein has also identified an unexplained surcharge that he says has cost Californians billions of dollars since 2015.

Newsom in 2019 directed the state attorney general to look into whether oil companies were overcharging Californians. Attorney General Rob Bonta has said his office is still investigating.