At the moment, Kalani Pe‘a is on his way to pick up cookies from The Maui Cookie Lady to give as gifts when he gets to Las Vegas. Glee fills his voice as he recounts what he’s doing.

“I love gift-giving and I can’t wait to gift friends and family at the Grammy Awards and nominees and people I have built relationships with,” the Grammy-nominee said.

The Hawaii Island native, who now lives on Maui, was prepping for his third trip to the Grammys as he spoke with Spectrum News Hawaii on Tuesday. Pe‘a, 38, was nominated in the Best Regional Roots Music Album category for his album “Kau Ka Pe‘a.” He’s been nominated  — and won — twice before. (Update: Pe‘a won his third Grammy Award Sunday during the nontelevised part of the ceremony.)

Despite his many wins, he doesn’t take any of it for granted.

“It’s very exciting, very overwhelming because a lot of amount of expectations, but a lot of hope and faith that the mission we put Hawaiian music on the map,” he said.

He performed at the Grammys Premiere Ceremony, which streamed on YouTube at Recording Academy/Grammys and on live.grammy.com.

Pe‘a worked on his nominated album during the pandemic. ”The album is called Kau Ka Pe‘a, my last name means ‘the sailboat’ …” he explained. The album’s theme is that of voyaging the world. It features seven original songs that honor ali‘i, including King Kalakaua and King Kamehameha, as well as covers of songs such as “When I Fall in Love,” a duet with Amy Hanaiali‘i. He points to the title track, Kau Ka Pe‘a, as a favorite. Other Hawaiian musicians — Pandanus Club, Kimié Miner and Kalenakū — are featured on that song. 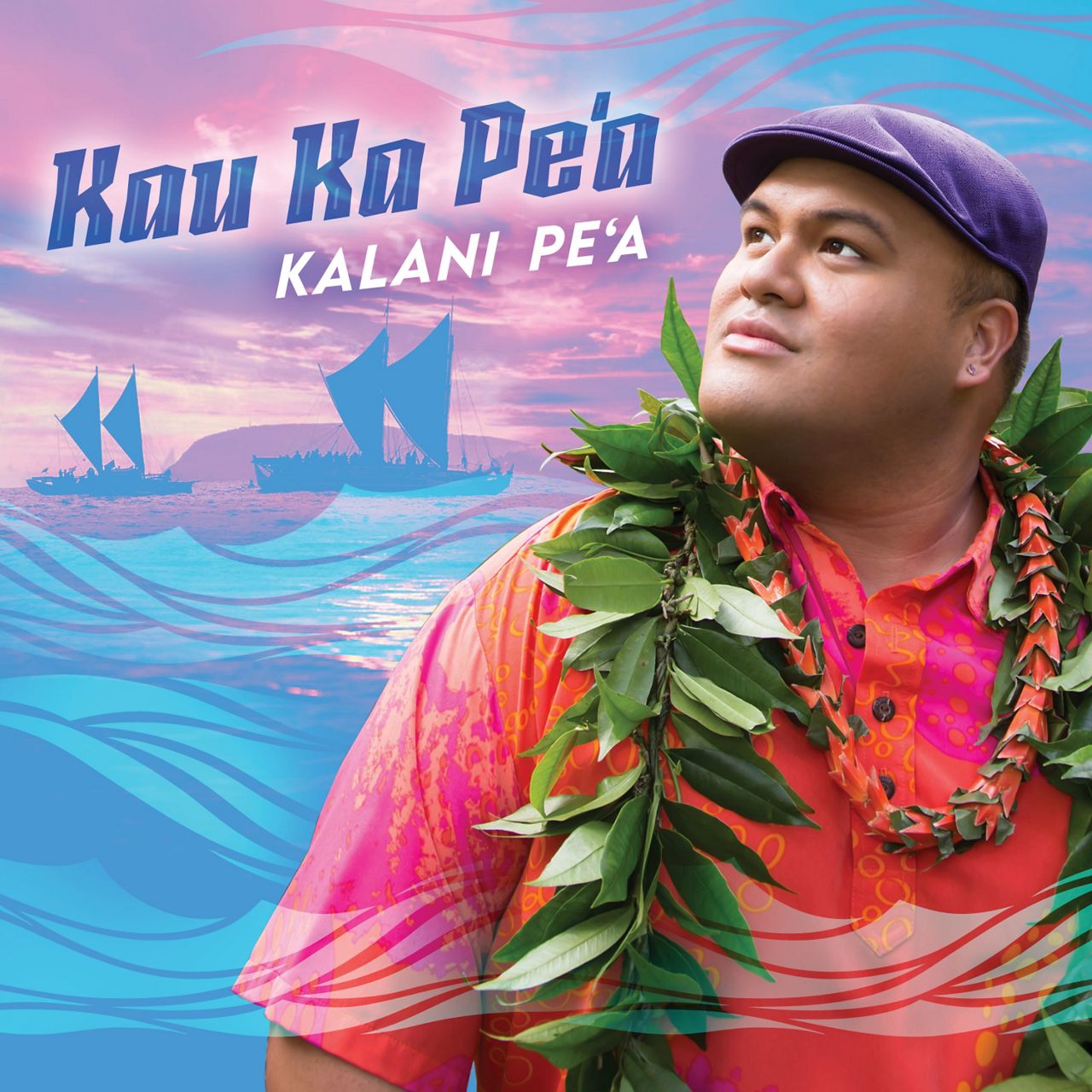 "Kau Ka Pe‘a" is Kalani Pe‘a's third album. It is nominated for a Grammy in the Best Regional Roots Music Album category.

This next trip to the Grammys, held in Las Vegas on Sunday, is just the latest in a long and eventful journey Pe‘a has been on throughout his life. It’s a journey that’s guided by his desire to share the Hawaiian language and culture with the world. And, like any worthy voyager, Pe‘a has a strong and supportive crew around him. His mother, Pua Leonard, had him start singing at age four, to help him with a speech impediment.

Pe‘a, who is fluent in Hawaiian, attended Ke Kula o Nawaihiokalaniopuu, a Hawaiian language immersion school. He sang throughout his childhood, and he even wrote in his high school yearbook that he would win a Grammy. He’s now done that twice over, with hopes of a third win.

“I do truly believe dreams do come true. But you have to work for it. … I believe in hard work. I believe eight hours a day is not enough. And I believe in productivity and love in your work and I’m just so grateful to surround myself with loving people. I just love it. I love music, I love life. Music saved my life. Music is life.”

After high school, Pe‘a attended Colorado Mesa University. While there, he was involved in stage productions and choirs. Pe‘a won the National Association of Teachers of Singing Competition for the Colorado/Wyoming chapter in 2001. After college, he worked for Kamehameha Schools. In 2018, he left that job to focus on music full-time.

By that point, he’d already earned his first Grammy, in the Best Regional Roots Music Album category, with his debut album, “E Walea,” in 2017. The album also earned the Na Hoku Hanohano Award (Hawaii’s equivalent to the Grammy) for Contemporary Album of the Year. He is the first artist to ever win both the Grammy and the Hoku with the same album. He won the Grammy for Best Regional Roots Music Album again in 2019 with his sophomore effort, “No ‘Ane‘i.”

Pe‘a admitted to a mixture of feelings with this third turn at the award.

“Nervous? — to be nominated? Yes. It’s one accolade. But, the accolades, whether I’m a two-time Grammy Award winner or a Hoku, multi vocal winner, they are accolades that will light up my career and allow me to dive into many opportunities, whether it’s scheduling world tours, collaborate with other artists, producers and engineers. But the accolades do not define my success. I am Hawaiian … I’m that Hawaiian boy from the Pana‘ewa homestead, and I am rooted and grounded because my family.”

We are opening the show! Watch live around the world 12:30 pt at https://t.co/MIzjqA5KSE - @recordingacademy #GRAMMYs https://t.co/JUIyWf2eRm pic.twitter.com/1LYFQW2LuH

Along with those nerves is a conviction to share his music and culture with everyone.

“And that’s what matters is, is that people come to Hawaii to feel to be part of the heart of the world. We are in the heart of the Pacific and you want to see aloha and embrace aloha. So, to put Hawaii music on a global map is part of my kuleana my duty, and I’m so proud to represent my ohana and the communities I serve.”

His mission will also be reflected in what he wears to the Grammys. In 2019, he shone brightly on the red carpet thanks to his purple sequin jacket. This year, “Project Runway” designer Kini Zamora designed a special ensemble for him.

“He worked really hard on my jacket. There’s kaona — meaning like hidden message, and point — behind the art because it pertains to my album,” Pe‘a explained, adding that Maui Divers Jewelry has also collaborated with custom pieces for the occasion.

Excited to share my first look at this years #GRAMMYs look! Huge mahalo to @mauidiversjewelry @designerkini and @ellysformalwear for your hard work bringing this idea to life! Tune in live Sunday 12:30pm PT at https://t.co/MIzjqA5KSE - @recordingacademy https://t.co/JehfkteSbC pic.twitter.com/AJrCDBXHsL

“And it’s not a costume. It’s regalia. It is just like what Tiffany Haddish will say,” he added with a laugh.

These collaborations — the featured artists, designers and others — are all an integral to how Pe‘a continues on his journey. It’s not about business. It’s how he was raised.

Another important part of his crew is his husband and manager, Allan B. Cool.

“Thank God I have him in my life. He keeps me grounded … he motivates me,” Pe‘a said.

What’s next on the horizon for Pe‘a after the Grammys? Well first, it’s his May Day Concert at Hawaii Theatre on May 1.

“There’s so many goals. I have so many ideas. I’m also grant writer, and I really want to create Hawaiian language and music workshops with project based learning for grades six to 12. I was a former teacher of Kamehameha Schools for 10 years; I’m all about education. I'd like to do vocal master classes.

“I have so many long-term and short-term goals. I just have to prioritize myself so I can do [it all].”

With his clear vision, a supportive crew and the wind in his sails, his fans say there's little doubt that Pe‘a can accomplish just that.

EDITOR'S NOTE: The original story was updated to reflect his third Grammy win on Sunday. (April 3, 2022)