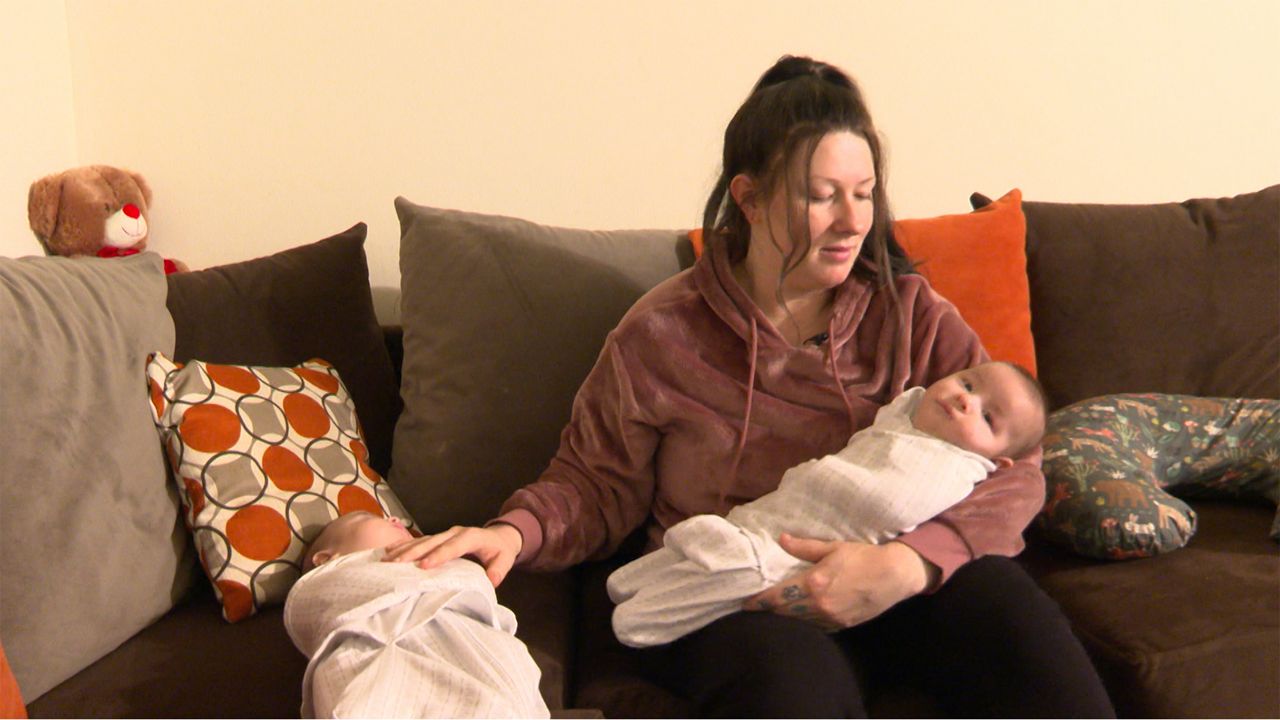 SANTA ANA, Calif. — This Christmas, Alyssa Rodriguez won't be alone, but she'll be single-parenting her 3-month-old twin boys as her husband, Raul Rodriguez, is stuck in Mexico.

"We're just not going to be together as a family or know what that's going to look like," said Rodriguez, a mother from Santa Ana.

The Consulate denied her husband's case after he went to Ciudad Juarez, Mexico, for an appointment. It ended up barring him from re-entering the United States for the next 10 years.

Rodriguez was brought to the U.S. by his mother when he was 2-years-old and then again at 11-years-old. He graduated from a high school in Santa Ana, attended college courses on and off, kept a clean record and maintained his full-time job as a washer and dryer mechanic, which are all conditions of the Deferred Action for Childhood Arrivals, or DACA, policy.

The legislation allows for children who were once brought to the United States illegally by their legal guardians without their consent to attend school and work without fear of deportation.

As Rodriguez grew up, he realized he wanted to fix his status as a DACA recipient, so he spent around $10,000 in five years on legal and immigration fees in hopes of earning legal permanent residency. Rodriguez wants to enlist in the U.S. Marines or Army.

“He’s always been proud to be in this country. He just wanted to be part of the service,” said Rodriguez’s wife.

A week after their twin baby boys were born, Rodriguez received a letter notifying him that his appointment with the Consulate was finally scheduled, so in good faith, Rodriguez went to Mexico.

The couple believed since he continued to renew his DACA status, kept a clean record and maintained a full-time job, he would only stay for about a week to complete his interview. Instead, Rodriguez was notified that his case was denied and he would be barred from re-entering the United States for 10 years.

The three- and ten-year bars were created as part of the Illegal Immigration Reform and Immigrant Responsibility Act (IIRAIRA) of 1996. Incorporated into section 212(a)(9)(B) of the Immigration and Nationality Act (INA), the statute imposes re-entry bars on immigrants who accrue "unlawful presence" in the United States, leave the country, and want to re-enter lawfully.

"Unlawful presence" is a term of art that is not defined in the statute or regulations.

"The first thing I thought about was my wife and kids, my twin boys. I was very worried about how they're going to do it out there in [the] States without me because I was the one providing for them," Raul Rodriguez said.

Determined not to become one of the many people sleeping by the border and Consulate, Rodriguez found a job where he used his English language skills at a call center where he makes $150 per week and found a motel room that charges $15 per night.

Running the OC Justice Fund is Sabrina Rivera, an attorney who is not representing Raul Rodriguez but does work with undocumented immigrants facing similar cases of deportation and detention.

"Our government passed a law in 1996 that created the 10 year bar," said Rivera, who is executive director of OC Justice Fund.

Rivera said DACA was written to let people stay and work in the country but doesn't guarantee them a pathway to citizenship.

"They're pinned against this decision whether or not they want to move forward, risk family separation and deportation or stay in the position that they are which is undocumented in this country," Rivera said.

Back in the family's one-bedroom apartment in Santa Ana, Alyssa Rodriguez is caring for their twin baby boys alone while trying to raise money for another attorney to bring her husband home.

She is trying to raise money on GoFundMe to afford a new attorney so she can help her husband appeal his case. As a last resort, to raise money to afford to relocate her family to a new country, whether it be Mexico, Canada or somewhere else.

The couple wants to be in a country together, where they'll be accepted, and their sons will have opportunities for a good education.

Congressman Lou Correa's office drafted a letter of support for the family to include it in their appeal application. The Rodriguez family hopes their local politicians and leaders will help them bring attention to their case.

To help Raul Rodriguez and his family, visit his GoFundMe.