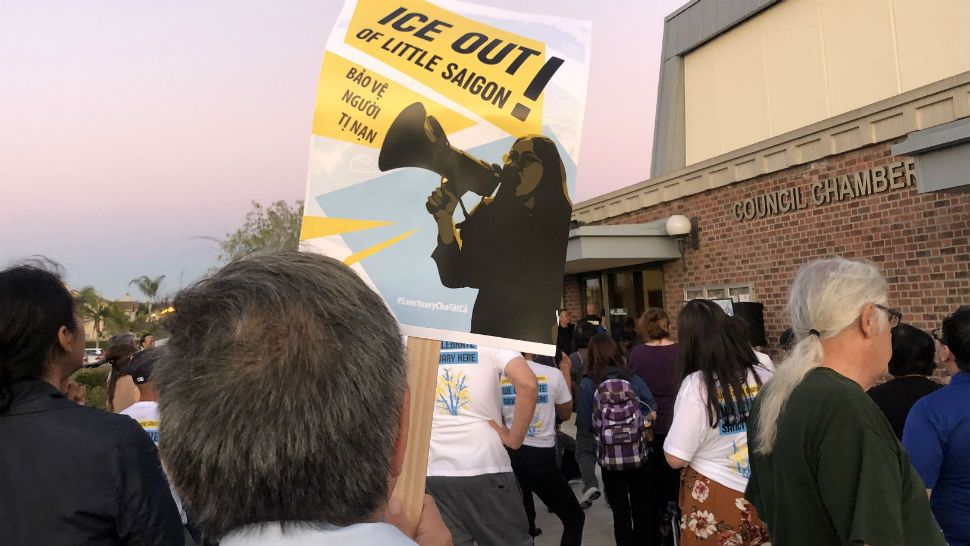 WESTMINSTER, Calif. — It is not easy to speak up for what you believe in, but Tracy La is willing to do whatever it takes, even if it means confronting powerful people in Orange County.

“This is our lives. Our lives are on the line for something like this. We want our council members to be able to support what the community has been asking for,” said La, executive director of VietRISE.

La and her peers founded the community youth group called VietRISE in February 2018. Their mission is to strengthen and support civic engagement and organize efforts within the Vietnamese community in Orange County. They hope to advance the growing movement for racial, economic, gender, environmental, and social justice.

The group consists of many members, who have parents and grandparents who escaped communist Vietnam and found sanctuary in Orange County as refugees. Many of them live in Westminster where more than half of the population are either Asian or Hispanic and about 11,000 residents are undocumented immigrants.

Despite the city’s demographic makeup, the city council voted to side with President Trump’s administration as it challenges California’s Sanctuary State Law, which prohibits state and local police agencies from using their resources to enforce federal immigration law.

“We wanted to remind our elected officials that we are refugees. We came here not that long ago and there were people who extended their hand to us. There are also people in our community who made sure that we all thrive together,” said La.

VietRISE along with a coalition with other community groups came together to call out Westminster City Mayor Tri Ta and Orange County Supervisor Andrew Do for voting against the sanctuary law. Mayor Ta and Supervisor Do are both Vietnamese American immigrants.

Spectrum News 1 reached out to both leaders who chose not to speak on camera, but released statements instead.

“I don’t respond to baseless accusations and people using my office to promote their name and agenda,” said Orange County Supervisor Andrew Do.

“My mission as Mayor is to continue to move our City forward. There is too much important work that needs to get done to be caught up in manufactured political attacks that only distract from what we are trying to achieve as a City. Under my leadership, this City has been able to implement a number of new project and programs that are aimed at making life better for our citizens. I am not going to let this political grandstanding and gamesmanship stand in the way of my commitment to the people of Westminster to continue to improve our City,” said Mayor Tri Ta.

“The community is asking our elected officials to respond and explain why. We’re asking them to rescind their support for that lawsuit,” said La.

While they wait for the leaders’ responses, La and VietRISE members aren’t sitting idly by. They say they’re going to continue to fight for what they call “human rights” for immigrants and refugees who call Orange County home.