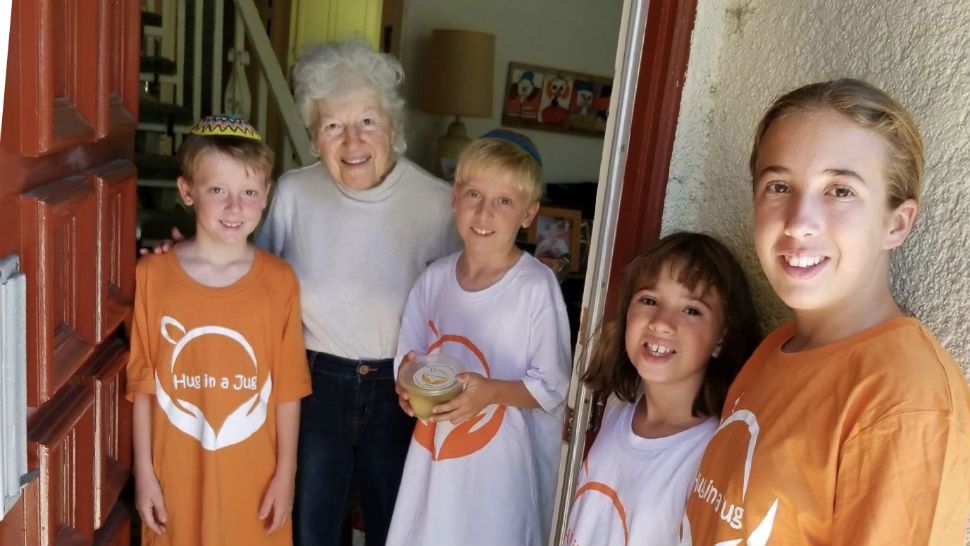 Volunteers Deliver "Hug in a Jug" to Home-Bound Holocaust Survivors

LAGUNA HILLS, Calif. — There are two days out of the week that Dora Kremnitzer Zipper looks forward to the most.

“I’m always anxious to see people especially from synagogue because everybody there are extremely nice,” said Zipper.

She is a 90-year-old grandmother living in Laguna Woods. She was born in Poland and survived the Holocaust.

“My father was a business person and we were very well off. We always had help in the house, but then Hitler came. He disrupted everything and threw us out from our home,” said Zipper.

She recalls becoming homeless and having little to no food. Her life is full of tragedies. At her age, Zipper has outlived two of her daughters. Now that she lives alone, Zipper says she is lonely and wishes she could spend more time with her family.

On her loneliest days, Zipper says she is excited to see people that she has met at the Jewish center. Rabbi Tzali Stillerman runs the Chabad located on 23665 Moulton Parkway in Laguna Hills. He and his wife created a project called “Hug in a Jug” a few years ago.

Rabbi Stillerman wanted to serve the needs of their growing senior community by delivering what Jewish people call the Jewish penicillin, which is matzo ball chicken soup.

“Chicken soup goes back to when the Jews were primarily in Poland and Russia. Whenever someone would get sick, people would prepare chicken soup and that would make them feel better,” said Rabbi Stillerman.

With that idea in mind, the couple wakes up early each week to make chicken soup for about 40 people. With help from volunteers, the soups are delivered to seniors, who are Holocaust survivors, recovering from surgeries or illnesses, homebound or just needs some company.

The Rabbi believes that this program has truly saved lives. He recalls a female senior who wasn’t responding to calls from him for about two days and when he came to her house to drop off her soup, she didn’t open the door.

“I realized something is strange. Her car is parked in her driveway. Her lights were off and shades were down, it’s strange for her to not reply to phone calls or doorbell. I called security, they rushed into her house and they found her unconscious. She was cold, she wasn’t breathing. They did CPR and revived her,” said Rabbi Stillerman.

He says that incident gave “Hug in a Jug” a whole new meaning. After the couple finishes making the soups, they fill the soups into plastic jugs that are picked up by volunteers like Susan Grosfeld.

“Hug in a Jug is just sharing love and maybe the soup is just an excuse to go visit someone,” said Grosfeld, who says she drops off soups to about 13 seniors every week.

Anyone who is interested in donating or volunteering for “Hug in a Jug” is encouraged to visit the website here.