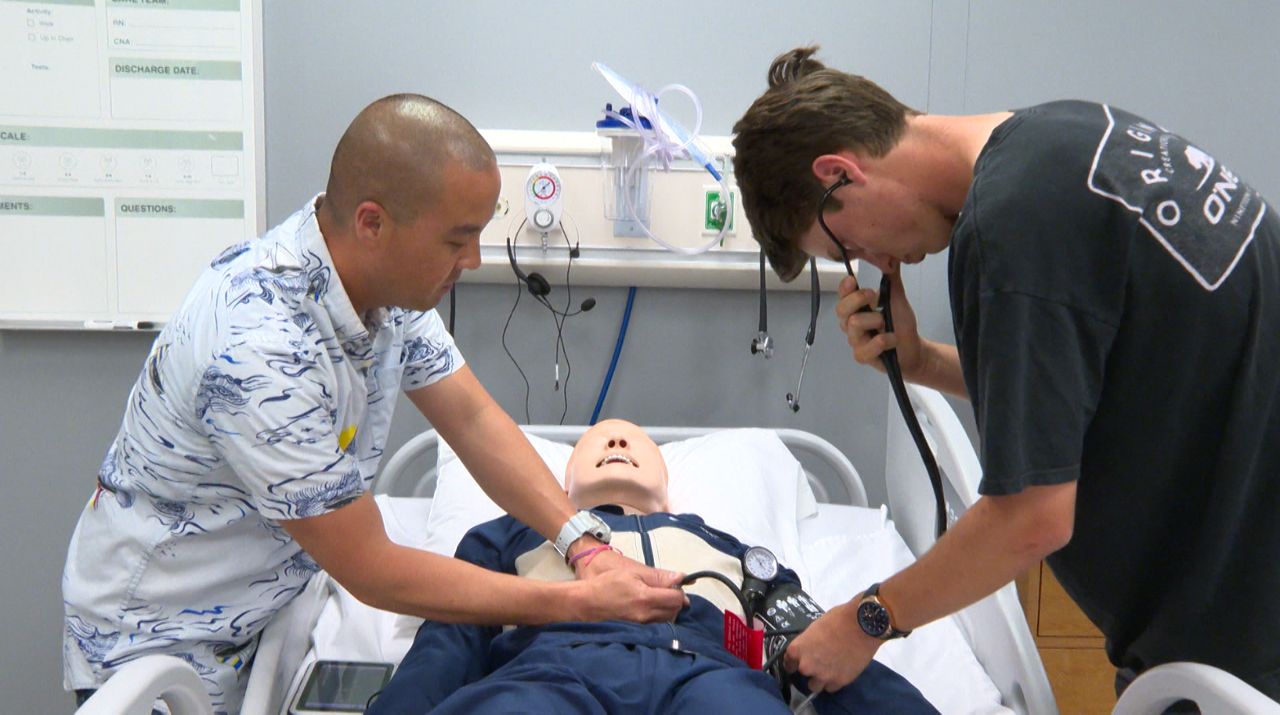 Saving lives can be a hectic situation, and for Estancia High School Junior Jake Covey, this manikin might help him save a life one day.

Jake, the son of a 20-year paramedic, always knew he wanted to pursue a career in the medical field, and the Patient Care Pathway Program is part of Estancia High School’s Medical Academy, which over multiple school years, teaches students real-life skills in the medical field.

“It’s definitely one of the classes I look forward to all day,” Jake said.

The manikin’s name is Nurse Kelly, and it highlights the program’s comprehensive technology and resources, allowing Jake and his teacher Hayato Yuuki, to mimic real-life emergencies that Yuuki can literally dial in on this tablet.

And his real-life knowledge and coaching is every bit as important as the technology here.

Yuuki himself isn’t just a teacher. He’s a real paramedic on the weekends.

“One of the most important things is there’s a big difference between book stuff and real life stuff. As an instructor, I have to teach book stuff. I have to say hey here are the do's, here are the don'ts, but in the field sometimes when you have a patient’s life in your hands, sometimes it’s like who cares about the dont’s, you just have to do it,” Yuuki said.

This program’s high success rate in placing students in medical occupations is welcome news for the healthcare industry, which from 2016 to 2026 will have added 2.4 million jobs, according to Bureau of Labor statistics.

Jana Murphy is one of those alumni who after graduating in 2016 became an EMT.

“So I got through that class. It was really hard, but I think that’s what gave me the confidence. Like hey I actually really like this, I’m OK at it, and I really have an interest in it,” Murphy said.

And while book smarts are important, this program proves that nothing can beat learning in the real world.

“In math you can’t deny it's valuable, but most of the time they’re talking, they’re dealing with imaginary numbers. And I don’t know when I’m ever going to use that. But every time I come in here, there’s some sort of situation that either Mr. Yuuki has personally experienced or that he can explain that can definitely happen that I can see that if that situation happens, I want to be ready just in case it occurs,” Jake said.