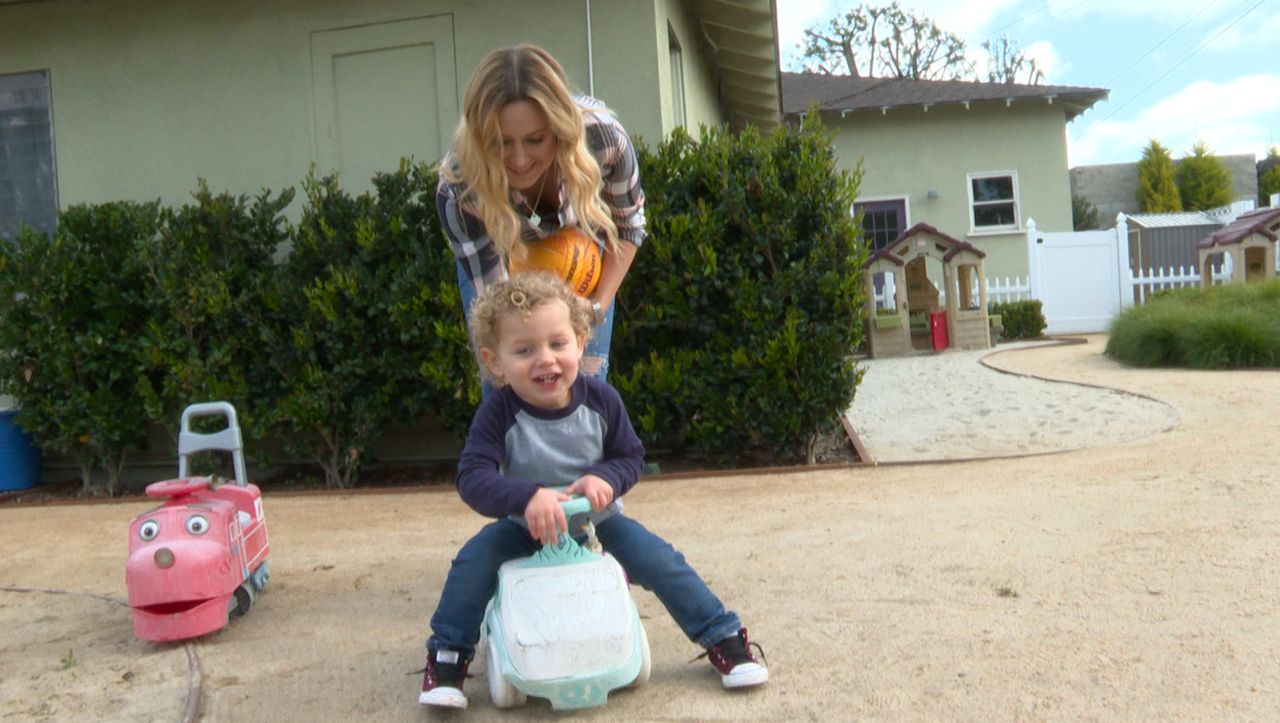 Brittany Demers and her son, Jackson, playing on the playground at New Directions for Women. (Spectrum News)

COSTA MESA, CA – Getting pregnant was Brittany Demers’ cue to get clean. Demers was 29-years-old at the time she asked a friend for help to get into New Directions for Women, an addiction treatment center, in Costa Mesa.

Demers says her story is an example of how addiction doesn’t discriminate. Demers grew up in Orange County and was the middle child of a couple who has been married for more than 40 years. She graduated from San Diego State University and was a competitive soccer player for more than 11 years.

She says at a young age, she felt the need to please others and be a perfectionist. However, the need to make others happy made her seek ways to make her feel better when she did fail.

“The pressure of perfectionism and fear of not being enough was overwhelming. I started self-medicating my depression with alcohol. Partying with friends turned into me drinking alone in my dorm, isolating myself. Thankfully my family noticed my behavior change and helped me find treatment. I went for 30 days and stayed sober for four years. But I didn’t work a program, and an eating disorder took hold as yet another way to self-medicate,” said Demers.

After she graduated from college, Demers went to seven different treatment centers in Orange County. She says she stayed sober for years, until she turned 27-years-old and tried heroin for the first time.

“It was like nothing I had ever experienced before, and it turned on an obsession. I could not stop. Over the next year and a half, I used every single day. I became homeless on Newport Boulevard, and overdosed eight times,” said Demers.

Demers realized she needed to really make a change when she found out she was pregnant. Turned away from multiple centers because pregnancies are considered too much of a risk, Demers turned to New Directions for Women.

She says she tried her best with the program for the 90 days she was there.

“They made me feel like I could do this and I was strong enough to do this. It was here where I decided that I was going to keep my baby,” said Demers.

When it was time to pay for the treatment, Demers got a partial scholarship from the center’s foundation, which was helpful since she didn’t have health insurance.

“The majority of women seeking treatment in this country have children. Over 70 percent of them have children and it represents the biggest barrier to why women do not get the help that they need. They don’t want to be away from their kids,” said Tania Bhattaharyya, New Directions For Women Foundation executive director.

Bhattaharyya says almost every woman at the center receives some amount of partial scholarships to stay in treatment for the duration that they need to get well. She says the foundation is able to help women thanks to generous donations from the community.

Demers is now 32-years-old and is a wife and mother to her 2-year-old son.

“I’m proud of what I went through and proud of who I’ve become,” said Demers.

The center ended up hiring Demers to be their alumnae coordinator to help other women and keep in touch with them after they complete the program.

New Directions is located on 2607 Willo Lane, Costa Mesa. The center serves women in any stages of their pregnancy and mothers with children up to the age of 13.