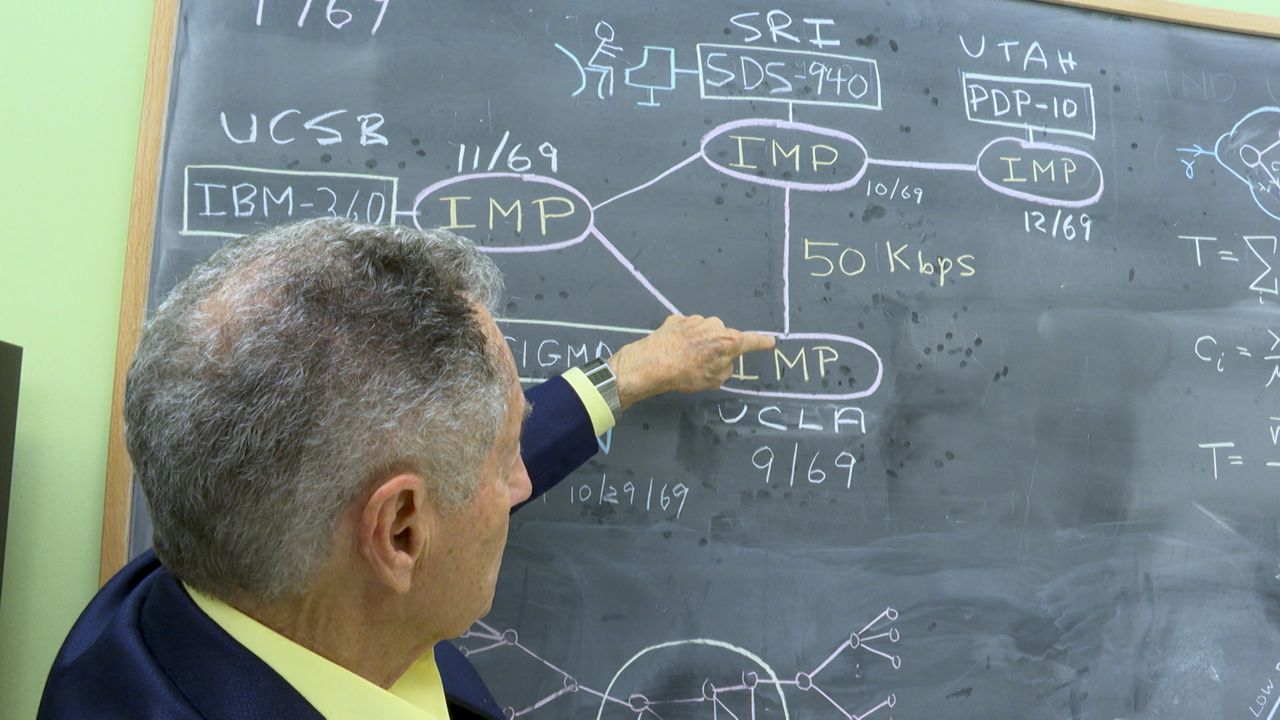 WESTWOOD, Calif. — Inside UCLA’s engineering school, there is a special room that has transformed all of our lives.  It's the birthplace of the internet.

"That’s the main attraction over there.  That machine is the first piece of internet equipment ever," said Dr. Leonard Kleinrock, whose research laid the groundwork for the internet.

Today, we call it a router, but at the time, it was known as an Interface Message Processor (IMP).  As a grad student at M.I.T. , Dr. Kleinrock had developed the mathematical theory of how these networks should operate, but there seemed to be no practical need or application.  He joined the faculty at UCLA in 1963.

"AT&T said it wouldn’t work.  They said even if it did work, we want nothing to do with it," Kleinrock recalled.

When President Eisenhower created ARPA (now called DARPA), it opened the door to more funding for computer science and testing at universities all over the country, but they needed a way for researchers to share information and resources.  UCLA became the focus because of Kleinrock’s research.

"Now they could use this thing that I had laid the research out for," Kleinrock said.

And at 10:30 p.m. on October 29th 1969, UCLA sent the first computer networked message to Stanford’s Research Institute.  They tried to type the word "login," but the system crashed after the 'L' and 'O' were sent.

Those two letters eventually  became the backbone for creating a much larger and advanced network we now call the internet.

"But we couldn’t have asked for a more prophetic, more profound more succinct message than "Lo," Kleinrock said.

"The capability here is far less than you’ll find in my 40-year old watch," Kleinrock laughed as he pointed to the machine.

He still works at UCLA and says the future will rely on the internet of things, everything we interact with based on a network.  He predicts we’ll be able to use our minds to access it.

"Even brain to internet interface, and it will be here well before 50 years," Kleinrock said.

For it’s centennial celebration, the university has been celebrating past achievements while looking ahead.  It recently opened the UCLA Connection Lab—dedicated to shaping the internet and computer networking.

Kleinrock will direct the program.

And with cutting-edge resources, UCLA’s Makers' Space is another tool helping to create that next generation of innovators.

"We really try to open our doors to all students, whether it’s grad students or undergrad, all are welcome to use our space," said Makers' Space Manager Charles Melikidse.

It’s strategically located on the hill close to the dorms.

"This is my first print.  3-D printed this skateboard for my little brother," said Freshman Rhea Thielbar.

"If you have a creative outburst, you can just come downstairs and work."

Efforts that could spark imagination and teamwork.

And they hope those strong leaders will engineer fresh ideas to carry the university and the world through the next 100 years.