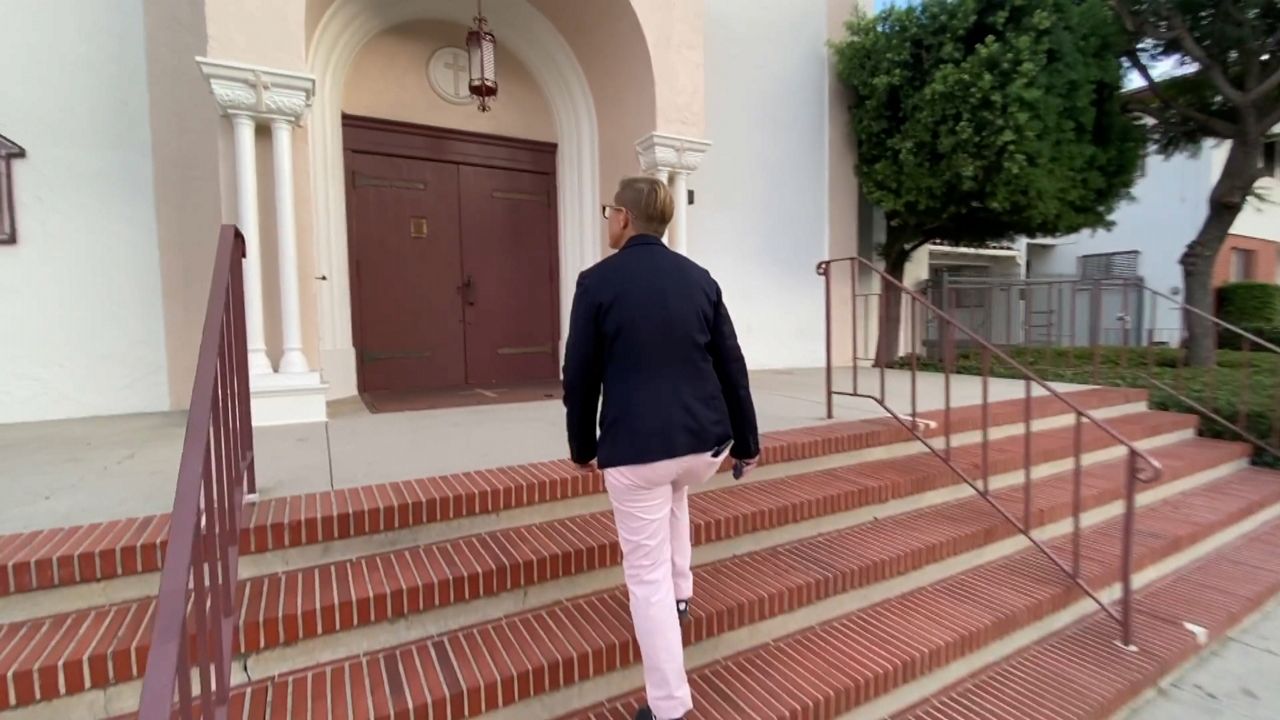 Jennifer O’Malley of Long Beach said that while she thought it was remarkable the Pope endorsed civil unions, she feels his words aren’t enough.

LOS ANGELES — Since the Safe At Home orders came down, fiancés Richard Zaldivar and Joselito Laudencia have a new Sunday morning ritual: watching virtual mass on their living room TV provided by their Catholic parish, the Cathedral of Our Lady of the Angels.

When mass was held in person, they made it a point to always sit in the front row. And though their participation is now remote, the pair says it doesn’t diminish the value and significance mass holds for them.

“Watching makes me feel so much at peace, I feel God, I feel connected to a family. A loving family. A family who sometimes doesn’t understand the problem in their society, but it’s our family,” Zaldivar said.

Zaldivar and Laudencia say their faith is at the center of their relationship and connecting with their church community is a priority.

During mass they text and chat with fellow parishioners online to stay as connected to the parish as possible.

When they heard Pope Francis last week express his endorsement of same-sex civil unions, they were both overwhelmed with hope.

“I thought the news was fantastic, because it was such an affirmation of what it means to be Catholic and gay,” Laudencia said. “This is huge for us and it shows us there is progression in our society.”

For the pair, the statement is a bold and necessary next step in the long journey toward justice and equality within the church. And it’s something they didn’t expect to see in their lifetimes.

“It means that change is in the air and sometimes change is slow,” Zaldivar said. “Look how long it took the United State of America to create same-sex marriage or to even acknowledge gay people. We just have to be patient and loving.”

But not all LGBTQ Catholics share the same enthusiasm.

Jennifer O’Malley of Long Beach said that while she thought it was remarkable the Pope endorsed civil unions, she feels his words aren’t enough. The church still does not approve of homosexual acts and will continue to teach that marriage is between a man and a woman.

“What does his statement mean? It’s meaningless without the recognition of marriage,” O’Malley said. “I recognize that some people will find hope in his tone. But they’re just empty words and that little bit of hope will be crushed when there’s no systematic change.”

O’Malley married her wife in 2008 and both remain committed to their Catholic faith. O’Malley is even part of an international initiative that ordained her as a Roman Catholic Woman priest, a move that breaks cannon law.

She said she and her wife are too connected to their faith and the Catholic culture to ever leave the church, but feels reform at the highest levels of the church is needed in order to make LGBTQ Catholics feel truly accepted.

“It’s frustrating that the church continues to deny myself and others in the LGTBQ community the right to the sacrament of marriage,” O’Malley said. “We must continue to say it’s not enough. We must fully recognize every person and treat them with the dignity they deserve and we can’t do that until we change the structures of the church.”

Zaldivar and Laudencia agree with O’Malley that the only way change will ever happen, is for Catholics who support reform to voice their needs and support for one another.