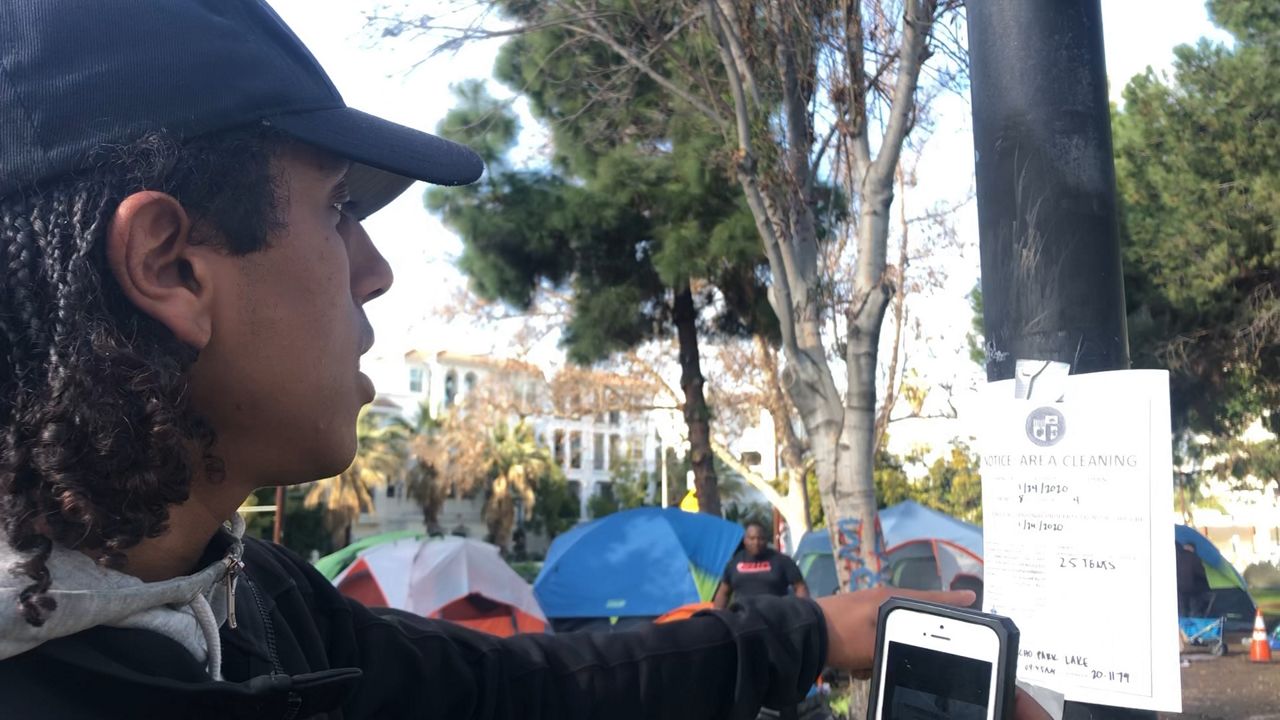 ECHO PARK, Calif. — On the northside of Echo Park lake lies a community of homeless individuals. Some have been there for months and others possibly longer. But in order to keep this public space clean and available for everyone to use, area cleaning fliers are commonly posted in the area.

But a recent notice brought alarm to the homeless community as it stated the area would need to be cleared out for five days.

“They came with a notice and a sweep. So, they do these sweeps right here. If you can see and it’s supposed to be a day of cleanups so we move across the street and then we move back. But this time, they had the notice and it was five days,” Ayman Ahmed said.

Ahmed has a tent in the park’s homeless encampment. He says the homeless community took a stand last week against the five-day cleaning. But officials with the City of Los Angeles and park rangers never showed up.

It’s a constant battle Ahmed says that makes it difficult to plan out his future.

“We have to conquer each day. It’s not like we can map out like five months or one month and have long-term plans. It’s like alright, today we beat back the city. Cool. Let’s go to bed and then tomorrow’s a new day,” Ahmed said.

As of Wednesday, L.A. Sanitation's Comprehensive Cleaning and Rapid Engagement (CARE) team will be taking over cleaning sweeps from the city’s Department of Recreation and Parks and enforcing 24-hour noticed cleaning sweeps citywide.

But last week’s notices are still a bit of a mystery for Ahmed and those living in the encampment.

L.A. City Councilman Mitch O’Farrell’s office said in an email, “ The Councilmember did not direct nor was our office aware of any action taking place - planned or otherwise - at Echo Park Lake.”

The Department of Recreation and Parks that is in charge of maintenance protocols in city parks said in an email, that despite the notice stating it was posted by LA City Park Rangers, “The clean up signs that were posted were not done by our department. This is a mystery that we have not solved. Yes, Nike did have a permit to film in the park but it was not in the same area as the encampments. When we schedule a clean up, notices are provided in advance. The notices that were posted were dated for Sunday 1/12/2020 for a clean up that was to start on 1/13. This is not how encampment clean ups are handled by our department.”

Ahmed said without his tent in Echo Park Lake, he doesn’t know where else he will be able to go.

With the next cleaning sweep possibly days away, Ahmed hopes he’ll be able to maintain his shelter until he can find his way into housing.