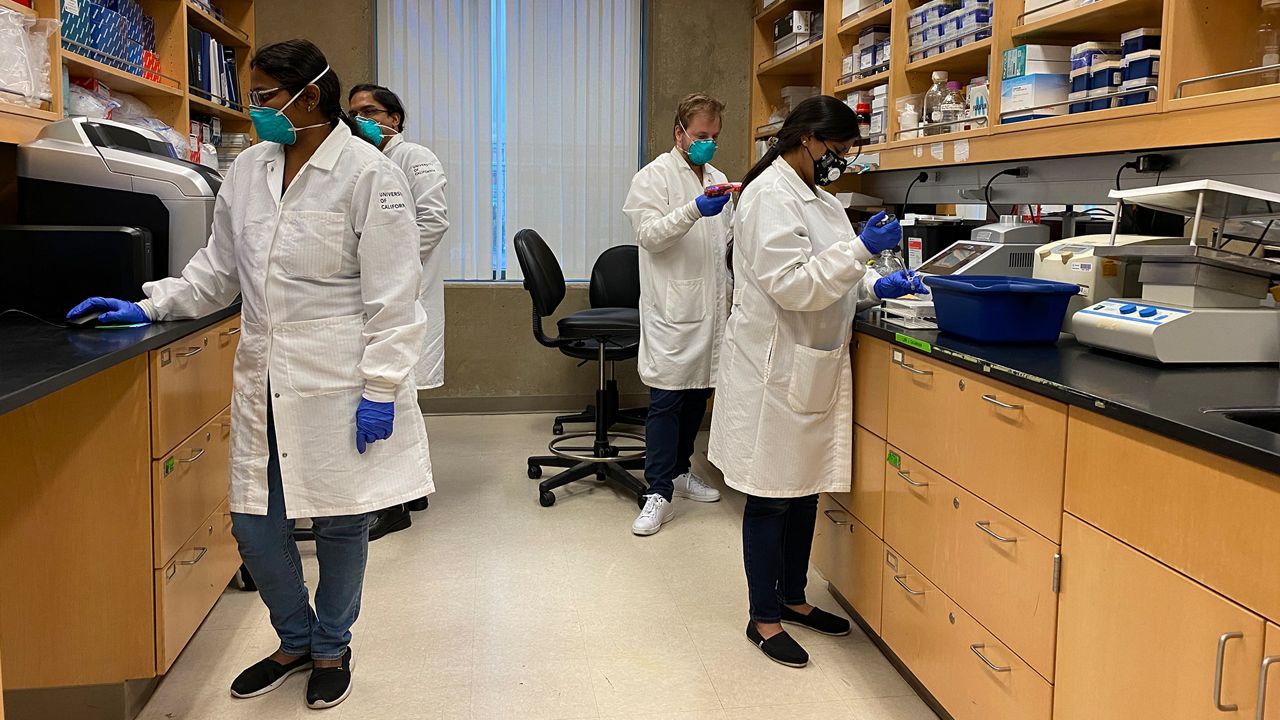 UC Irvine Researchers Working on a Vaccine for All Coronaviruses

IRVINE, Calif. — As scientists have developed effective vaccines for COVID-19, some countries are now dealing with outbreaks of new strains of coronavirus. Researchers at UC Irvine are preparing for what they say will be when, not if, another outbreak comes.

UC Irvine professor Lbachir BenMohamed, PhD, director of the Laboratory of Cellular and Molecular Immunology at the university’s Gavin Herbert Eye Institute, and his colleagues are developing a preemptive vaccine for all coronaviruses with a multi-million-dollar grant from the National Institute for Allergy and Infectious Diseases (NIAID). Because coronaviruses can mutate, experts at UCI have developed a vaccine that will attack the spike protein and additional proteins in SARS-Cov-2.

One of the elements the team is working with to test the efficacy of the vaccine is human blood. Researcher Ruchi Srivastava was pointing at a row of vials of blood and said, “This is from one patient.”

The blood is from a person who was COVID positive and asymptomatic. The blood will be one of the elements that will help determine whether the coronavirus vaccine Srivastava and her colleagues have been working on is effective.

Srivastava says she always knew she’d be working in the medical field, though initially she thought she’d become a doctor.

“I got into one program, but that was not one which I wanted,” she said.

So she decided to pursue a PhD and took a course about immune systems. She says she found a new path, but stuck to her original mission.

“I wanted to do something for humanity,” she said.

Srivastava explains how the team’s vaccine is different from the Covid-19 vaccines currently being administered to people. She said, “Pfizer and Moderna, they are targeting just the spike protein.”

She says if you look at SARS-COV-2, there are actually 24 proteins. Instead of just the spike protein, the team looked at the structures of each of those COVID-19 proteins. They also looked at different types of coronaviruses, not just the kinds humans can contract including the one that causes the common cold. The researchers also analyzed ones that have infected animals. They identified what each of the strains had in common.

Researcher Pierre Coulon says they found 16 identical parts, or what are called epitopes. Which he says is important.

“It is likely that for the next outbreak, those parts will remain the same too,” said Coulon.

So they’ve isolated those similar parts and are testing them in what they’re calling a pan coronavirus vaccine. They’re using mice to test it out, while also using patch technology to administer the vaccine. The vaccine would work sort of like a brake system with backups. If one of the parts fail, the vaccine would go to the next system – or epitope– and so on.

While the team has not yet been able to prove the vaccine they developed prevents the disease in mice, Coulon said, “What we proved was that the vaccine… can induce a good immune response.”

Coulon explains that means that after the mice received the pan vaccine, blood samples showed the mice had developed antibodies and other cells that help the immune system fight a virus.

The next step will be to vaccinate the mice with the pan vaccine, then infect the mice with COVID-19.  The scientists, including Coulon, will compare those mice with non-vaccinated ones. He says then the team will look for sympmtos, “Like the weight, the capacity of the mice to find the food, to smell the food. And if we see vaccinated mice vs control mice are less sick, it means that the vaccine probably worked.”

Coulon says this work to create this pan vaccine is to prepare for the future.

“As we always say, the next outbreak will come. It’s not if, it’s when. So now we’re trying to find this vaccine,” he said.

It’s exciting work for all the researchers, who also include: Swayam Prakash and Nisha Dhanushkodi.

Srivastava says she’s happy to do the work.

“I feel like it’s going to protect people with something, with the disease for which people are fighting for,” said Srivastava.