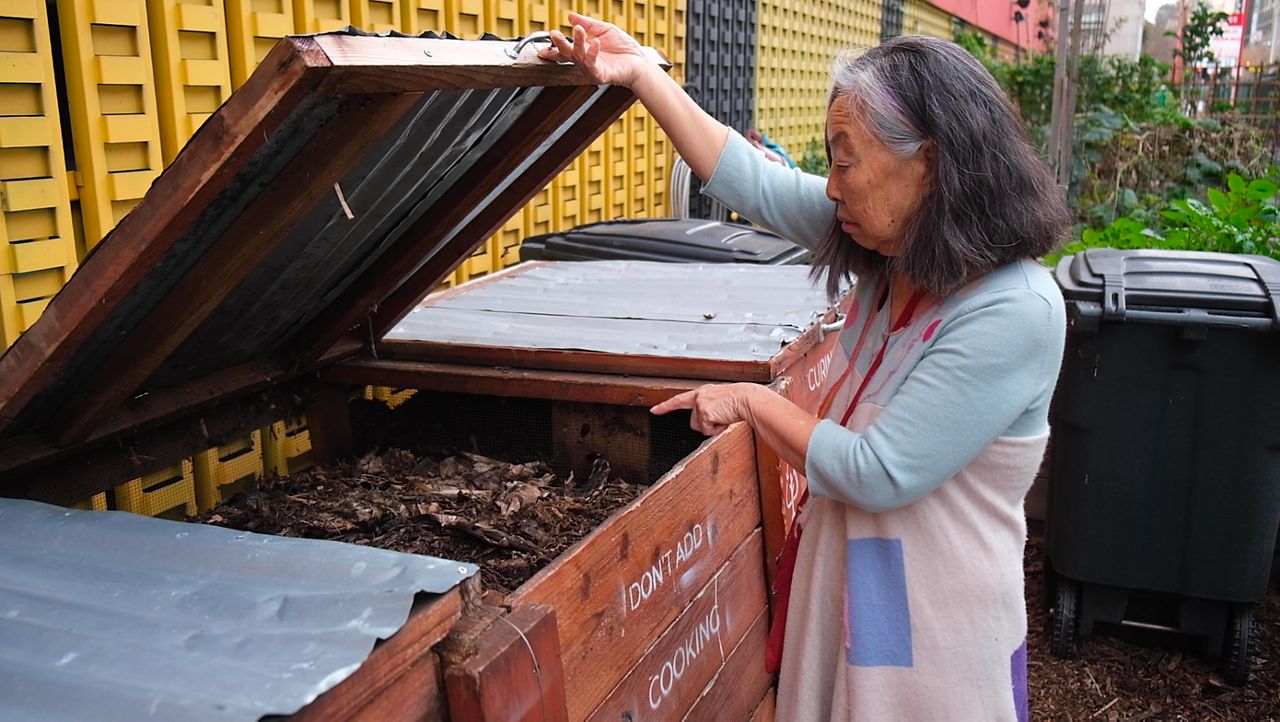 Since 2016, the Spring Street Community Garden in the heart of DTLA has been giving urban gardeners a place to grow. (Spectrum News 1/Kristopher Gee)

LOS ANGELES — Most of us are used to throwing away organic matter like banana peels and egg shells in the regular trash, but now, a new law in California says not so fast.

Since 2016, the Spring Street Community Garden in the heart of DTLA has been giving urban gardeners a place to grow. Rain Boe Wave was among the first to join this community and comes daily not just to garden, but also to bring her food waste to compost.

Wave says there is a demand for composting here, so she tries to come when it is not so busy.

“I know when it's full and when it's empty,” Wave said checking the compost bins, which are filled with organic waste like kitchen food scraps and garden trimmings. “So, I kind of time myself.”

Since the SB 1383 organic waste law went into effect earlier this year, all Californians will be required to do what Wave has been doing for years, separating organics from regular trash so that they don't end up in our landfills.

Wave knows from composting here that it might take some time for people to get things right, knowing what to compost and what not to.

And although meat waste is not allowed in community gardens like this one, under the new law, animal products will be processed.

CalRecycle, the state agency overseeing the organic waste program, is counting on all Californians to adopt new habits, separating food scraps into special bins in an effort to keep the organics out of landfills, where they create environmentally damaging methane.

“Our landfills accounted for roughly 20% of the methane emissions that California is producing,” explained CalRecycle director Rachel Wagoner. “So, by taking all of the food waste, and our yard waste and all that organic waste out of the landfills, we can have a massive impact on our fight against climate change.”

The statewide program will redirect most of the organic waste to large composting facilities, and similar to community composting, the finished compost will be put to all kinds of uses.

“Recycling of this waste is really an opportunity for us to feed our own agricultural crops, our community gardens, our parks,” Wagoner said. “I think Californians are very invested in their communities and their environment. So, we just need to give them the tools.”

Wagoner explained that each jurisdiction will implement the program differently, and it will take some time for things to ramp up. The goal is to have 75% of our organic waste diverted away from landfills by 2025.

Wave thinks that's not a moment too soon.

“I think we should have done that long ago, but it's the beginning. It's a start,” she said.

Wagoner advises Californians to check with their local governments for details about how to comply. While the program ramps up, there will be a two-year grace period before enforcement of SB 1383 will be addressed. The law does allow for fines to be levied, but as Wagoner says, for now, the focus is on giving Californians the tools they need to succeed.

CORRECTION: An earlier version of this story misspelled Rain Boe Wave's name. The error has been corrected. (Jan. 20, 2022)