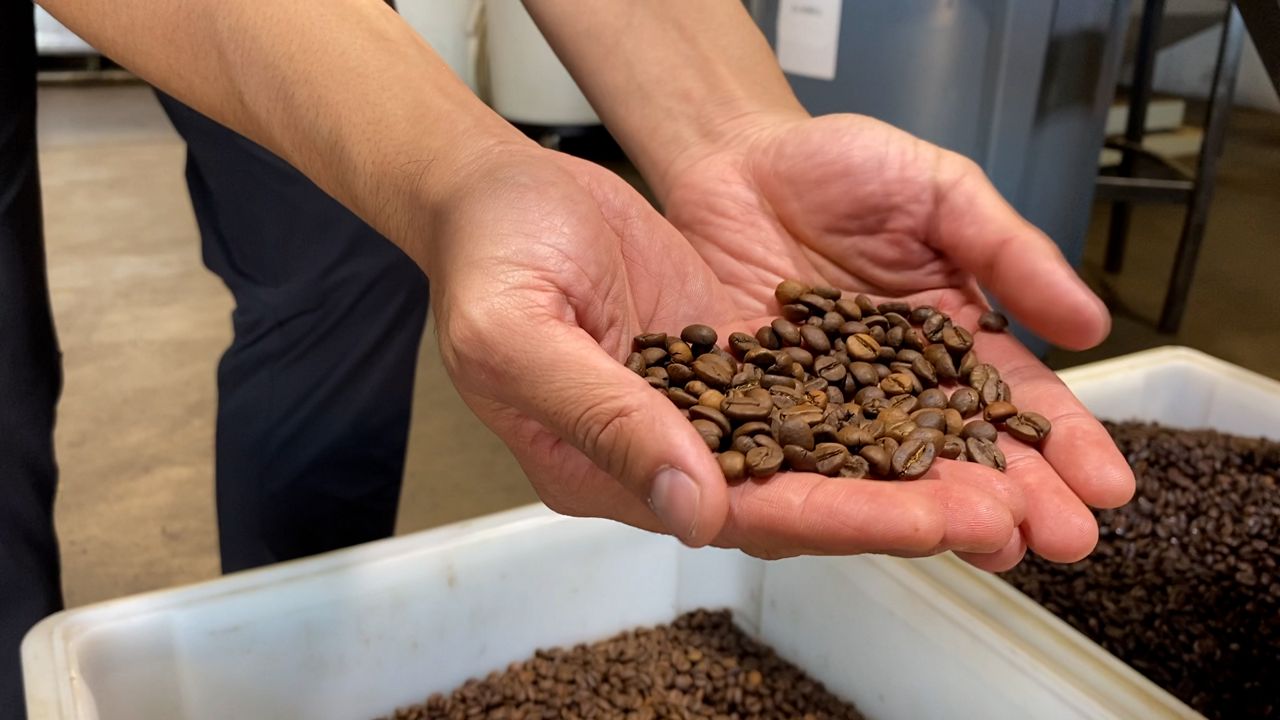 LOS ANGELES — Nothing beats the smell of fresh coffee beans, at least for Vince Nguyen.

“You can see the brown one. It’s very light in color,” he said as he picks up a handful of coffee beans at a roasting facility.

He said the beans sourced from the central highlands of Vietnam, where Nguyen grew up in the city of Pleiku.

“A city where we interact with coffee when I was a little kid,” he said.

Growing up, he drank it throughout the day, a rich beverage usually brewed with robusta beans, creamy condensed milk and a unique filter. Coffee practically runs in his family. Nguyen said as a kid, he helped his mom run a coffee stand after they moved to Saigon.

“We didn’t know what to do. We were clueless. And then my mom was like, let’s do the coffee cart because people in Vietnam, they love coffee and we want to promote the coffee from the city where we are from,” he said.

He moved to Southern California eight years ago and while he tried Vietnamese coffee stateside; it didn’t taste quite the same as a cup of joe back home. He even asked his sister to send him some beans from Vietnam and ended up launching his own coffee brand called Nam Coffee, paying homage to his home country and new country.

“‘Nam’ in Vietnamese means like, ‘from south,’ and where I live in California right now is Southern California,” he said.

Vietnam is the world’s second largest coffee producer behind Brazil and 95% of its exports are robusta coffee beans, which are stronger and darker than arabica, the most popular beans in the U.S.

Vietnam is expected to export almost 31 million bags for the 2022-23 fiscal year.

Nguyen said besides sharing traditional coffee flavors he grew up with, he is also supporting Vietnamese farmers and their communities by sourcing beans directly from them. He’s made several trips to see the farms in person.

“This is a chance for us to promote our culture, so I want to be the culture ambassador for Vietnamese coffee,” he said.

Nguyen said he’s running his business solo for now, fulfilling mail orders for customers and retail stores, doing marketing, sourcing and he visited roasters in six cities before he found the right one in Los Angeles.

He’s developed three distinct roasts, including one named ‘District One’ that reminds him of his childhood.

“The taste is very familiar to the coffee I had when I was a little kid,” he said.

A kid who had no idea he would one day become an entrepreneur, sharing those flavors in America.