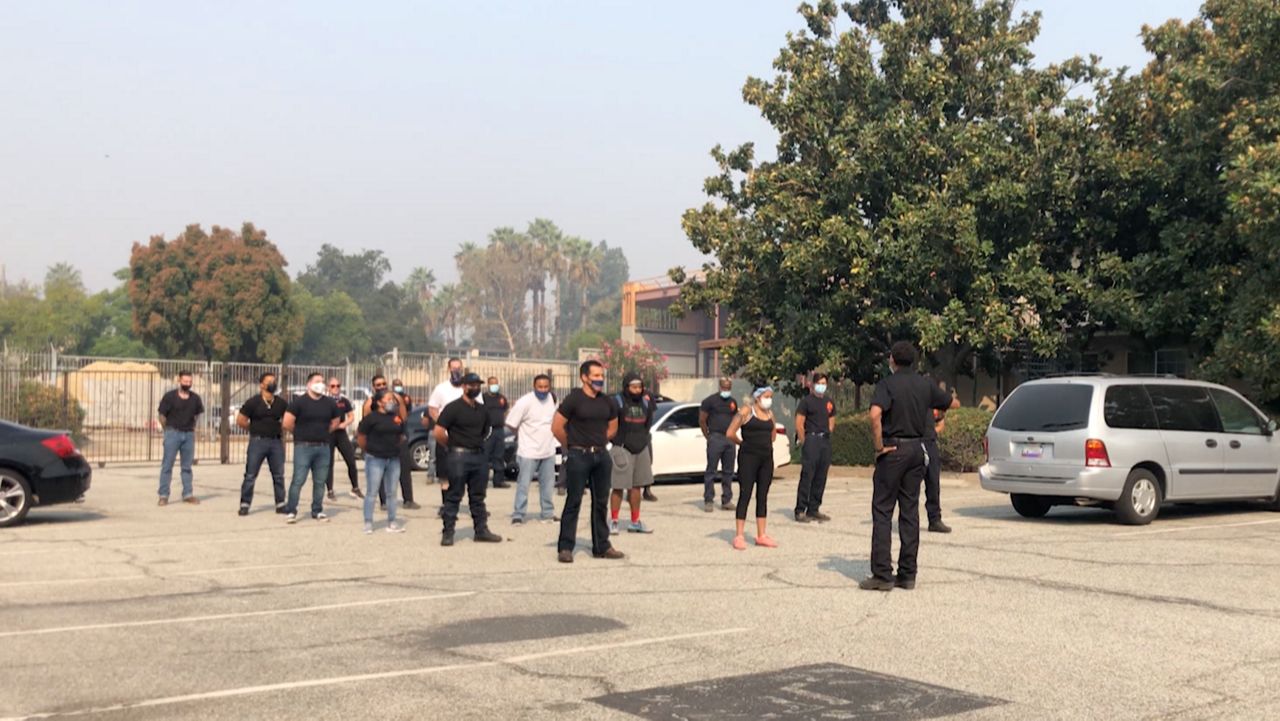 PASADENA, Calif. — "Put your hands behind your back" is something 23-year-old Devin Leagons has heard many times before.

"Usually when you're told to put your hands behind your back . . . you'll find yourself in a cell for the night or however long," said Leagons, who did 16 months in prison for having an unregistered firearm.

But lately, Leagons has been putting his arms behind his back as part of the militant training for a new program that promises him a second chance.

"If we were to judge everybody for their past mistakes, everybody would be pointing fingers at everybody," he said.

Pretty much everyone in the Forestry and Fire Recruitment Program has a record, including everything from drug possession to carjacking. Some are still on parole or probation, and at least one has a bullet in his body.

"I guess it's our time to prove ourselves," Leagons said.

For many of them, including Leagons, proving themselves began while working as one of California's 3,700 inmate firefighters.

"It's just something behind the scenes that people don't see," he said. "We really put in work, 24-7 sometimes, sometimes for weeks. We are out there on the fire line sleeping on mountains, and it's a hard job that people don't really understand what we are going through, but at the same time we love it."

Once inmate firefighters are released from prison, becoming a firefighter as a civilian can be difficult to impossible due to the background checks.

Royal Ramey was once in the same position as Leagons, so in 2015 after becoming a professional firefighter, he decided to co-found the Forestry and Fire Recruitment Program and show other people how to rise from the ashes.

"If we get a chance and a shot and they understand the structure of the fire service, then folks can be successful in their career."

The 10-month program combines physical training, fire behavior lectures, and help with job applications. The grant-funded education pays the participants $15 an hour, from 9 a.m. to 3 p.m., five days a week.

They are careful about who they choose, as less than a third of applicants get in. In the last five years, they've helped 80 people become professional firefighters. The program is quickly growing and has doubled in size this year.

They expect a lot from participants. After all, they have a lot of stigmas to overcome.

"We are losers. We are felons. We are not capable of being firefighters, and that is the biggest misconception," Ramey said.

Sometimes, it's unclear if they're trying to prove what they can accomplish to the world or themselves.

"We can be [sic] structure. We can have discipline. We can have integrity, and those are the things that make a public servant. [I] take the hard road to prove that I belong here," Ramey said.

Gov. Gavin Newsom recently signed a law that promises to make job applications for these folks a little easier, by speeding up the expunging of records of volunteer firefighters such as Leagons.

"Now, I can go full-time firefighting, and that's a great thing to hear, you know, having to be turned down so many times from different jobs based on my background and past mistakes."