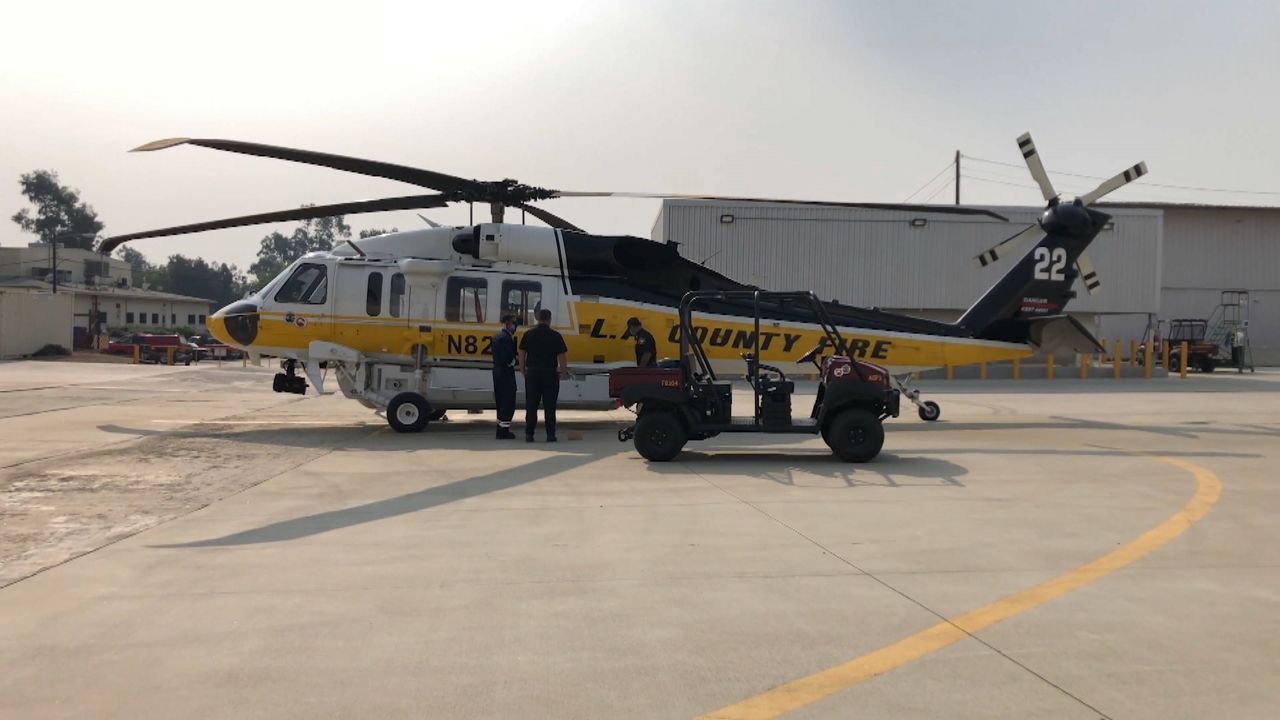 L.A. County has two new Firehawks this fire season, for a total of five in its inventory.

PACOIMA, Calif. — As the wildfires continue to threaten homes and lives, sometimes it feels like SoCal is battling an enemy in warfare.

So who better to fight that war than an actual combat pilot with a military-grade machine.


“I pretty much was involved in every major conflict since 1987, specifically in Iraq and Afghanistan,” said Mike Sagely.

Sagely spent 22 years flying Blackhawks for the U.S. Army. In 2008, he transitioned to fighting fires as a senior pilot with L.A. County Fire Department’s Air Operations.

“I knew that when I transitioned from the military, that I was going to want to do something with a sense of purpose and value," he said. "And I really wanted to try and make sure that what I brought to the work was gonna make differences in people’s lives, and that gives you a satisfaction that kind of goes beyond anything monetarily.”

It was a natural transition for Sagely since L.A. County is one of the few departments in the country that uses modified Blackhawks to tackle fires. They call them Firehawks, and this fire season the county has two new units in their fleet.

“We work these aircraft extremely hard on a fire," said Sagely. "In fact, in many instances, in my opinion, we work them harder than what a typical day in the military might be. The other day, on the Bobcat Fire, in a seven-hour period I did 90 snorkel cycles, which equates 90 fire drops,” says Sagely.

L.A. County Fire pioneered the use of Blackhawks to fight wildfires 20 years ago, working with manufacturers to harness the chopper’s speed, capacity, and sturdiness to combat our enemy here at home.

Sagely said the first thing they did was raise the notoriously low Blackhawk body off the ground to make space for a water tank.

“The primary modification here is the extension blocks on the landing gear, and what that does ... is that it elevates the aircraft high enough for us to install a one-thousand-gallon tank," he said.

That tank holds three times as much water as their other five Bell 412 helicopters.

“The doors run the entire length of this very large tank," said Sagely. "They open in such a way that there is a massive volume of water that moves out at a very high pressure because of the V-shape of the tank, through a single door system that has a very good penetrating force for the heavier brush that we work in."

Water gages inside show him how much water is in the tank and give him control over how to deploy it.

“With a variety of settings that equate to number of gallons placed on the ground per square foot, we can change that setting based on the types of fuels that we are working in,” he said.


But it’s not just about having water in your tank — it’s also about how the water gets in there. The county’s other significant modification to the Firehawk was to install a permanent water hose that could automatically roll up and down. Sagely said that makes the chopper safer and faster.

“The difference in many firefighting aircraft that do not have a retractable snorkel, is that the snorkel is now dangling beneath the aircraft which limits its forward speed.”

And speed is key when fighting a fire — that’s why hand crew firefighters are always on standby for the next one. That combination of man and machine power, explained Sagely, gives them the best shot at saving property and lives.