May Gray and June Gloom, the marine layer isn't isolated to California

We wrapped up the month of April, and we are no longer looking forward to May because it's already here. Now we can look forward to June.

Ah yes, the spring and summer months when people from all over the world come to enjoy our sun-soaked beaches and warm ocean water.

Sun worshippers from around the world may be disappointed to find their summer beach vacation ruined by what locals call May Gray or June Gloom.

If you are a sun worshiper, plan your Southern California beach vacation in late summer and early fall when air and ocean temperatures are much warmer with less fog.

This low-lying blanket of clouds is better known as the marine layer; a shallow deck of stratus clouds that hugs the coastline. During May and June, the marine layer may extend into the coastal slopes of our local mountains.

This setup comprises warm air, cold ocean current and a desert (or at the very least, a relatively warmer inland area).

The marine layer forms when warm moist air passes over a body of relatively colder body of water, or in California's case, the cold California Current. When the warmer air passes over the colder water, it cools and condenses because the air mass can no longer hold the water vapor that it once could when the air mass was warmer.

Warm air can hold more water vapor than cold air. So when moisture is condensed out of the air mass, tiny water droplets form and eventually become the massive stratus cloud that is called the marine layer.

Sometimes it extends from Baja California to the Canadian border. 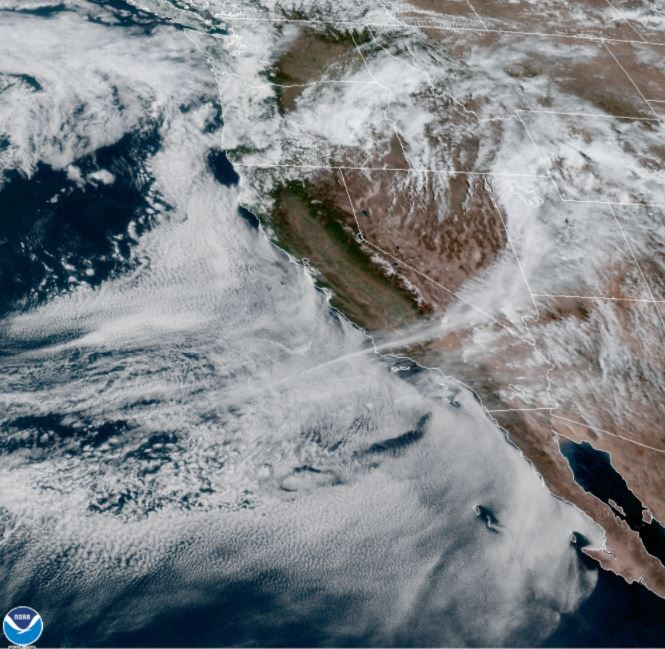 It's not just California (or the West Coast of the United States) that has a similar setup of warm air, cold ocean currents and deserts that create marine layers of fog banks.

According to World Atlas, two of the foggiest places on Earth are in California: Point Reyes, which is a prominent cape that sticks out into the Pacific just north of the San Francisco Bay, and the City of San Francisco itself.

An inversion is created because the cold Humboldt Current runs north along the coast. This caps the atmosphere and prevents the clouds from continuing to rise into rain or thunderstorms.

Grand Banks of Newfoundland, Canada, has fog that is formed when warm moist air above the Gulf Stream moves north over the Labrador Current. As the two air masses meet, a layer of fog is created. A thick fog layer is created almost every day.

Another desert known for its fog is the Namib Desert, in Namibia on the southwest coast of Africa.

Again, warm air is forced over the cold Benguela ocean current. The moist air condenses and is forced inland because of the pressure gradient force that drives the winds inland from the cold ocean to the warm land.