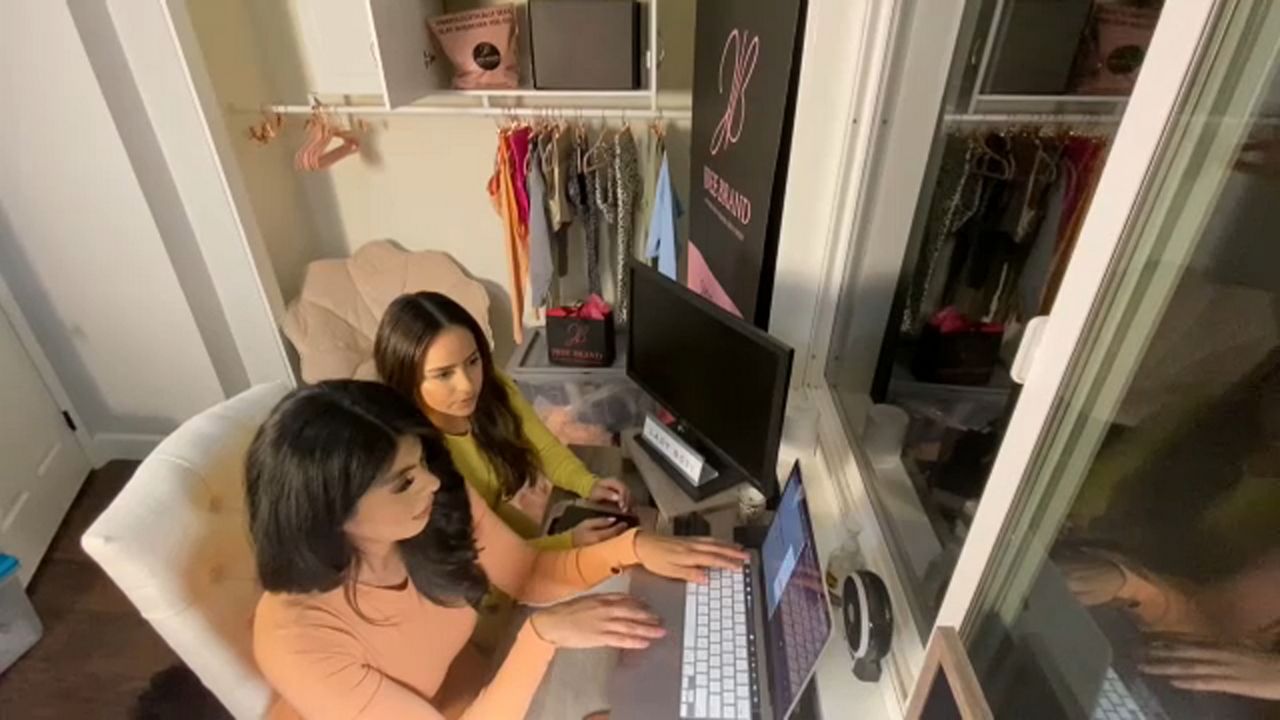 Jacqueline Maldonado and Brianna Contreras have been wanting to open their own e-commerce business for 15 years and finally took their leap of faith in May 2021. (Spectrum News 1/Taylor Torregano)

LOS ANGELES — The Long Beach and Los Angeles ports continue to be inundated with cargo, slowing deliveries for businesses near and far as the two collectively handle about 40% of all domestic imports.

On Tuesday, U.S. Labor Secretary Marty Walsh came to town to meet with LA Mayor Eric Garcetti and other officials at the Ports of Los Angeles and Long Beach.

For the owners of a new small business called JBee Brand, the issues at the ports have severely affected their business. They couldn’t have their first Black Friday sale because they didn’t have the inventory to sell and their latest shipment has been sitting somewhere at the port for weeks.

This business is a dream come true for these best friends, but it could soon become a dream deferred.

Jacqueline Maldonado and Brianna Contreras have been wanting to open their own e-commerce business for 15 years and finally took their leap of faith in May 2021.

"We’re very into fitness, we have been for years now and we’ve always been really into the cute, fashion gym wear but we could never really find anything different," Contreras explained.

So they started their own fitness wear brand called 'JBee' with clothes that made them feel confident and comfortable, hoping it would empower other women to feel the same.

After months of searching to find the perfect supplier overseas, they were packing order after order and just hitting their stride when suddenly the inventory stopped coming in.

They normally have boxes that fill their room, but now the product is down to the final bin.

"At the ports we have about 300 units, which is not that much for a small business, but for us that’s huge, you know that’s 300 customers," Maldonado explained.

It’s sitting somewhere on the San Pedro Bay and the business owners say they have no idea how long it’ll take to be unloaded.

The backlog is so severe that Walsh came to see the operation for himself, meeting with Garcetti and other leaders from both the Port of Los Angeles and Port of Long Beach.

During a press conference, they made several mentions of the bipartisan infrastructure bill just signed into law this month that Walsh says will alleviate some of these supply chain issues.

“We’re going to be able to get the goods to consumers, to the factories, with more efficiency than ever before in our nation's history," Walsh explained.

Walsh says the law will invest $17 billion into our ports and waterways and with the twin ports in LA and Long Beach being the largest in the nation, Garcetti says he’s working to win 40% of that money since SoCal ports move about 40% of America’s goods.

He wasn’t shy about placing the blame on the private sector, saying this backlog is a result of pandemic fear.

“I think a lot of the big retailers panicked," Garcetti explained.

It had ripple effects for the smaller start-ups like Maldonado and Contreras', who don’t even have an exact shipping date to give to their customers because they can’t get a clear answer on when their inventory will be unloaded.

"Because of the issue on the ports we do plan to manufacture our stuff here. That's a really big, top goal for us next year," Contreras explained.

It's a move that could be a lot more expensive, but at this rate, it could be the only way to keep their dream alive.