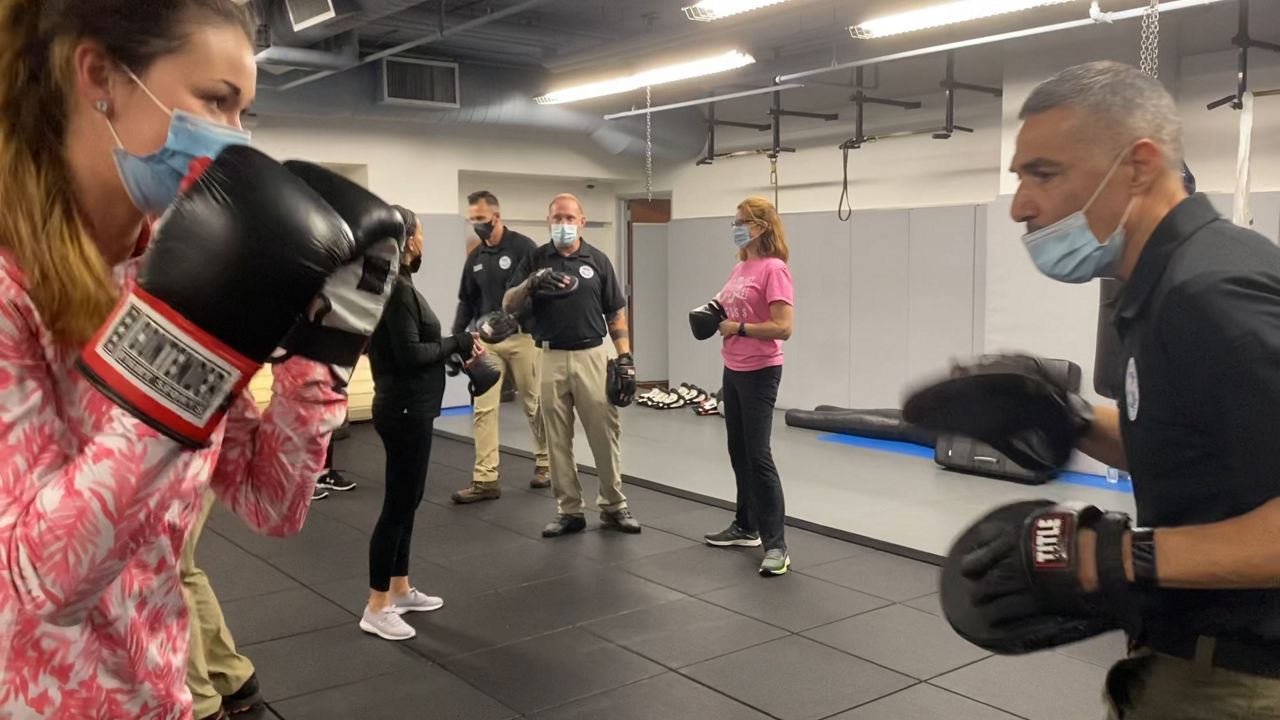 LOS ANGELES — It's an issue that continues to get worse, unruly passengers assaulting flight attendants on flights.

A report by the Association of Flight Attendants found that of 5,000 surveyed, 85% of flight attendants said they had dealt with unruly passengers in 2021.

Amid this rise, the Transportation Security Administration is holding self-defense training for crew members across the country.

The CEO of American Airlines said the incident on a flight to Santa Ana where a passenger broke a flight attendant's nose last week was one of the worst displays of unruly behavior they've ever witnessed.

On Monday, yet another flight flying into LAX was diverted for another disturbance among passengers.

The flight attendants taking the training are hoping they never have to use these new skills, but if there is an attack in the air, they'll be ready.

"I was a bit nervous coming in, but I'm using the adrenaline and the nerves to kind of help me out with the combat in case I have to ever deal with that," Rongier said.

The chances are a lot higher these days, even though Mallory's office is 35,000 feet in the air.

The flight attendant attended the four-hour class teaching commercial flight crew members how to respond to worst-case scenarios that are now much more commonplace.

Rongier has only been a Delta flight attendant for three years but said she's seen a significant increase in unruly passengers since the pandemic.

"When you think of a flight attendant you don't think you have to go into combat mode, but in these unprecedented times, safety and security is our number one priority," she explained.

Thankfully, Rongier hasn't been involved in physical altercations but has had several verbal run-ins with angry passengers. She knows many colleagues who have been attacked, she said.

Last week, the Irvine man who allegedly punched a flight attendant in the face was arrested on federal charges in Denver after breaking the attendant's nose on a flight that was supposed to be landing in Santa Ana.

It's just one of several incidents contributing to what the Federal Aviation Administration calls a disturbing increase of airline passengers with threatening or violent behavior.

The FAA said it has received more than 5,000 reports of unruly passengers this year alone, most of which were mask-related incidents.

Of those reports, more than 900 were further investigated. It is a significant spike compared to only 183 investigations just last year and 146 in 2019.

Federal air marshals tell the flight attendants that this course is designed to give them the tools and mindset to address these issues should they arise.

It's the confidence Rongier said she needed and why it led her to take the class in the first place.

"Ever since the pandemic, people have really just changed. People are selfish, people are rude and we really just have to be on guard these days," she explained.

The flight attendants were then able to put all of the skills they learned to the test in a plane simulator.

Rongier said she feels better prepared to react quickly, and she was using the quick jabs and knee strikes she learned in training.

"[It was] super intense, still catching my breath from it," she said. "It's super adrenalating."

The TSA holds the training free of charge for active crew members in 24 major cities across the country. To register, visit the TSA website.