As part of the L.A. Green New Deal, the city set a target of 10,000 commercial EV chargers by 2022. (Photo courtesy of Mayor Garcetti's office)

LOS ANGELES — If you drive a gas-powered car, you probably haven’t noticed, but EV chargers have been popping up all over the city — on street lamps, at libraries, workplaces, apartment complexes — even the L.A. Zoo. Count them up, and Los Angeles now has 11,045 commercial chargers, far exceeding its target of 10,000 and doing so almost 21 months ahead of schedule.

“The EV revolution is upon us,” said L.A. Mayor Eric Garcetti in an interview with Spectrum News 1. “Anyone who’s driven an EV knows the technology is there.”

LADWP was able to speed up the process and hit the target almost two years early by establishing a staff dedicated to processing EV charging station service requests, and leveraging incentives from the California Air Resources Board, as well as offering generous rebates for commercial entities to install EV chargers that in some cases reduce the installation cost to zero.

As part of its Charge Up LA! program, LADWP offers up to $5,000 per level 2 charger if deployed in a disadvantaged community, up to $75,000 per fast charger, and as much as $125,000 for each charger capable of fueling a medium- or heavy-duty EV. The result is an evolving network of charging stations installed on a variety of public and private properties, from power poles and bus depots to city buildings, Los Angeles International Airport, workplaces, condos, and multi-unit dwellings. 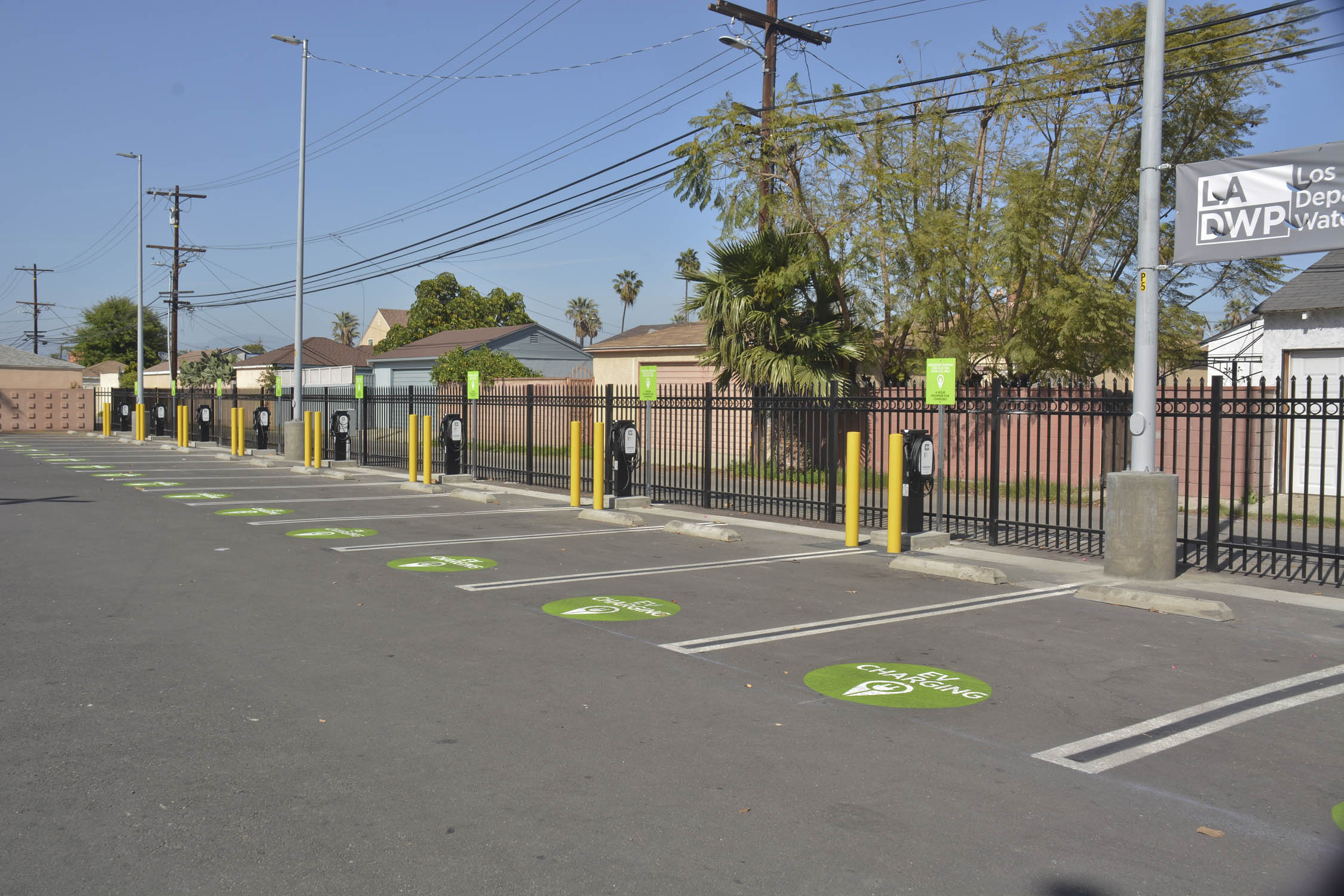 Of the 8,157 commercial EV charger rebates LADWP has issued, more than 60% have been for multi-unit apartment buildings. Historically, apartments have been a barrier to EV ownership, so the push to equip them with chargers is significant. “If they are renting or in an apartment, they have the infrastructure to charge their vehicles,” Kerr said.

Anyone who drives an electric vehicle has the same issue: where to find a place to refuel. While the majority of EV owners recharge their cars at home, commercial chargers are critical to getting more people to buy in, especially those who rent their homes. In 2019, 55% of L.A. households were renters, according to the U.S. Census Bureau American Community Survey.

For people who live in apartments, the No. 1 place to charge is at work, said Joel Levin, executive director of the battery-electric advocacy group, Plug In America. “To own an EV, you need someplace to reliably charge on a regular basis. If there’s no place to reliably recharge, you’re probably not going to buy an EV, and if you do, you're going to hate it.”

For Angelenos who are not able to charge their EVs at home or at work, LADWP is installing fast charger plazas throughout the city and is working to add more of them at public facilities and parking lots. DC fast chargers can refuel an average EV to 80% in about 30 minutes, compared with several hours with a level 2 charger.

The rapid increase in public chargers of all kinds is necessary to help meet ambitious EV adoption goals at the city, county, and state level. As part of the Green New Deal, the city is targeting 80% electric and zero emission vehicles by 2036 and 100% by 2045, and for 100% of city and transit fleets to be electrified by 2028. On a state level, Governor Gavin Newsom has mandated that all new passenger vehicles sold in California be zero emissions by 2035, and that 100% of medium- and heavy-duty vehicles be zero emissions by 2045.

“As we move toward transportation electrification to create cleaner air and reduce greenhouse gas emissions, the opportunity is to really ensure that everybody has access to EVs,” said Matt Petersen, chief executive of the Los Angeles Cleantech Incubator, a nonprofit that brings together public, private, and government stakeholders to accelerate green technology.

“One of the ways we do that is to make sure charging stations are in every neighborhood, and that’s part of what that goal of 10,000 EV chargers and achieving it represents: increasing access and ensuring equity that chargers are available everywhere, not just the Westside of L.A.”

CORRECTION: An earlier version of this article incorrectly described some chargers as non-public and did not include the most up-to-date number of those chargers. The errors have been corrected. (January 6, 2021)