The Metro Micro on-demand rideshare service can seat up to 10 people per vehicle. (Photo courtesy of Metro)

LOS ANGELES — From buses to scooters to Uber, COVID has had a negative effect on shared mobility of all kinds. But that isn’t expected to last forever. Angelenos will always need a way to get around, and starting Sunday, the Los Angeles County Metropolitan Transportation Authority will be giving people another option. It’s called Metro Micro.

A cross between on-demand ride-hailing and public transportation, the new van service will launch in the Watts/Willowbrook and LAX/Inglewood areas, letting passengers summon a trip and travel anywhere within the designated service zone for $1.

“We had a sense there was a major market shift as it related to [companies like Lyft] and their attraction to transit customers, so we sort of started from there,” said Metro MicroTransit Project Manager Rani Narula-Woods.

Metro has been exploring on-demand technology for three-and-a-half years, she said, looking at ways it could be integrated with the transit agency’s fixed network of buses and trains that service almost 1,500 square miles with 165 bus routes and six train lines. The new service is launching in some of Metro’s busiest areas for bus and train travel, offering passengers a more flexible option for getting to their destinations without the need to transfer. 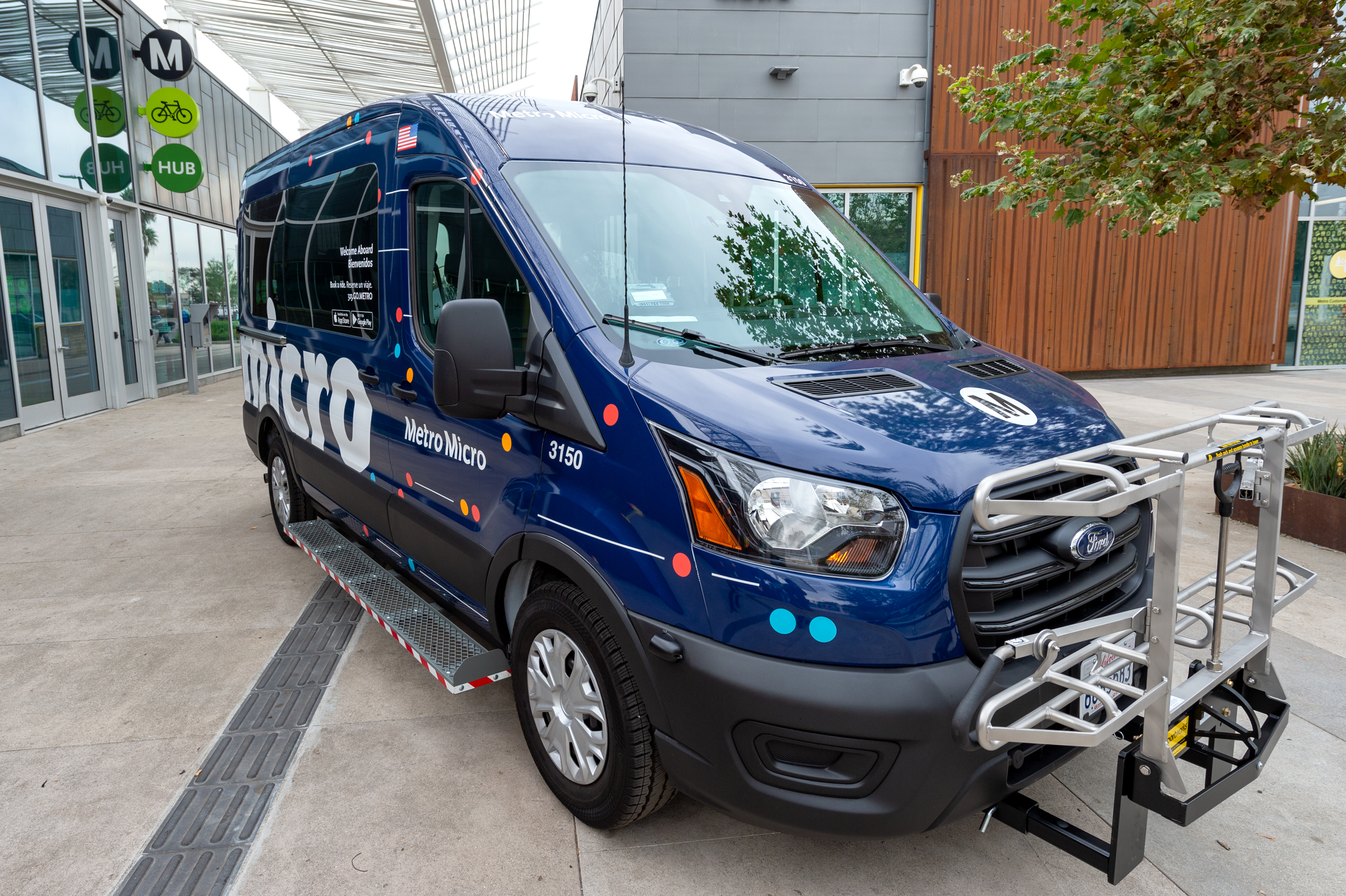 When requesting a ride, travelers will have a choice of different departure times. They can also book multiple rides in advance and book them up to two weeks in advance. Intended for short vehicle trips, wait times will be similar to public transit, Narula-Woods said, with a maximum wait of 15 minutes.

“The logic here is less the transportation network company mindset of being quickest,” she said. “It’s the transit rider mentality, which is, ‘Let’s get you on time to your final destination.’”

Metro Micro trips can be summoned through an app, booked online, or arranged with a phone call (323-466-3876). Able to accommodate wheelchairs, bicycles, and extras such as baby strollers and grocery bags, each vehicle can seat up to ten people, but because of COVID and the need for social distancing, capacities are currently capped at 50%.

While the service will not launch until December 13, Metro has already begun pre-booking rides. Customers can pay with a TAP card or with a debit, credit, or prepaid card. 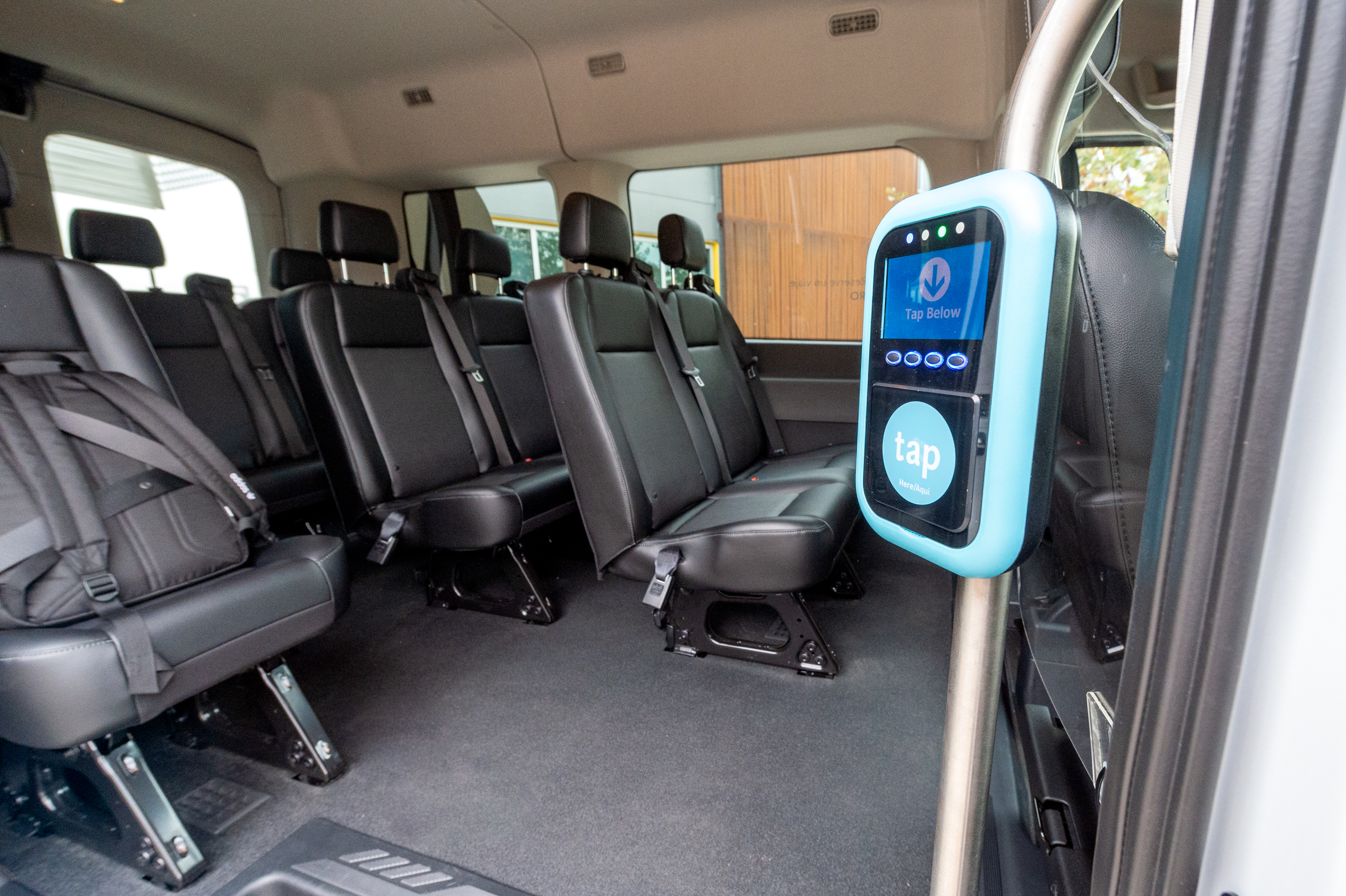 Metro Micro has a fleet of 100 vehicles — a mix of Ford Transits and Dodge Grand Caravans, the latter of which are able to accommodate at least one wheelchair and, in some vehicles, two. A portion of the fleet will also have transit-quality bike racks. All of them are driven by Metro employees and serviced by the private ride-hail company RideCo, Inc., which provides the technology that enables them to pool rides in a manner similar to the carpooling options Lyft and Uber operated prior to COVID. The service launching Sunday will start with 16 vehicles.

Metro has experimented with so-called microtransit before. It partnered with Uber when the Expo line was first extended to Santa Monica in May 2016, offering $5 discounts off UberPOOL rides to and from the new stations in an effort “to understand if people were interested in on-demand technology,” Narula-Woods said. “The answer was yes.”

From there, Metro partnered with the on-demand vanpool operator, Via, providing rides in North Hollywood, El Monte, and Compton — a service that is scheduled to end next month. While Via was intended as a first- and last-mile solution that helped riders get to or from a transit station, Metro Micro is more flexible, designed to get passengers anywhere they’d like to travel within the designated service zone, not just to an existing transit hub.

Metro’s Micro service is meant to work hand in hand with the NextGen Bus Plan that also begins to phase in on Sunday. Under the new plan, some bus lines will see more frequent service or be modified with route changes to speed up trips, but other lines with low ridership will be discontinued.

Metro Micro is intended to fill some of the agency’s service gaps for existing passengers, while also developing new ridership.

The Watts/Willowbrook area, for example, is home to more than 40 schools, as well as healthcare institutions. Riders of the service could be families that need to shuttle their children to after-school activities or patients going to doctor’s appointments. At launch, the Watts/Willowbrook service will run seven days a week, from 5 a.m. to 11 p.m. 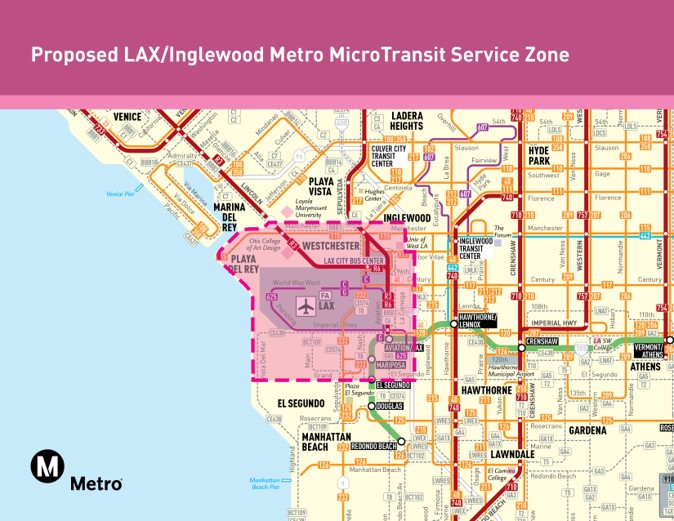 In the LAX/Inglewood area, Metro Micro is intended to serve shift workers at LAX or at nearby hotels who would otherwise need to stand in a dimly lit area waiting for a bus with infrequent service. Because LAX is experiencing fewer travelers due to COVID, at launch, the LAX/Inglewood service will operate Monday through Friday from 5 to 10 a.m. and from 2 to 7 p.m. 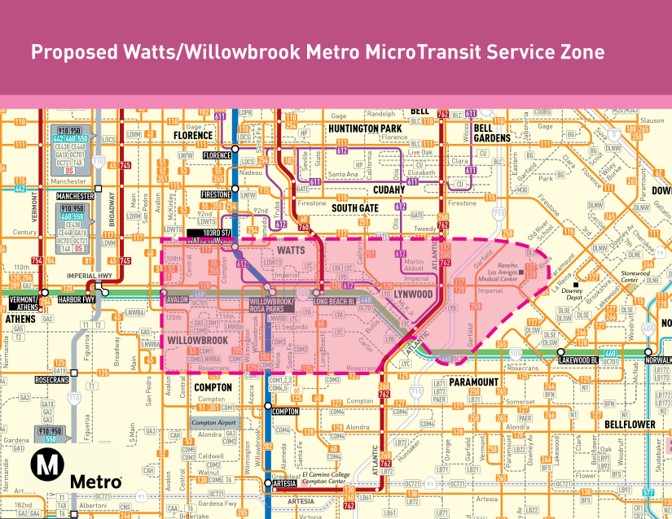 Metro has big aspirations for its new Micro service. Over the course of the three-year pilot, “we would love to see less people driving by themselves, so our hope is this will take some real cars off the road,” Narula-Woods said. The agency is also hoping that the real-time travel information Micro uses will lead Metro, as a whole, to begin offering better real-time information for its buses and trains.

It is also a learning opportunity.

“Metro will learn much more about where people actually want to go from and to, and when they want to do it,” said Juan Matute, deputy director of the Institute of Transportation Studies at the University of California Los Angeles. “With a fixed-route bus, you know where you pick them up and go, but you don't know how far they walked or if they used some other device.”

Metro Micro will help the county’s transit agency “learn a lot about demand that can better serve it in the future,” Matute said. “People are making fewer trips right now, and they’re avoiding shared modes, but when the pandemic is over, people will be ripe for change in getting around.”

Other transit agencies have tried similar on-demand services and failed, he noted. Kansas City, Mo., and Boston, Mass., both partnered with the Australian ride-hail platform Bridj only to terminate the service. Chariot, owned by Ford Motor Co., operated a commuter shuttle service in the Bay Area and around UCLA, but it went belly up last year.

Metro, however, is a different animal. It has enough money to experiment, and if something like its new Micro system doesn’t go well, Matute said, “it’s not the end of Metro.”

CORRECTION: An earlier version of this article incorrectly stated the name of Metro Micro's service partner. The error has been corrected. (December 14, 2020)