No on 22 poster on a Drive to the Ballot caravan car. (Spectrum News/Susan Carpenter)

DOWNTOWN — To a soundtrack of blaring horns and rap music, the cars rolled in by the dozens. Chevy Traverse, Toyota Prius, Nissan Rogue. All of them were owned by rideshare drivers as part of a two-day Drive to the Ballot protest encouraging Californians to vote no on Prop 22, the Nov. 3 ballot initiative that would exempt app-based transportation and delivery companies from providing employee benefits to certain drivers.

“Uber and Lyft claim they’re the cutting edge of technology, but when it comes to labor laws, they’re in the stone age. The minimum wage should be the same for everyone,” said Service Employees International Union of California President Bob Schoonover.

Schoonover was speaking from a truck bed stage strung with a banner that read “Sick of Gig Greed” in the parking lot for SEIU Local 721, the largest public-sector union in Southern California. His audience: an enthusiastic crowd of rideshare drivers, their cars decked out with placards and flags encouraging Californians to “Slam the Brakes” and vote “No on Prop 22.” 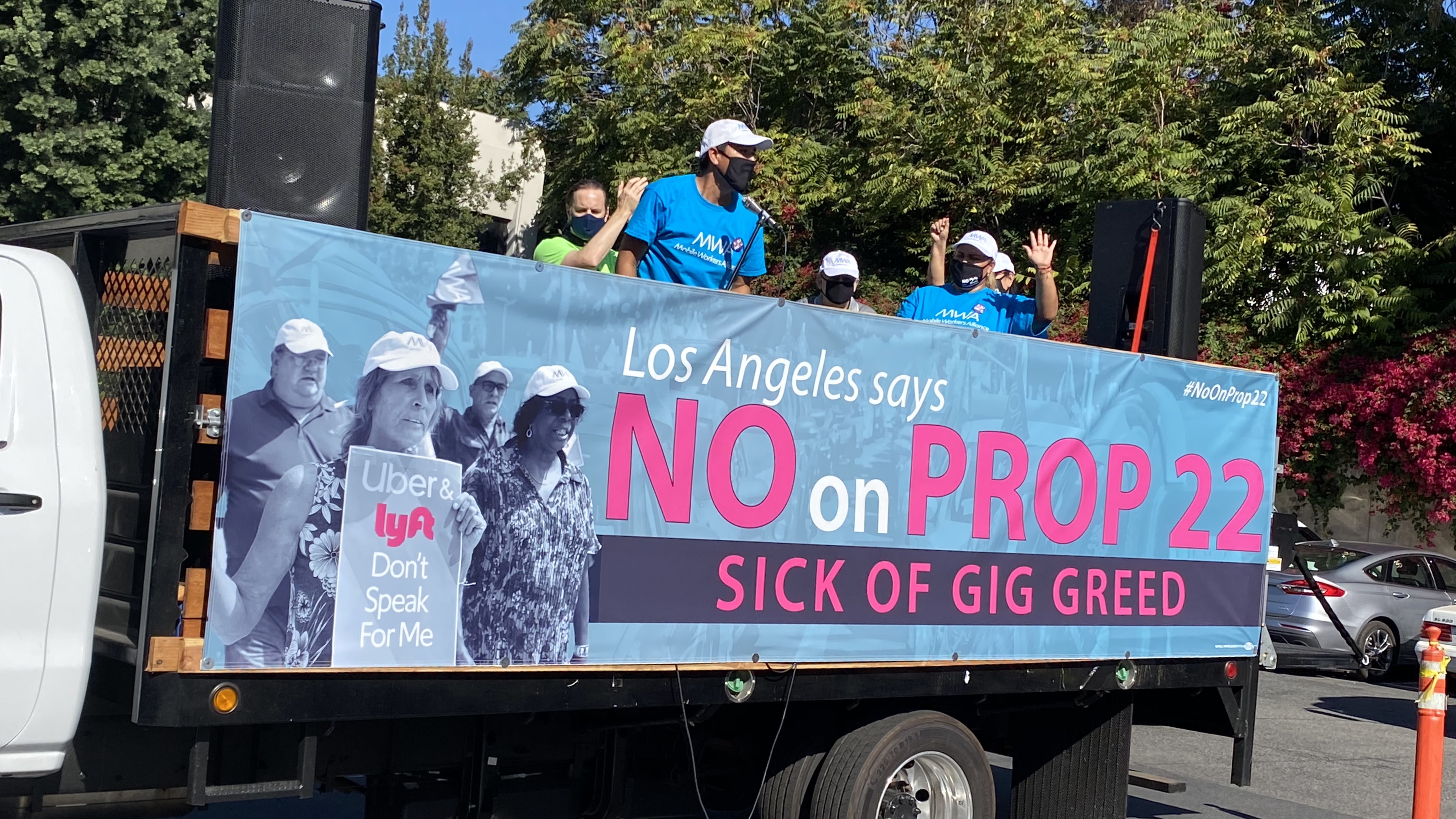 Some of them had driven up from San Diego early Wednesday morning to join with drivers from the L.A. area as part of a two-day caravan collecting even more cars and trucks in Bakersfield and Fresno before arriving at Uber’s San Francisco headquarters Thursday morning. Many of them were affiliated with the rideshare activist groups, Mobile Workers Alliance and Rideshare Drivers United. 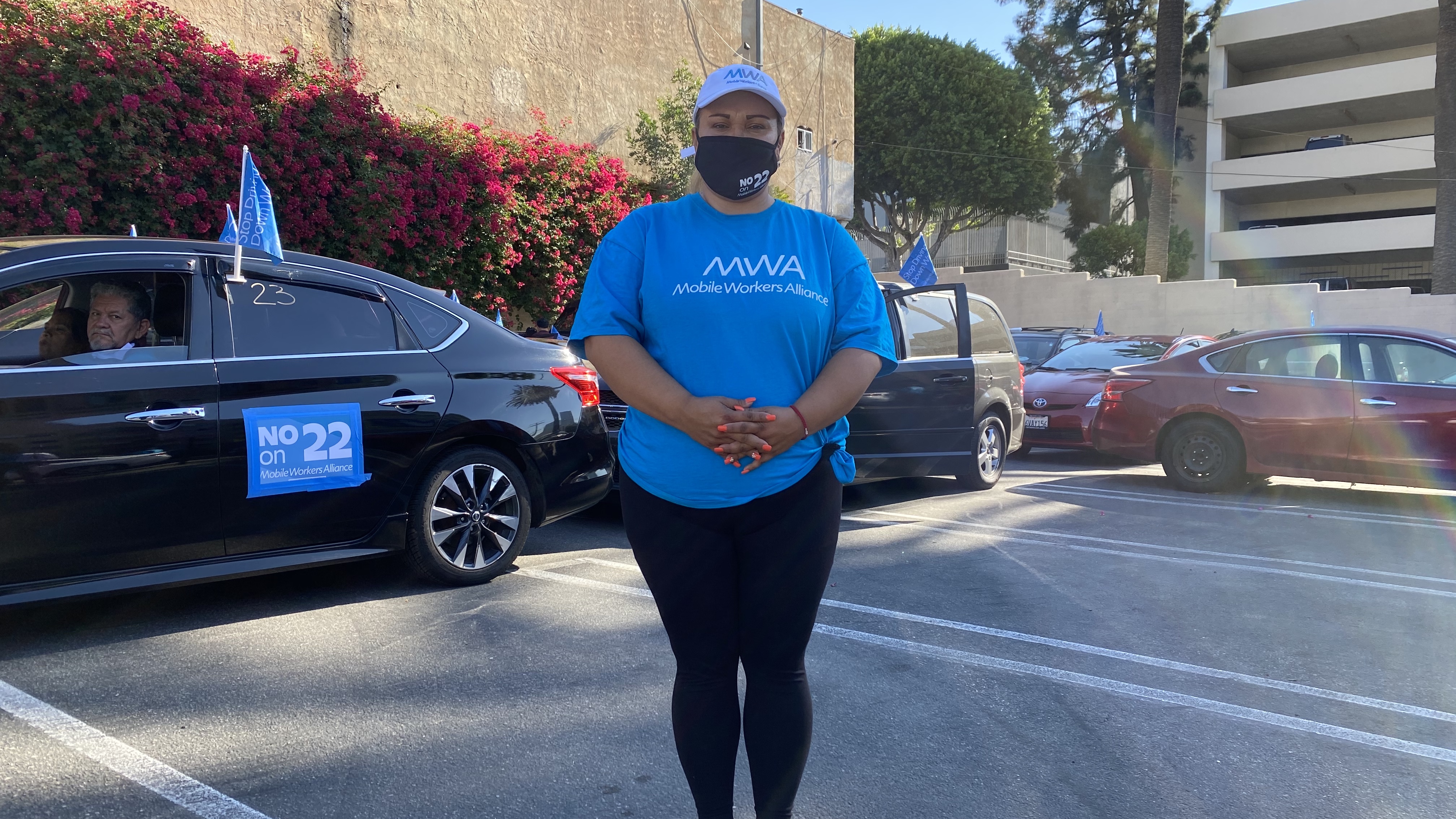 “We are fighting for above minimum wage and reimbursement for wear and tear on the car. And if they want to throw in benefits, that’s fine too,” said Danielle Torres. A part-time Uber driver from Pomona, she was caravanning to San Francisco with her husband, who drives full time for the ride-hailing giant.

Like a lot of Drive to the Ballot participants, Torres started to sour on Uber when she realized she was making less money the longer she drove. Many of the cars in the caravan were sporting signs that read, “Stop Driving Down Wages.” One of Wednesday’s speakers said her per-mile earnings had dropped from $1.20 when she started in 2015 to just 63 cents today. 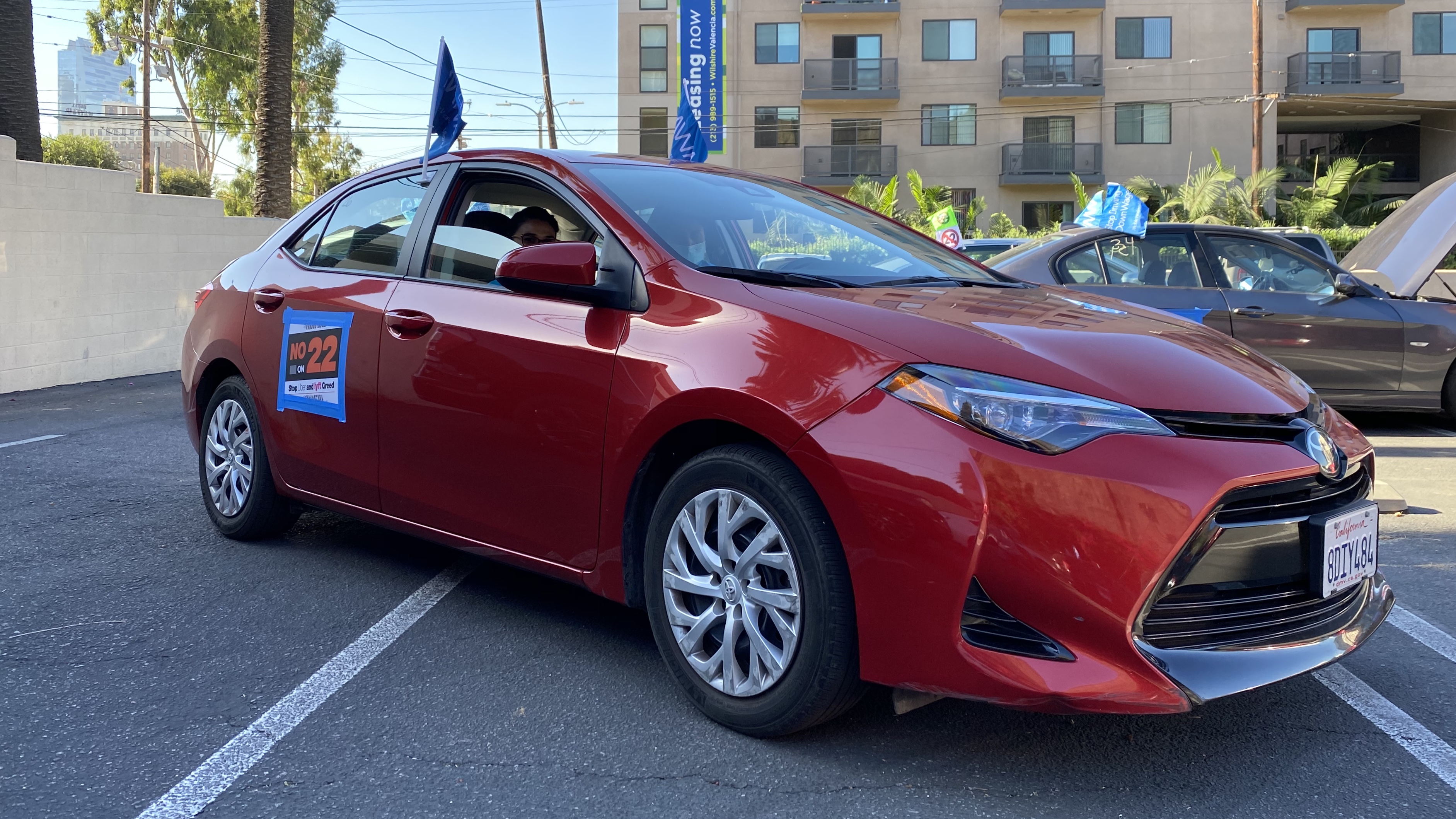 Driving 40 hours a week, “At first, you could get your weekly gross up to about $1,000,” said Keith Eberl, a member of Rideshare Drivers United who has been providing rides through Uber and Lyft since 2016 and has the odometer reading to prove it. He’s racked up 215,000 miles on his Ford Fusion Energi. To make the same money now, he said, he’d need to work at least 60 hours a week.

Caravan participant James Wiest had been driving for Uber, Lyft, and Postmates for about five years but had to stop because his car died. On Wednesday, he was driving a rental all the way up to San Francisco to show up on Uber’s doorstep “and demand that these gig companies pay their fair share to us, the benefits we’re entitled to in the state of California.” 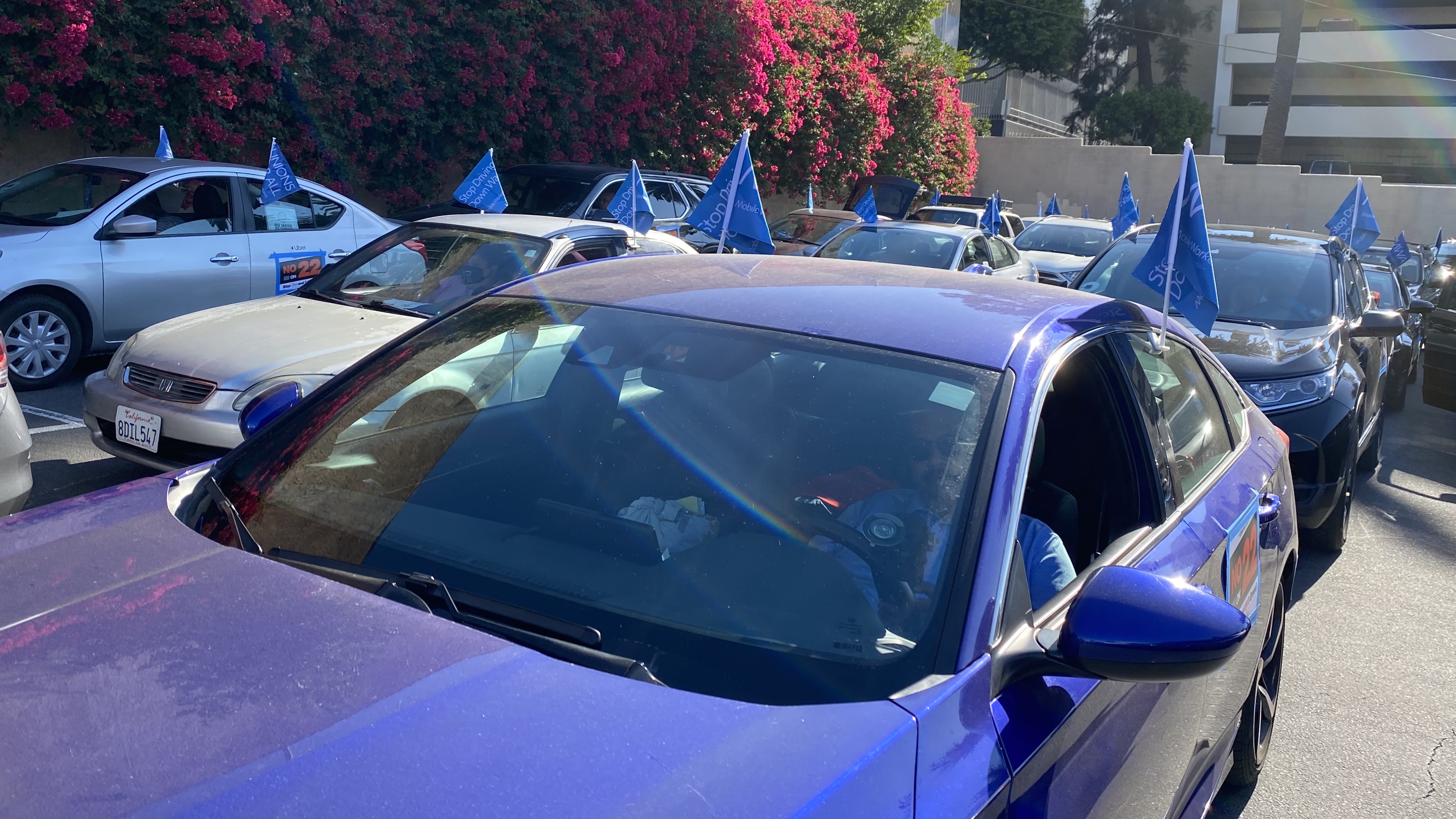 “The most we can expect is that they call the cops on us because it’s like we don’t exist,” he said.

Prop 22 is sponsored by Uber, Lyft, and DoorDash, which have collectively spent more to get it passed than any other proposition in California history: $185 million. 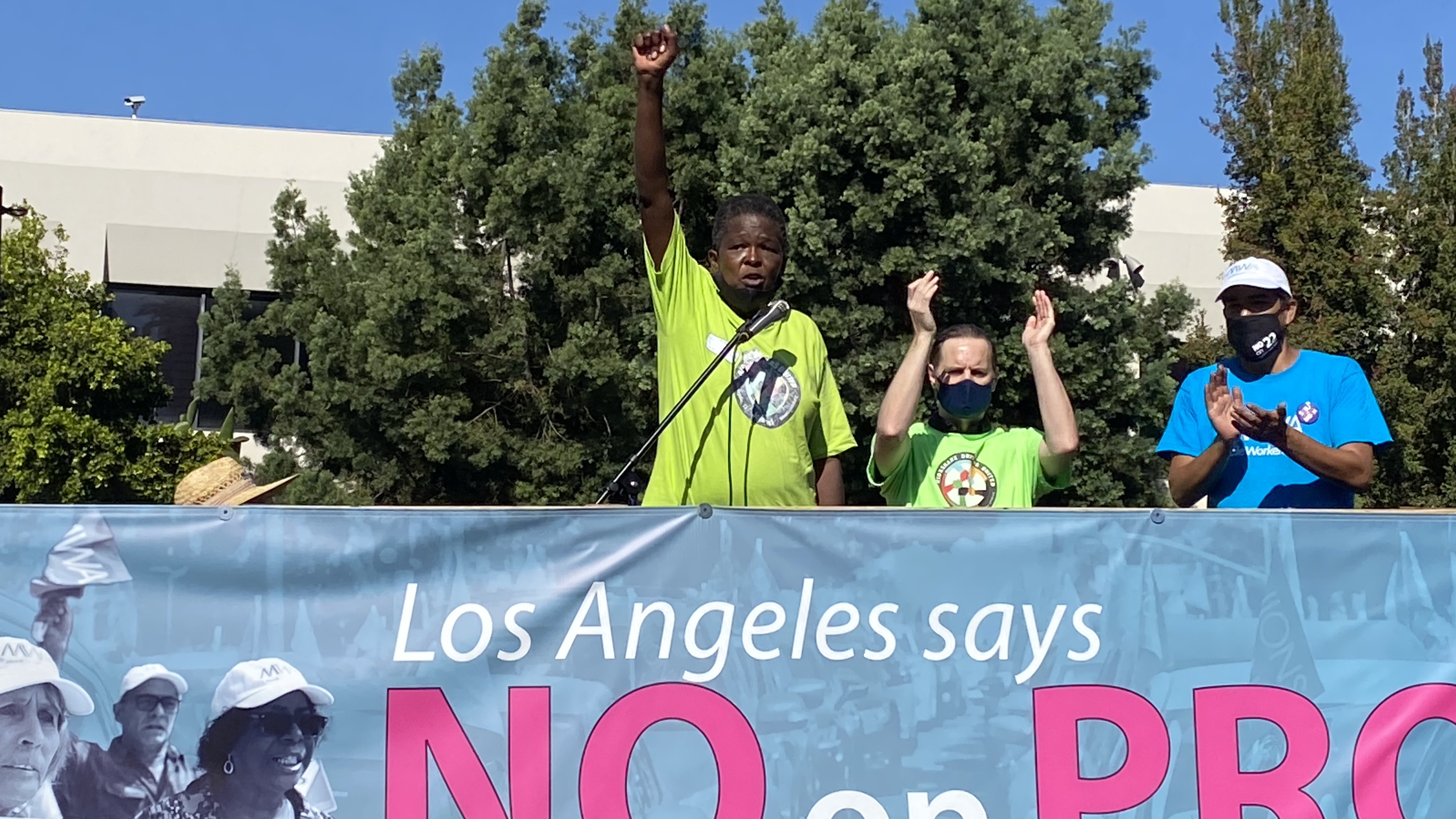 Wedbush Securities estimates it will cost Uber $500 million and Lyft $200 million per year to comply with AB5, the California law that took effect Jan. 1 and extends employee classification status to gig workers. But Uber, Lyft, and DoorDash have so far failed to do so. Instead, they are offering up Prop 22, which supports a minimum wage and some health benefits for drivers but would keep them as independent contractors.

According to researchers at the University of California-Berkeley Labor Center, Proposition 22 is intended to give drivers more protections while allowing Uber and Lyft to minimize labor costs, but it will only guarantee drivers $5.64 per hour, not $15.60 per hour, as Prop 22 claims.

Proponents of Prop 22 say app-based drivers prefer to be independent contractors by a four-to-one margin. But a 2018 study of ride-hail drivers in LA County from the UCLA Institute for Research on Labor and Employment indicated a preference for the employee status provided through AB5.

“We’re struggling out here,” said Elizabeth Roman, a single mom from El Puente who drives the graveyard shift for Uber and Lyft. She was driving a rented Ford Expedition for the caravan because the car she drives for a living “is messed up,” she said.

“We’re going all the way to San Francisco to protest in front of Uber so they can hear us that we are in desperate need of Prop 22 not to pass.”