SANTA MONICA, Calif. — When Angelenos commute to work, they're usually the only person in the vehicle. About 90 percent of people who travel by car, truck, van, or motorcycle drive alone, according to the U.S. Census Bureau.

But a new kind of car just arrived in Los Angeles with the goal of helping commuters think small. The SOLO, as it’s called, seats only one person.

“Why have three or four empty seats in a vehicle?” asked Paul Rivera, chief executive of the SOLO’s manufacturer, ElectraMeccanica, based in Vancouver, British Columbia. “Think of all the things you do by yourself. You go to the gym, get bagels, get your groceries. There’s so many things you do in a vehicle that is sized for the maximum number of passengers when most of the time you’re not using it.” 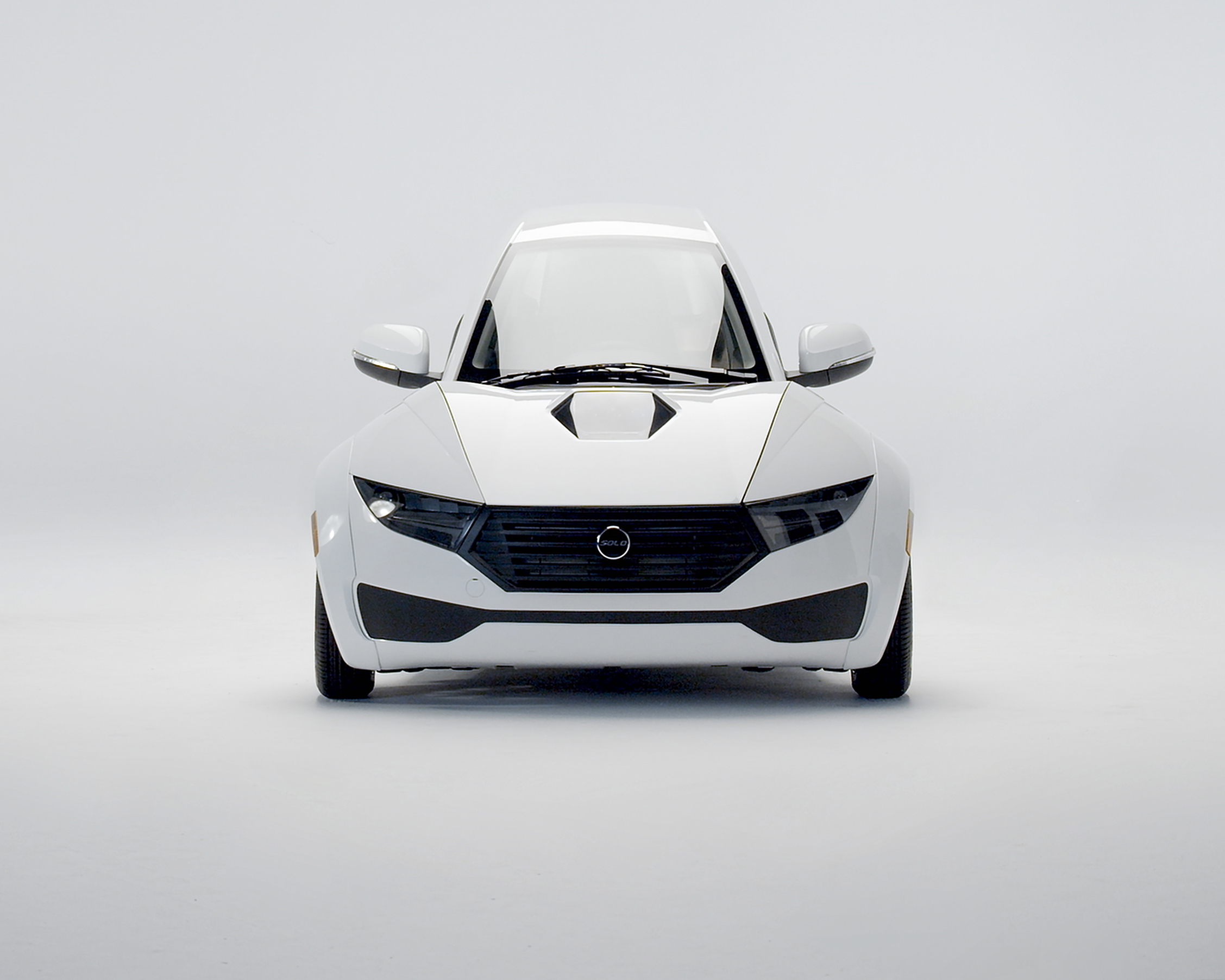 With two doors, three wheels, and batteries that drive it to a top speed of 80 miles per hour, with 100 miles of range per charge, the tiny electric vehicle is targeting L.A. and its seemingly intractable traffic problem, clogged as it is with SUVs and pickup trucks and delivery vans. Los Angeles is ElectraMeccanica’s first and only market at the moment, though the company plans to expand to the rest of the country within two years.

Taking up just a quarter of the space of a typical SUV, it looks like a car from the front, with the usual grille and headlights. Take a look from the back, however, and it tapers to just one wheel. 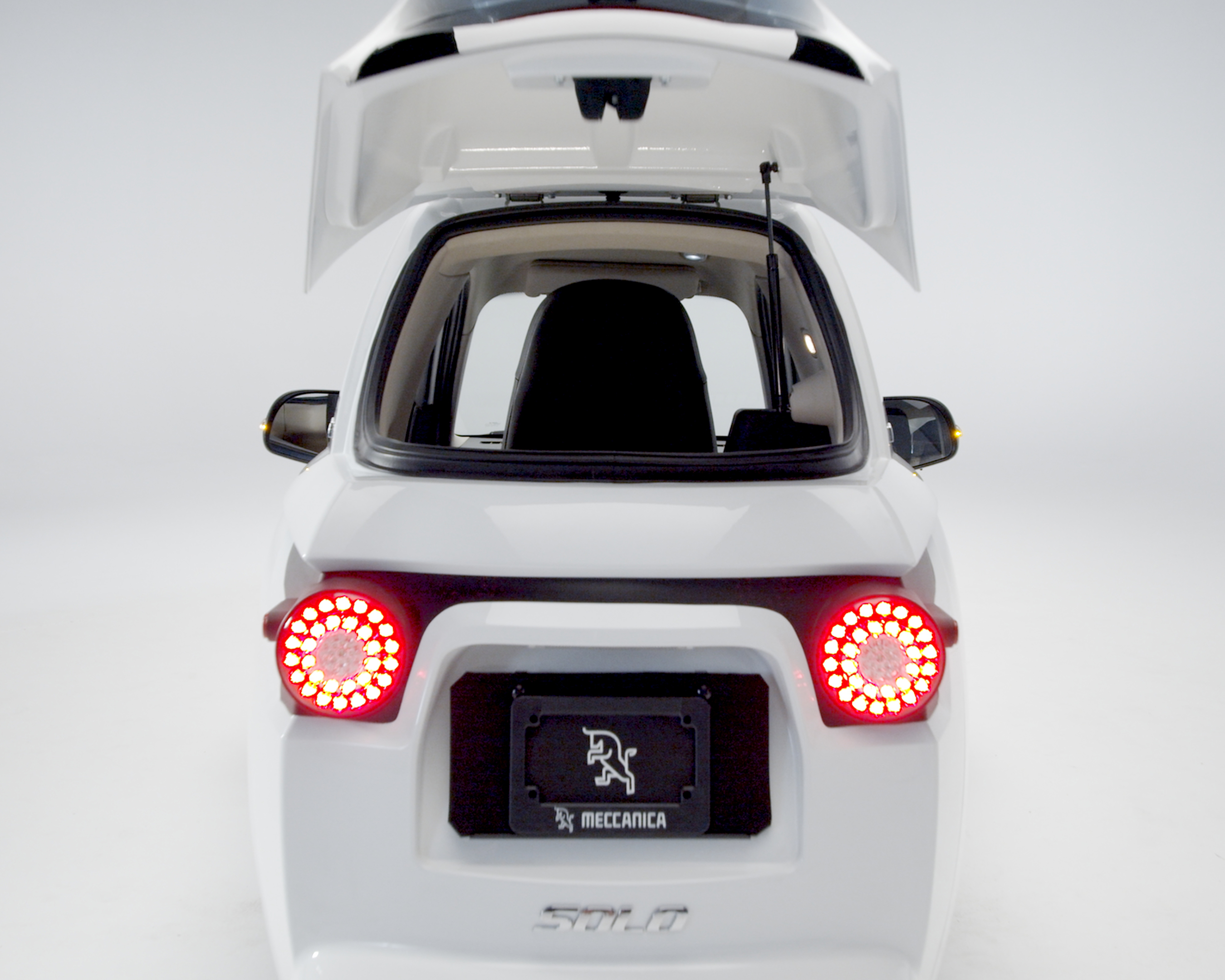 Technically, the SOLO is a fully enclosed motorcycle, which is how it's registered and insured in California. Drivers do not need a motorcycle license, however. The SOLO operates like a car, with foot pedals for the brakes and accelerator, as well as a steering wheel. The wheel is just centered in the middle of the dash because there's only one seat. And there are two doors to enable access from either side, along with the usual creature comforts of air conditioning, heated seats, a stereo, Bluetooth, a back-up camera – even a trunk.

The motorcycle classification means the SOLO isn't subject to the same rigorous crash-testing as a traditional passenger vehicle. To compensate, the company has added multiple features to enhance its safety, including a seatbelt; roll bar; triple side impact protection at the shoulder, knee and foot; and torque-limited stability control for the rear wheel. 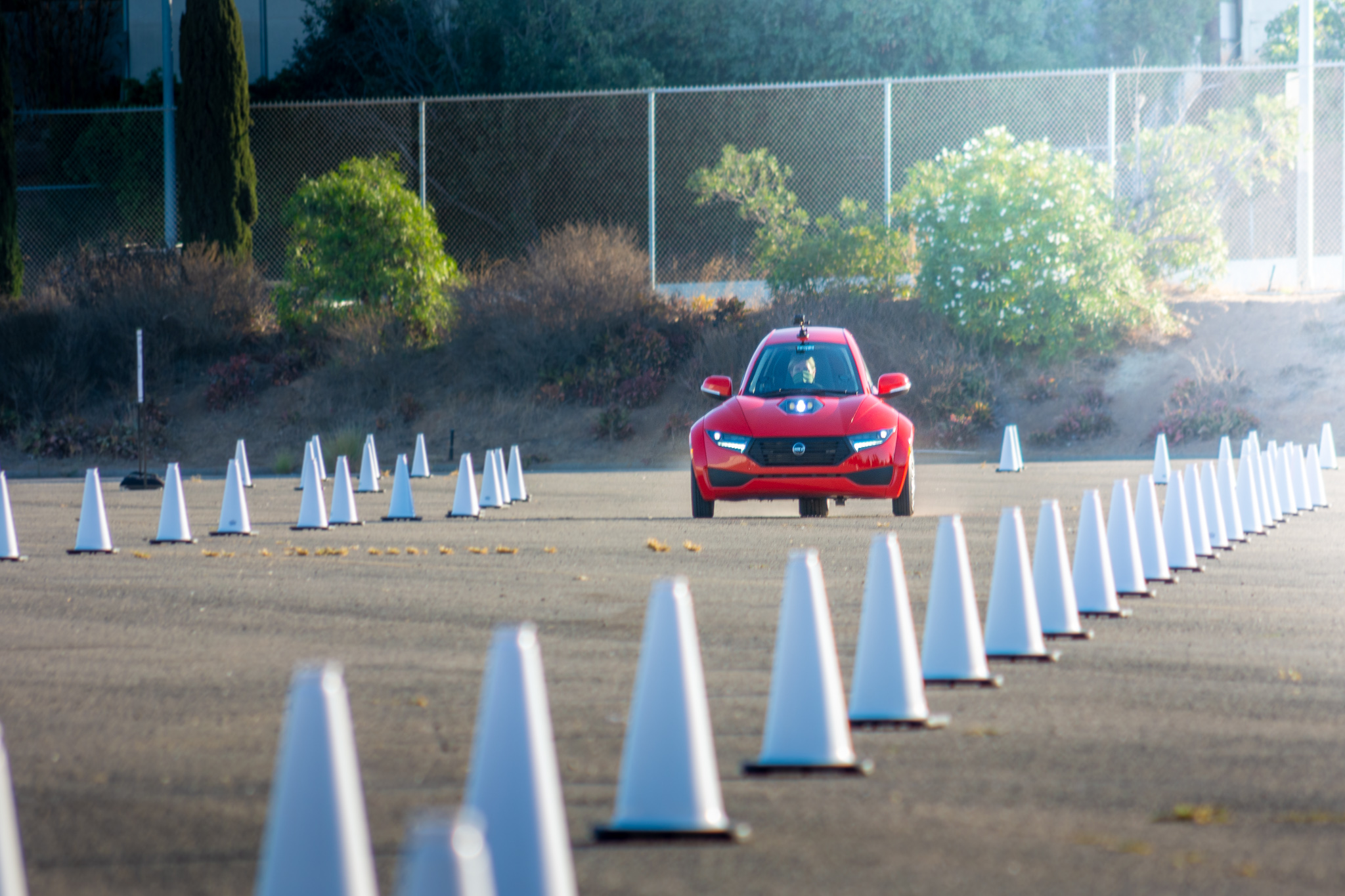 Driving it on a coned course at Santa Monica Airport this week, the SOLO handled pretty much as expected. For a car so small, it didn’t feel at all cramped. In fact, the seating area was surprisingly spacious and comfortable. Sashaying around the cones from stop sign to stop sign, I didn’t at all miss having more car around me. That said, I wasn’t in traffic. I suspect that driving the SOLO on the 405, the view from the side windows would be mostly hub cap.

Low slung like a sports car, an SUV it is not. Having such a petite profile, and with only a single wheel out back serving as a sort of pivot, the turning radius was impressive. The acceleration, unfortunately, was not. For an electric vehicle, the SOLO wasn’t as gleefully quick as many of the other, more mainstream zero-emissions vehicles on the market, but it was smooth. 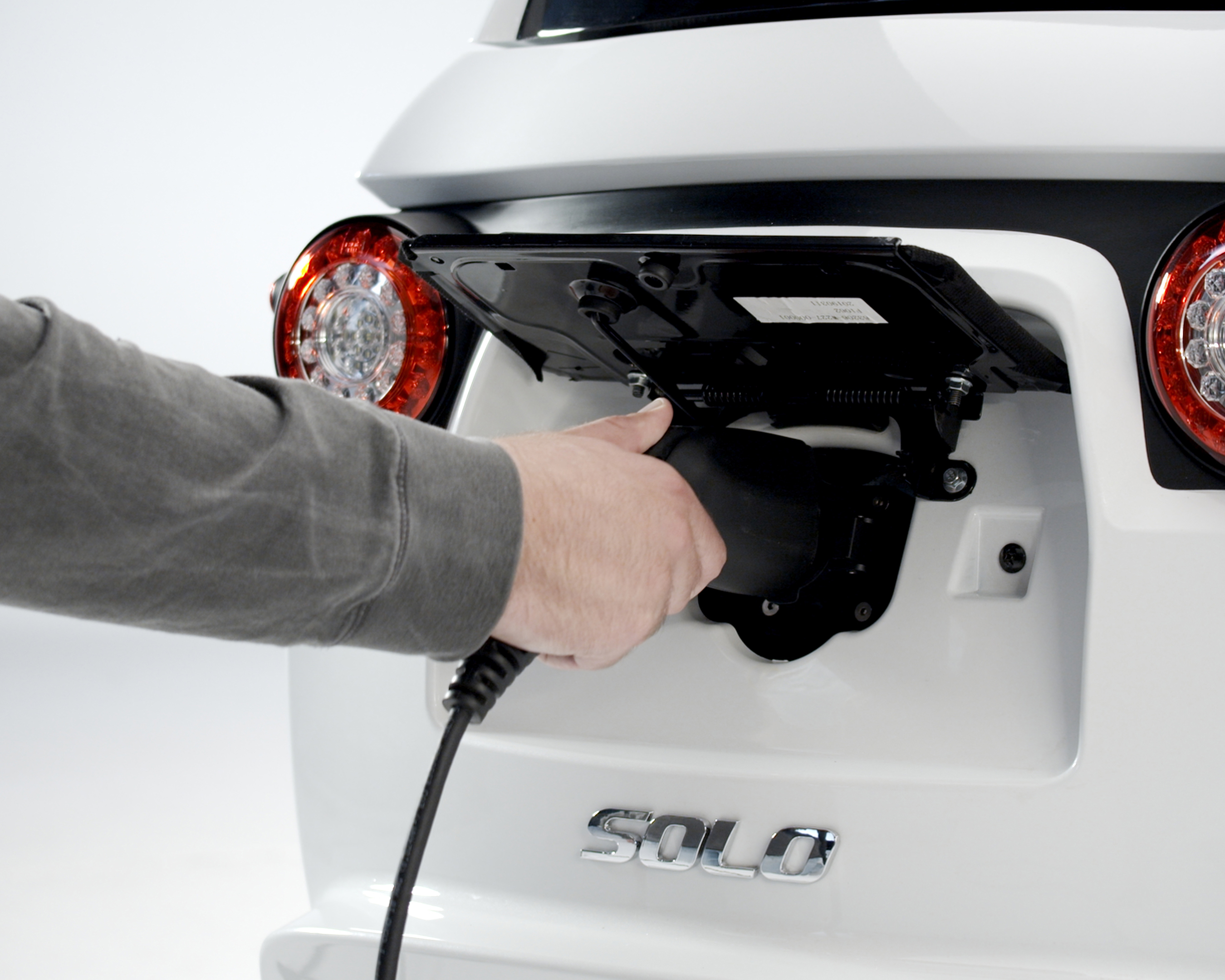 Overall, the SOLO's driving experience was not as refined as a traditional, four-wheeled passenger vehicle from a mainstream automaker, though the fit and finish were exceptional for its upfront cost. Priced at $18,500, the SOLO is inexpensive for a new battery electric vehicle and cost-competitive with used. 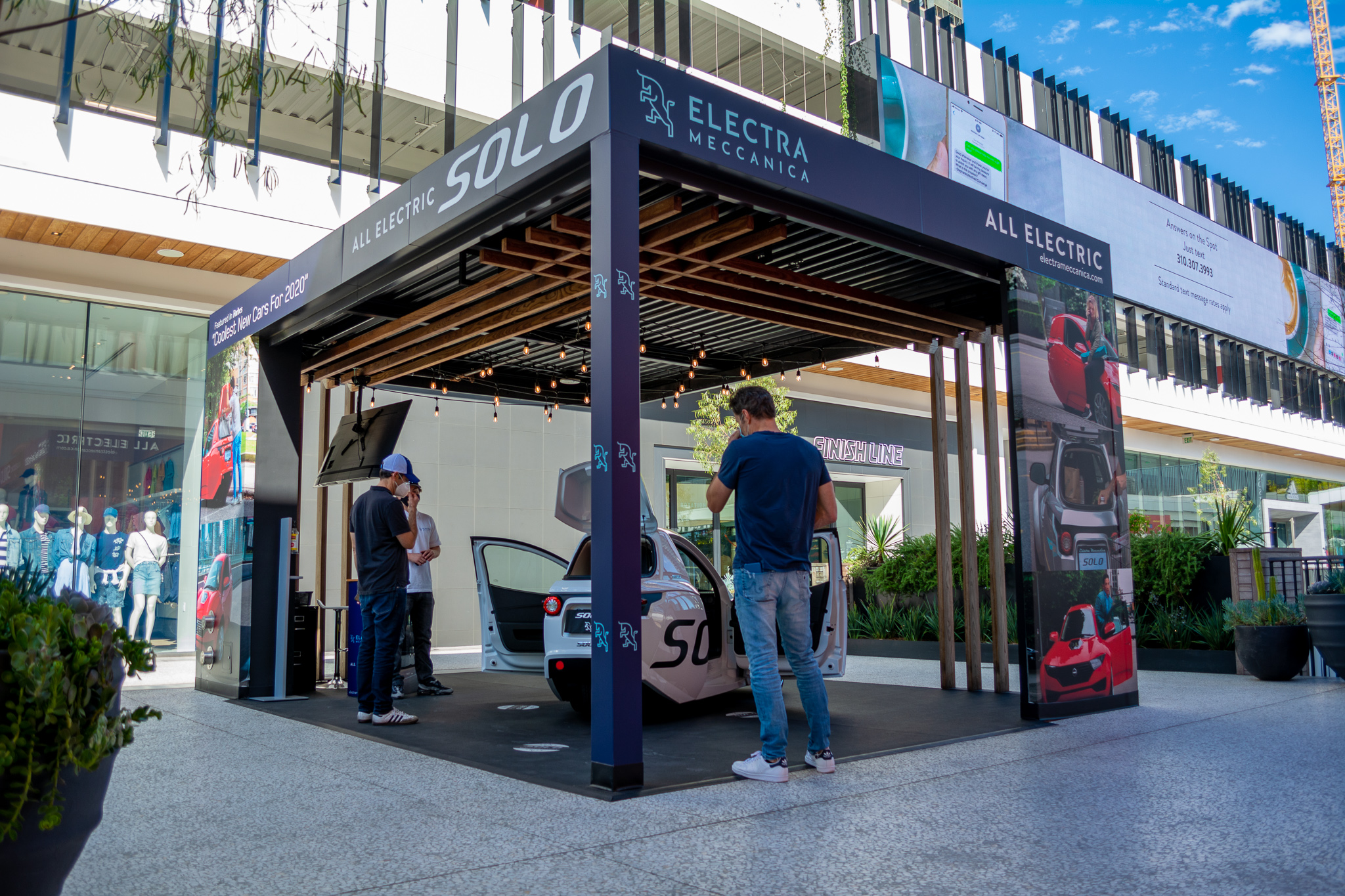 Similar to Tesla, the SOLO is not available through dealerships. ElectraMeccanica is selling them online and through shopping mall kiosks. It is currently on display at the Westfield Century City mall and will soon set up shop at Westfield Fashion Square in the San Fernando Valley.

“It looks really cute,” said Ghazala Azaz, who was shopping at the Westfield Century City mall with her husband recently. She was heading toward a shoe store when she saw the SOLO and stopped inside the kiosk to check it out. “It’s very innovative,” she said. “I think that it’s great for the future, and the size of it is really good.”

ElectraMeccanica dates back to the 1960s, and an Italian firm that built replica Porsches. After that company relocated to Canada in the 1990s, it spun off the ElectraMeccanica subsidiary in 2015. Over the past five years, the company has created two earlier versions of the SOLO that were manufactured in very limited quantities, some of which are still being driven in Canada.

The newest version of the SOLO is manufactured in China, in partnership with the motorcycle maker Zongshen Industrial Group. ElectraMeccanica plans to set up a North American assembly facility within the next two years. 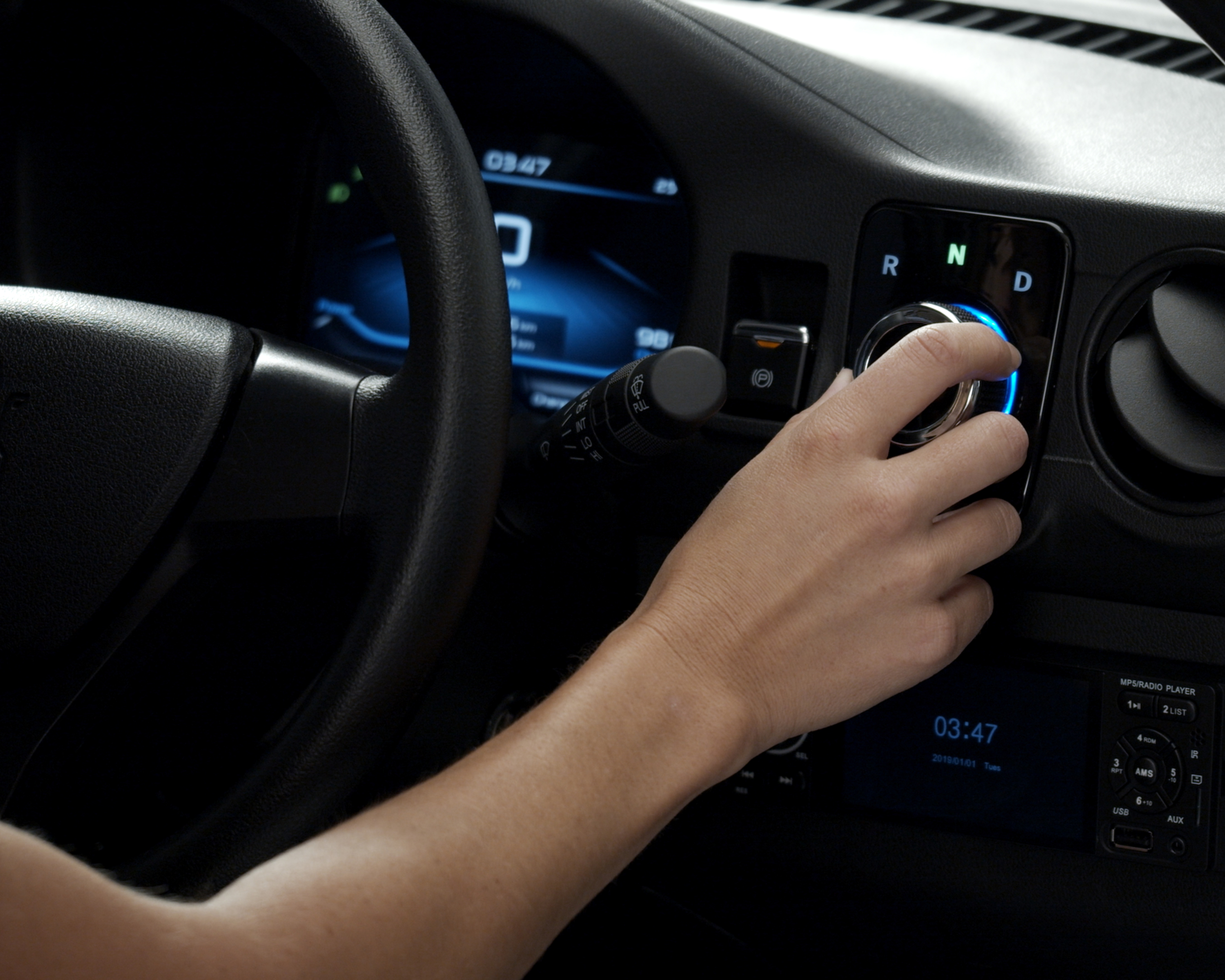 California is the largest market for electric vehicles in the country — where traffic is bad and getting worse, and air pollution is a chronic problem. ElectraMeccanica is betting that EVs will only become more prevalent, following Gov. Gavin Newsom’s recent executive order mandating that 100 percent of all new passenger vehicles sold in the state be electric by 2035.

“We feel like it validates our business plan,” Rivera said.

The first two SOLOs arrived in Los Angeles just last week. The first SOLOs going to the customers who pre-ordered them will land stateside before the end of the year.

Rivera declined to say how many SOLOs have been pre-sold at this point, other than to say “we have a long list. We’re just excited that the vehicles are finally coming across so we can start to deliver them to the people who’ve been waiting.”