LADOT plans to overhaul the city’s taxi system with Prop. 22, enabling passengers to summon a ride with an app and know the price of their rides before getting into the car. (AP Photo/Jae C. Hong,File)

LOS ANGELES — It was with little fanfare last year that the Los Angeles Department of Transportation announced it would overhaul the city’s taxi system in 2020, enabling passengers to summon a ride with an app and know the price of their rides before getting into the car.

The move was designed to make L.A.’s taxis more competitive with Uber and Lyft, which have claimed the lion’s share of for-hire, on-demand transportation since they came to town eight years ago.

Now that the taxi overhaul is poised to take effect, there is a new urgency, as voters head to the polls to determine the fate of Prop. 22, and whether ride-hail companies will be able to continue their practice of treating drivers as independent contractors.

Backed by Uber and Lyft, the proposition will not only determine the employment status of thousands of drivers, it could result in the companies following through on their threats to leave the state entirely if it fails.

“Should Uber and Lyft bow out of California, or Los Angeles in particular, we’ll have something that can fill the vacuum as much as possible with an easier, seamless transition for the actual customer,” said Jarvis Murray, for-hire transportation administrator for the Los Angeles Department of Transportation. “Even if Prop. 22 passes, the goal is to streamline taxis and make them a more viable alternative for the average customer.”

Among the most significant changes to the system: lifting the cap on the number of taxis that can operate in the city. For 30 years, LADOT has allowed just nine taxi companies to operate with a total of 2,300 vehicles available to serve 4 million residents over a geographic area of 500 square miles. Under the new rules, they will be able to operate as many vehicles as the market will bear, which could be significant. Analysts estimate there are as many as 100,000 Lyft and Uber drivers in the city.

“We’re anticipating that if Prop. 22 gets a 'no' vote and Uber and Lyft decide to leave, we may have a lot of people out of work. To fill that vacuum, maybe they become taxi drivers,” Murray said. “They’ve been doing the work. They’re used to it. If they have a 2017 Prius and they brought it to a taxi company, they could begin work seamlessly.”

Under the new rules, taxis would no longer need to be garish shades of green, blue, or purple, which had been required under the old taxi rules. They would simply require a decal identifying them as a cab.

To fast track the necessary changes, the Los Angeles Taxi Commission plans to meet twice as often to hammer out the new rules, with the goal of having them in place by Election Day.

“By Nov. 3, I would like L.A. taxi companies to be able to on board enough drivers to meet the demand that is currently served by Uber and Lyft, and I would like there to be a means for passengers to easily call a taxi in the same way they call an Uber and Lyft,” said Eric Spiegelman, president of the L.A. Taxi Commission.

“At the same time, we need to balance all those interests against 50 years of city interests, such as serving formerly redlined neighborhoods equally, serving people in wheelchairs equally, and making sure that the customer experience is pleasant,” he said.

A key part of a pleasant customer experience is an app that works in a manner similar to what Uber and Lyft customers have become accustomed to – one that lets them summon a ride with the press of a button, track their driver, and know the price of their trip upfront.

Many cab companies have their own apps, but they work only for that individual fleet of a few hundred cars, and that fleet might not operate in the area where a customer needs a ride.

Under the new taxi rules, an app would “dispatch rides and be able to reach every driver who drives a taxi in L.A.,” Murray said. “You’d get the closest drivers, and be closer to Uber and Lyft in terms of size and volume and the ability to saturate the market.”

While an earlier version of the taxi overhaul called for a centralized dispatch system that would be run by the city and connect all of its taxis, the most recent version would allow a third-party app developer to provide that service. 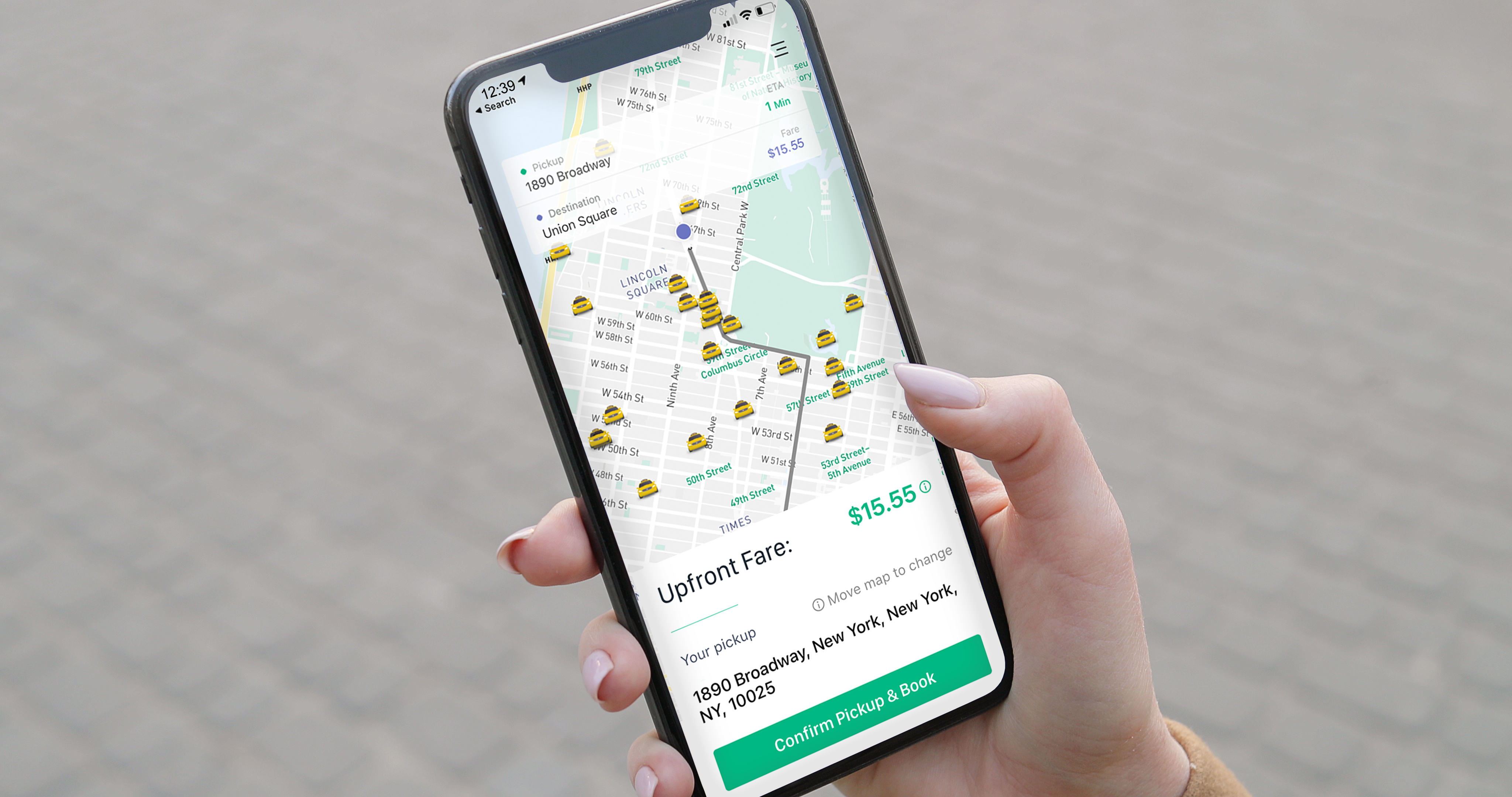 One such app is Curb. Much like the better-known Uber and Lyft apps, it allows for e-hailing, ride tracking, contactless payments, and, as of this month, upfront fares. Its biggest current market is New York City, where the app powers upwards of one million rides per month, said Jason Gross, vice president of mobile for New York-based Curb.

“Just like Uber and Lyft are brands, taxi is the brand that Curb has attached itself to,” Gross said. “Curb will allow you to get a taxi, and if you want to get a taxi, use Curb.”

Curb is not the only taxi app to begin offering upfront pricing in an effort to be more transparent about pricing than traditional meters that charge by distance and time.

“We’re going to take the taxi meter out of the equation,” said William Rouse, general manager at Yellow Cab of Los Angeles. “That’s something we’ve been working on for quite a long time, and we are just about to implement it.”

Oct. 15 is the date, shortly before many of the city-wide taxi changes are likely to take place.

All of the city’s new taxi rules “are meant to address a particular weakness that their industry has vis-à-vis our competition, and one of the weaknesses is the meter,” Rouse said.

For years, Rouse thought the meter provided transparency to passengers. But through focus groups, the company learned that passengers actually “hate the meter clicking away,” Rouse said. “It makes them anxious and wonder if the driver is taking the long way around or if they’re being cheated.”

Rouse is largely supportive of the changes LADOT is making to the taxi system. He and many of L.A.’s other cab companies have been lobbying for them for years, he said, including a streamlined process for onboarding drivers.

Earlier this month, one of the first pieces of the new taxi system went live: an online permitting portal for taxi and for-hire service providers to do all the permitting and background check processes remotely. Rouse said it’s too early to tell how beneficial that change will be, but he said taxis have been at a disadvantage compared with Uber and Lyft, which can get drivers signed up and on the road within 24 hours, compared with two weeks for a taxi driver.

Increasing the number of vehicles a taxi company can operate, streamlining the permitting process, allowing for upfront pricing, and doing away with cab colors, “These rules could definitely turn things around for us,” Rouse said.

“We feel like we have a valuable proposition,” he added. “There are some customers who prefer a more professional driver, knowing there’s insurance on the vehicle. If we’re able to grow the fleet enough by adding Uber and Lyft drivers, that makes our product more reliable and our service response times faster, and if the city will facilitate that sort of stuff, there’s a lot of opportunity.”