LOS ANGELES — If there’s any silver lining to the pandemic, it may be that L.A.’s long-standing and dubious reputation as the traffic capital of the world got a reprieve. The number of vehicles on the road fell by more than half in early April after Mayor Eric Garcetti issued his safer-at-home order, but it’s creeping back.

Car volumes are now at 80 percent of normal and are expected to get back to full tilt – and beyond – as the economy recovers. We asked the Los Angeles Department of Transportation General Manager Seleta Reynolds to talk about the challenges the city faces in keeping traffic under control, and the role shared mobility platforms, such as on-demand scooters, bicycles, and cars, have to play going forward.

Do you think we’ll end up with the same bad traffic we had a year ago once the pandemic ends?

I’m pretty worried about that. Right before the pandemic, during the great toilet paper shortage of 2020, people were driving all over the place to hunt and gather essential supplies. What traffic was like in late February, early March was the worst-case scenario, but that is what we are in for as the economy returns if we do not figure out how to bring public transit, car sharing, and shared mobility back into people’s lives as their first choice. If they need to drive, they can, but I think it will hinder our economic recovery if we return to those pre-COVID levels of congestion. It’s really urgent to consider how we confront the rising levels of traffic, so it doesn't end up keeping us from rebounding as a regional economy. If the whole city and the region grind to a halt and can’t get where they need to go because people aren’t willing to get back on public transit or pursue different modes, it’s a lot of lost productivity and a huge drag on moving goods around the city. 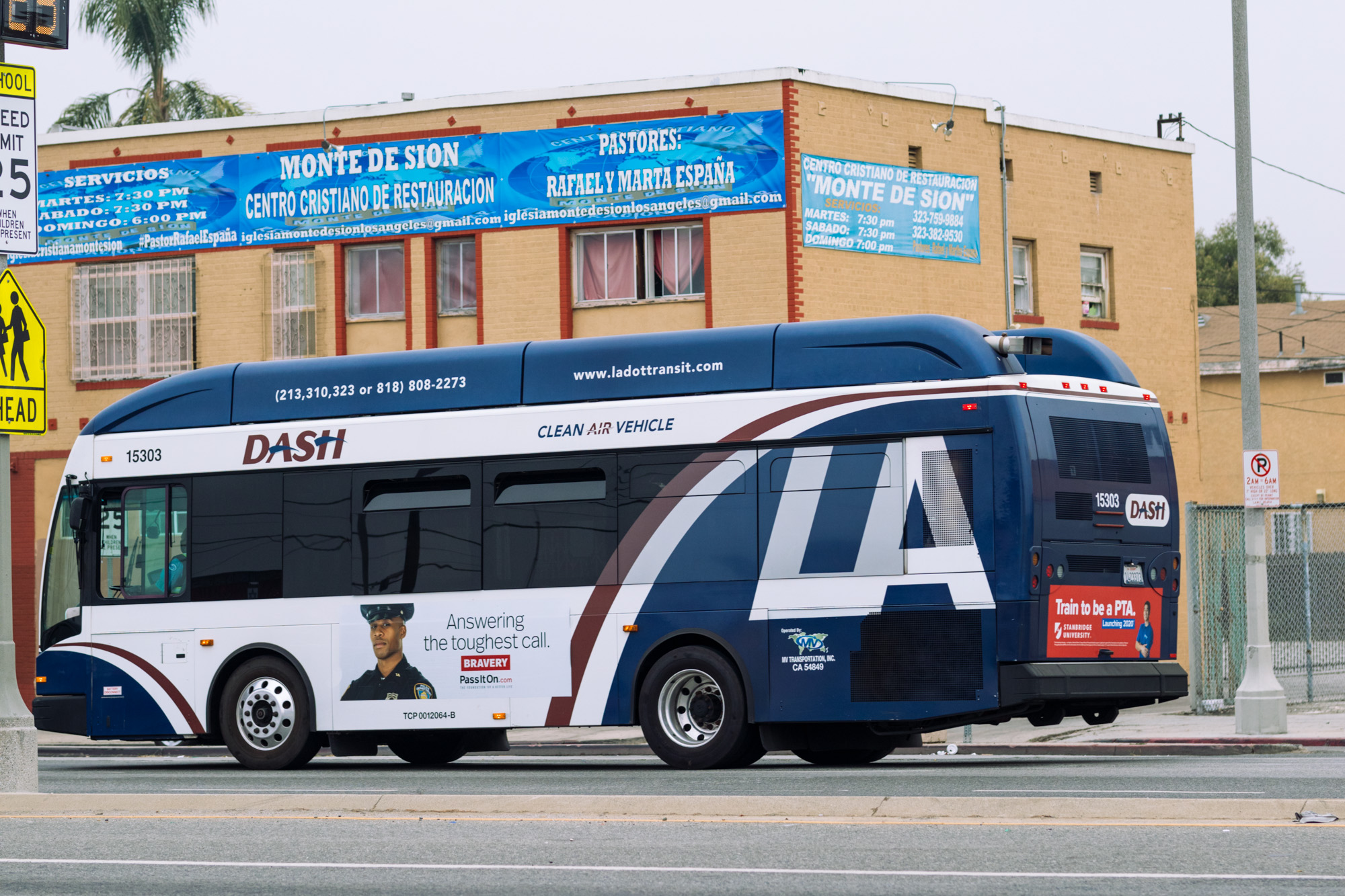 How do you get out ahead of that?

I really do think that giving people easy access to clean and electric cars when they need it in a way that’s so affordable and reliable that they don’t purchase a car, or a second or third car, has to be key. Infrastructure is really important. People need to feel safe when riding a bike or scooter and feel that same level of care and hospitality when on public transit. And then making sure the infrastructure honors the most efficient form of getting around town. Dedicated lanes for public transit is an essential part of the playbook for transportation’s return, so we’ve put in some bus-only lanes on 5th and 6th streets downtown, and we’re working with Metro to install those same kinds of treatments in other parts of the city.

What you’re talking about takes money. How has COVID affected LADOT funding for things like protected bike lanes and dedicated public transit lanes?

There’s a whole bunch of things going on right now that’s causing us to take a step back and reevaluate all our programs. A lot of transportation funding comes from sales tax or the SB1 gas tax. Those things rise and fall with the economy, which means funding for transportation rises and falls, so those dollars may experience some significant disruption because of the downturn in the economy. At the same time, the city is struggling with some extremely sobering budget realities, like separation incentives for employees who are eligible to retire. We’re doing that because we hope to avoid layoffs and furloughs, but that means you’ve just incentivized the most seasoned and experienced people in your organization to exit all at once, and you can not re-hire somebody. You have to hold that position vacant, and that will have a significant impact on infrastructure projects across the board. 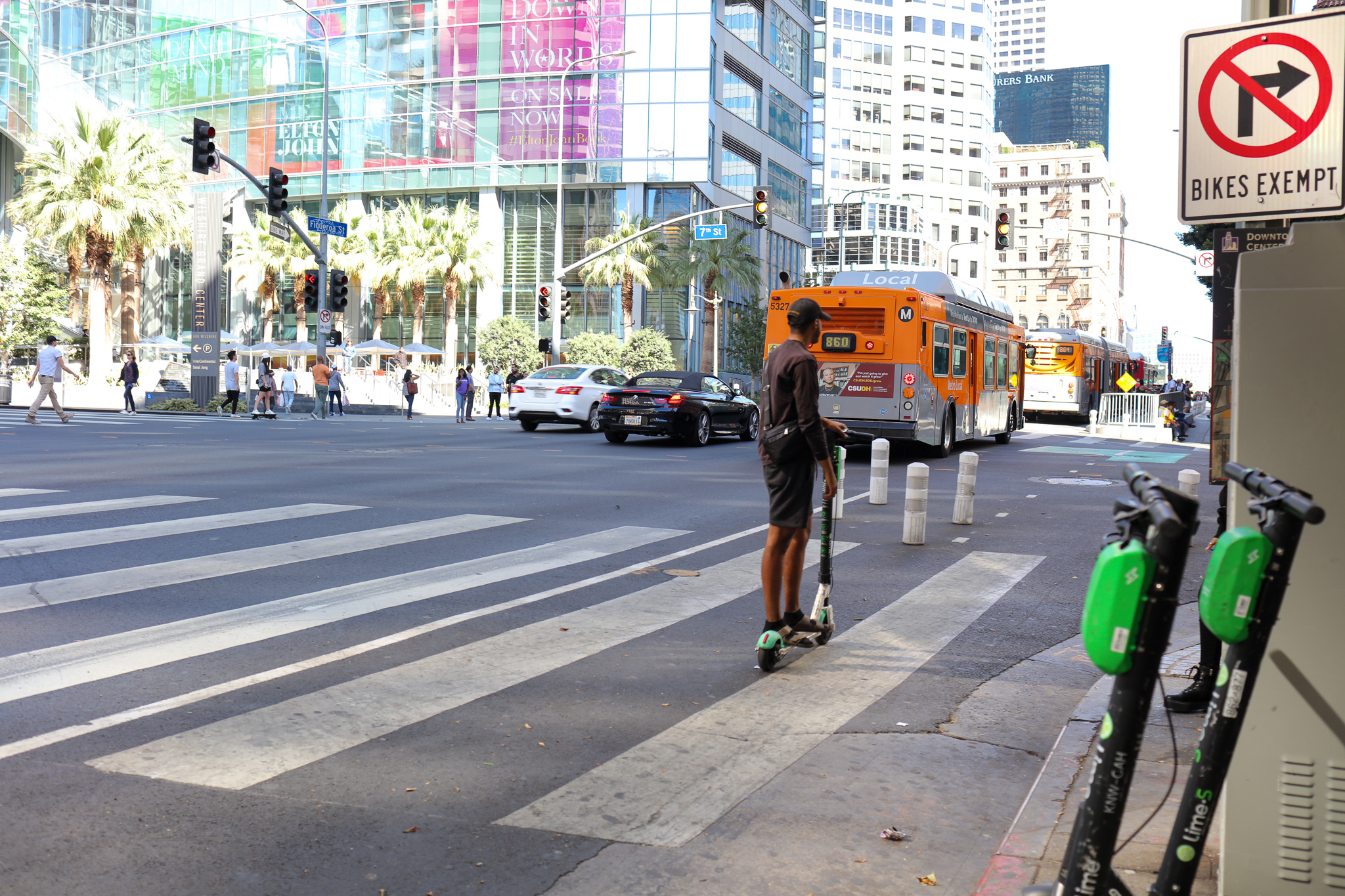 A year ago, Los Angeles was in the midst of the country’s largest on-demand scooter pilot program — a move LADOT embraced to provide affordable transportation and help alleviate traffic. What’s happening with that now?

A lot of companies withdrew from the market voluntarily at the beginning. At our peak, we had 36,000 registered scooters in the city, and at one point we were down to fewer than 900 on the street. Part of that was they had to figure out their cleaning protocols, but we have not seen them return to pre-COVID levels. Summer is supposed to be peak usage, but we’re seeing a lot fewer trips per day. We have six companies operating: Bird, Sherpa, Lime, Spin, Lyft, and Wheels. In January, we were seeing 529,000 trips per day, and here in July, they’re down to 225,000 daily trips.

Do you think people’s hesitation to touch what other people have touched will have a permanent effect on their willingness to use shared mobility, or do you think it’s temporary?

The main way a virus is passing from person to person is really about close contact and shared air, not about shared surfaces, so I think that is going to continue to reassure people that they can come back and use these devices to get around. However, I'll say that what we know about people’s mode choices is that reliability is really critical. Metro Bike Share was in L.A. for a year before we saw ridership start to climb, and that’s because people need to feel assured that this is reliable, they can make choices based on it, they can switch their mode. So if you’ve got a mode like scooters that was available everywhere, and then almost overnight it was available nowhere, it will take a while after they come back for people to feel confident they can start using them. 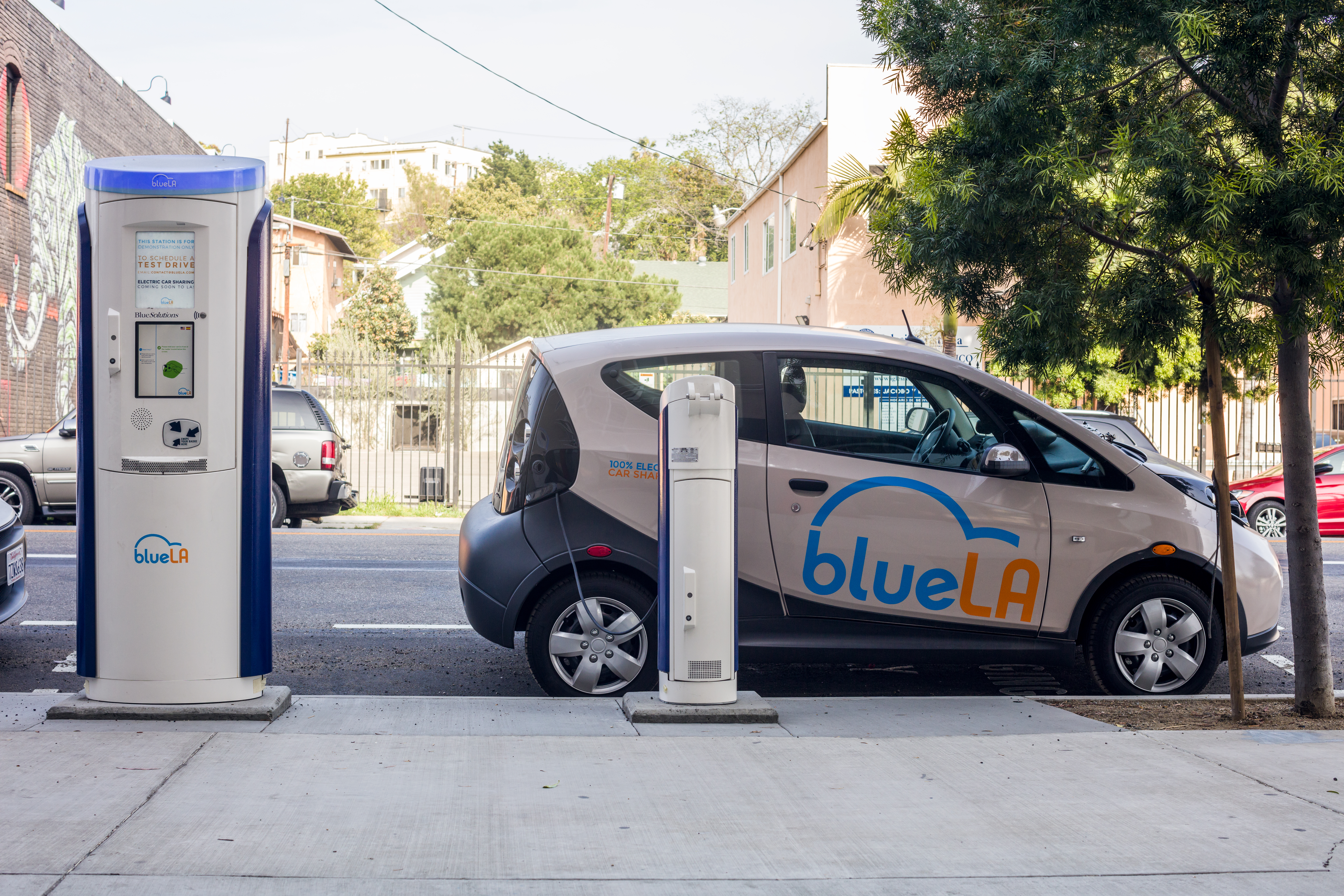 L.A. has also been a big proponent of on-demand car shares, like Blue L.A., which lets people rent electric cars by the minute. But one of the biggest players here, General Motors’ Maven, permanently stopped operating this spring because of COVID. Does car sharing have a future here?

We have Blue L.A., but they pulled back their operations at the beginning of the pandemic. We were able to get them back up and running, and last week we had 500 trips on Blue L.A., so people are still using it. But I am not confident that without a different kind of operating model or additional investment that BLue L.A. is really going to be able to stay in the market long term. In fact, the parent company said they plan to potentially exit all car-sharing markets by the end of the year. Maven and Car2Go have come and gone. It’s been a tough last few years for car-sharing [services] in general. Part of that is attributable to Uber and Lyft coming on the scene as competition for the same kinds of trips people were using car shares for, but part of it is just that it’s really hard to make money in transportation, and car sharing is no exception.

Despite the business challenges, do you still think car sharing provides a valuable service, especially in lower-income communities?

In L.A. and a lot of American cities, it’s difficult to get everything done that you need to do by transit. There are lots of people who can not own a car or don’t have access to a car when they need it, so we need to figure out a way for everybody to have access to clean and reliable and affordable cars. The pickle we’ve gotten ourselves into in the U.S. is that we’ve never been able to disentangle auto access and auto ownership. Being able to own a car is essential to economic mobility. Our opportunity is to make a policy argument that in places that are mobility deserts in L.A., with infrequent transit access, we must consider car sharing as an extension of true public transit that we fund with public dollars.

A lot of transportation analysts are predicting an increase in personal car usage post-COVID because people don’t want to share space. Is that your expectation?

It’s hard to forecast what a new normal is going to look like because of the economic downturn. We know that when that happens, overall levels of driving and moving around by any means drops pretty precipitously, so it’s possible that we’ll just see an overall shrinking of people moving around at all. L.A. is one of those cities where most of the people on Metro or LADOT transit tend to be low and very low income. About half of the people on our buses make less than $20,000 a year. A lot of these folks don’t have access to a personal car, so even if they wanted to, they’re not able to.

This interview has been edited for brevity.