LA's traffic management system was upgraded and moved to a new headquarters in advance of the 2028 Olympic Games. (Spectrum News 1/Susan Carpenter)

LOS ANGELES — The 2028 Olympic and Paralympic Games are still six years away, but Los Angeles city officials are already laying the groundwork to help smooth traffic.

On Wednesday, the Los Angeles Department of Transportation and members of the Los Angeles Olympics organizing committee, LA28, cut the ribbon on the city’s new Automatic Traffic Surveillance and Control headquarters.

An acronym that formerly stood for Automatic Traffic Surveillance and Control, ATSAC now stands for Advanced Transportation System and Coordination, Los Angeles Department of Transportation general manager Connie Llanos said. The renaming reflects the system’s first major expansion since the last time it was overhauled in 1994.

“Ingress and egress become your first impression and last impression, so how and what we do to make people’s ability to get to and from venues and for the athletes to arrive on time become critical parts of the delivery of the Games,” LA28 chief executive Kathy Carter said at the ATSAC unveiling.

Formerly in a converted nuclear bomb shelter in the bowels of City Hall, the new headquarters are now on an upper floor of the CalTrans building in downtown LA. The new space reflects an expansion of the system’s capabilities to not only manage the flow of cars but coordinate with buses, trains and bike signals.

Los Angeles first implemented its ATSAC system to manage the flow of goods and people during the 1984 Olympic Games. In 1984, the system was able to control 118 traffic signals. It now manages 4,850.

ATSAC works with a system of wires and fiber optics that connect those signals to the traffic control center, which processes data about vehicles and people arriving from different directions and modifies signal timing to help traffic flow. If the system senses a bus is running behind schedule, for example, ATSAC is able to provide an early green light or extend the light a little longer to help it catch up. 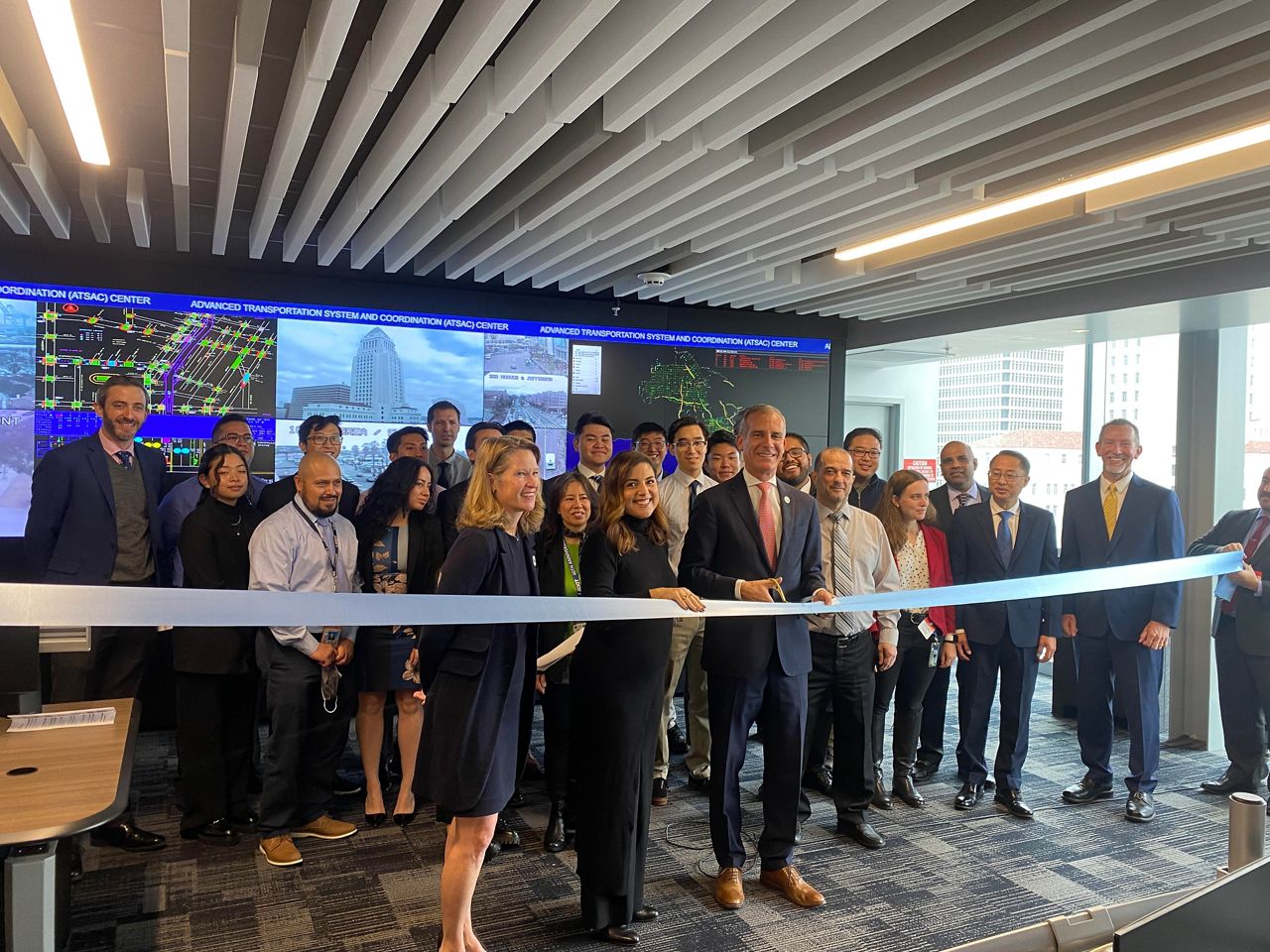 Recognizing the many forms of mobility Angelenos use to navigate the city, the updated system manages 1,500 intersections that control transit priority, 1,300 signals that control pedestrian priority and a growing number of bicycle signals, she said.

In its updated form, ATSAC will “ensure that all of our traffic engineers can better coordinate with our electricians, our traffic officers, our transit operators both within LADOT and regionally as well as with emergency responders,” Llanos said.

The system has an increased number of remote-control sites that will allow greater flexibility in case of an emergency. The space itself is also larger to help LADOT coordinate with different agencies during major events.

Carter pointed to the city’s successful management of recent major sporting events, such as the Super Bowl earlier this year and, in July, a Major League Baseball game, Major League Soccer cup and University of Southern California homecoming all on the same day.

For the 2028 Olympic and Paralympic games, she said, ATSAC will be especially important to manage traffic around the city’s Olympic venues and the mobility hubs where athletes will be staged before being transported to their events.

Carter said LA28 intends for people to drive to the mobility hubs and then use public transportation or dedicated bus systems to get them to and from their destinations. Similar to the Super Bowl, “there will be education that will occur with that to make sure that athletes arrive on time and fans have a seamless experience,” she said.

“We are just at the beginning stages of our planning for what we’ll do to move people around Los Angeles, and our incredible partnership with the LA Department of Transportation, Metro and CalTrans is really the backbone of what will make our games incredibly successful,” Carter said.

The 2028 Olympic Games are the third time Los Angeles plays host to the international sports competition and its first time as the venue for the Paralympic Games. LA first hosted the Olympic Games in 1932 and again in 1984.