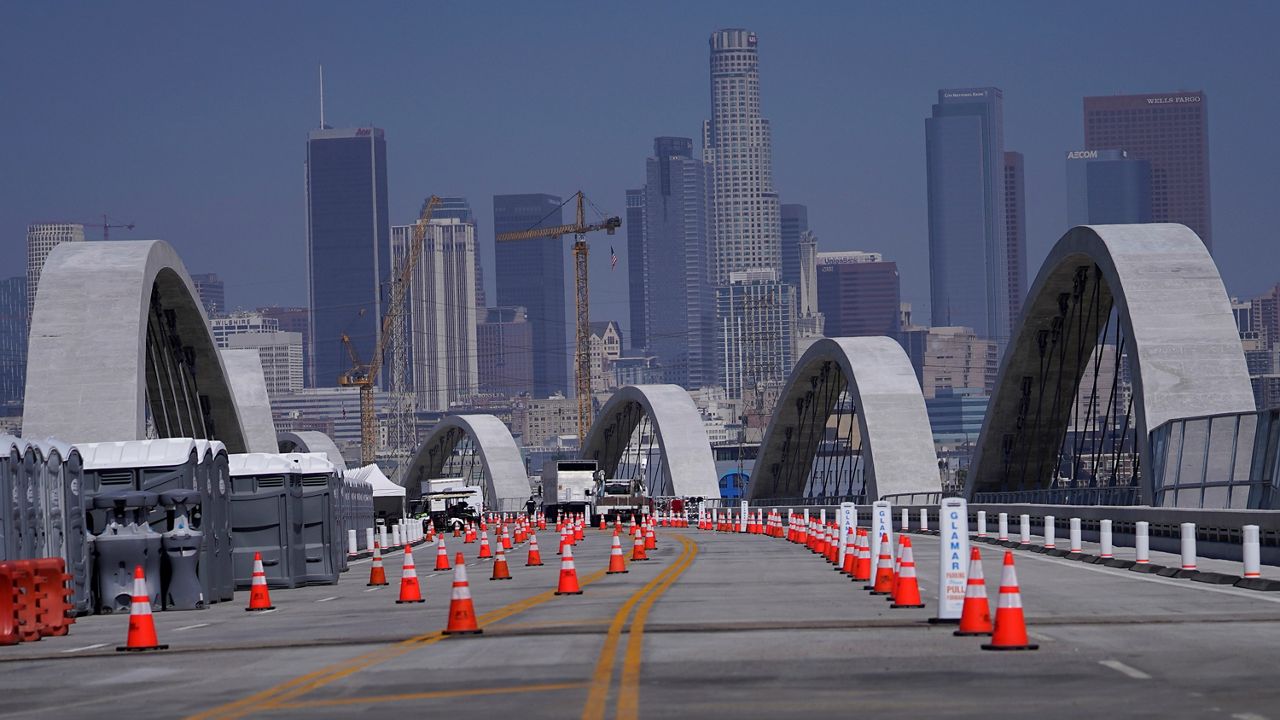 The bridge, connecting Boyle Heights with the downtown Arts District, was reopened early Wednesday after yet another overnight closure — the fourth in five nights — due to "illegal activity" that has included people converging on the span, performing spinouts, burnouts or blocking traffic. The span was reopened at about 4 a.m.

People are leaving skid marks after doing spinouts and donuts in their cars. Others have stopped their vehicles to take pictures, a byproduct of the bridge being built during the social media era, according to Councilman Kevin de León, whose district includes the bridge.

"There is a reasonable question that has been broached for the past few weeks: `Do we in Los Angeles, do we deserve good things?"' de León said at the committee meeting. "And the answer is unequivocally yes. We do deserve good things. Especially in light of a global pandemic, we especially deserve very good things."

But, he added that means residents must take collective responsibility as stewards of the bridge. Graffiti removal crews have cleaned up an average of 1,244 square feet of graffiti each day since the bridge opened and spent an average of 21.5 hours a day at the bridge.

De León urged people to "step up and do everything within our power to make sure that we don't allow a small group of individuals that are looking for their virtual fame to go viral on Instagram, TikTok or Facebook or Twitter — whatever it may be, for them to hijack the bridge that ultimately, at the end of the day, is the people's bridge. This bridge belongs to everybody."

The recommendation passed 3-1, with Councilman John Lee dissenting over concerns that the city would spend too much money on public works for a single bridge, while other districts wouldn't receive a proportionate amount of funding.

The funds would last for about a year of service, according to a staff report. Council members agreed that the funding would only provide a short-term solution to the issues plaguing the bridge. The committee also directed staff to report back on potential security measures.

Harrison Wollman, a spokesperson for Mayor Eric Garcetti, said the city is reviewing safety options and taking immediate action to ensure the bridge is safe and accessible for everyone.

"While the mayor recognizes that the celebration of this bridge is overwhelmingly positive, he has no tolerance for behavior that keeps Angelenos from enjoying this new landmark," Wollman said in a statement to City News Service.

Video from the bridge showed dozens of bicyclists descending on the bridge Tuesday night, blocking traffic as they rode on the viaduct. No citations or arrests were announced. It was the fourth time in five nights that police decided to close the $588 million bridge, which opened to the public on July 10.

Moore said the bridge has become known as a place where people come to "find their 15 minutes of fame" by climbing onto its infrastructure, interrupting traffic and posting demonstrations on social media.

The majority of illegal activity is being committed by people who are not from the surrounding community, according to Moore.

The incidents are "drawing finite resources, limited resources away from more pressing duties to ensure the safety of this location," Moore said.

Some have characterized the incidents on the scenic bridge as made-for-social media escapades designed to gain attention and entertain followers.

Incidents have included a man getting a haircut in the middle of the bridge and another shadow boxing while wearing a red cape. The driver of a car involved in a July 18 crash abandoned the damaged Dodge Charger on the bridge and fled on foot.

Other observers have said the bridge activity is tied to a need for more open space east of downtown Los Angeles with some suggesting it should be closed to vehicle traffic on weekends.

"All the activations on the 6th street bridge show how starved the Eastside is for public space and infrastructure," one person tweeted under the username Rudy. "Instead of banning people off the bridge, ban the cars. Why not more banda and bikes, and less car traffic!"

The July 10 opening of the Sixth Street Viaduct marked a key milestone in a construction project that began in 2016 to replace a 1932-vintage structure. The original bridge was an iconic Los Angeles landmark, seen in movies including "Grease" and "Terminator 2: Judgment Day," but its aging structure was deteriorating, leaving it seismically unsound.

The city Bureau of Engineering has said future plans call for the downtown side of the bridge to include a rain garden, a planted seating area, a play and performance lawn, a sculpture garden, a meadow, a dog play area, an adult fitness section, cafe and restrooms, a sloped river gateway, an urban forest and terraces.

On the Boyle Heights side, the park's plans include a skateboard area; a meadow; a picnic area; a synthetic turf soccer field; flexible courts sized for basketball, futsal and volleyball; a play and performance lawn; a children's play area; a promenade; a landscaped seating area; an adult fitness area; a rain garden; a dog play area and grilling spaces.