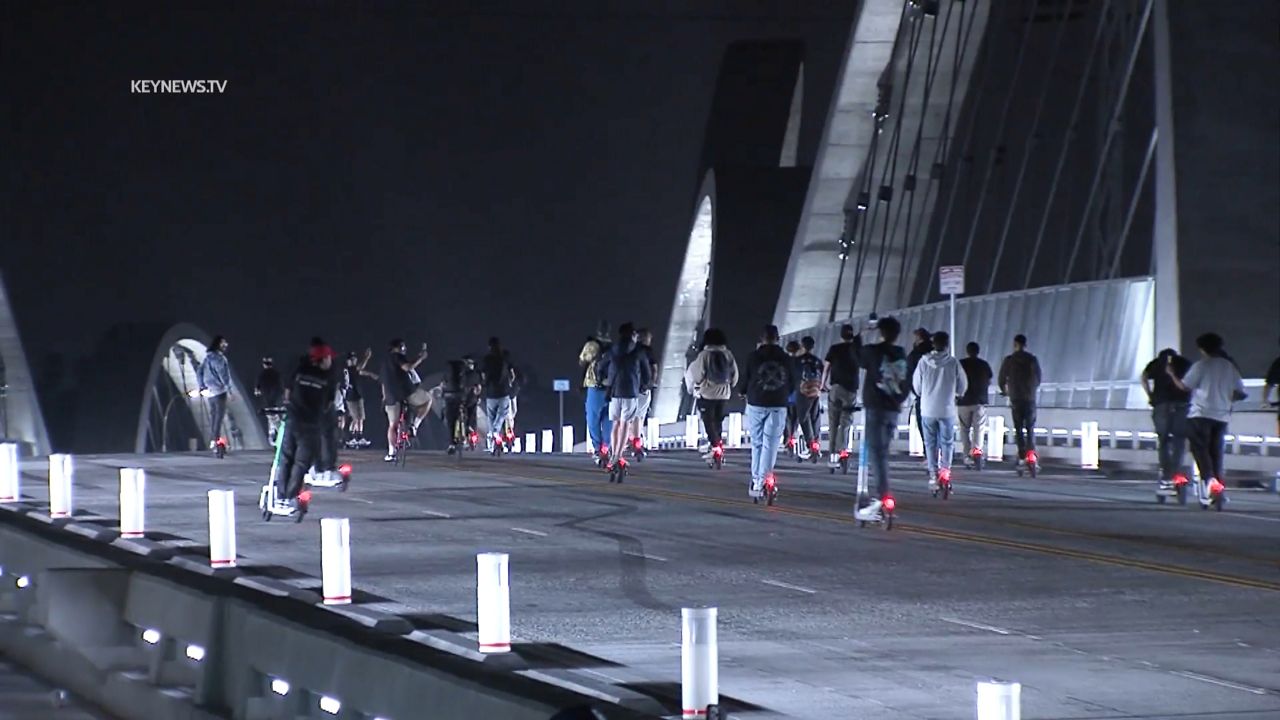 EDITOR'S NOTE: Multimedia journalist Kristen Lago spoke with the founder of Streets For All about the bridge. Click the arrow above to watch the video.

LOS ANGELES (CNS) — The Sixth Street Viaduct was closed Sunday evening for a third night in a row — for what the Los Angeles Police Department characterized as "illegal activity."

"Unfortunately, we've entered another evening where the 6th St Viaduct had to be closed due to illegal activity," the department's Central Area Division tweeted late Saturday. "The day began with community residents holding signs in the middle of the bridge to "RESPECT THE BRIDGE."  Let's listen!

The $588 million bridge, which opened to the public on July 10, was also closed overnight Saturday due to a  traffic collision involving a pickup parked in a no-parking zone that was struck by another vehicle.

"After a 2 hour closure, the bridge was opened," the central division tweeted late Friday. "In less then an hour, 200 people arrived for a street takeover, fireworks and vandalism. Maximum enforcement will continue over the weekend.

Some have characterized the bridge mishaps as made-for-social media or Instagramable escapades designed to gain attention and entertain followers.

"I need to take advantage of the 6th Street bridge to get famous soon," Don Julian tweeted Saturday.

But police said these social media stunts can also encourage people to break the law.

Other observers have said the bridge activity is tied to a need for more open space east of downtown Los Angeles with some suggesting it should be closed to vehicle traffic on weekends.

"All the activations on the 6th street bridge show how starved the Eastside is for public space and infrastructure," one person tweeted under the username Rudy. "Instead of banning people off the bridge, ban the cars. Why not more banda and bikes, and less car traffic!"

The bridge was closed for about two hours Friday evening because of a crash at 9:55 p.m., according to LAPD Officer Rosario Cervantes prior to that night's takeover.

Cervantes said no arrests were made in that instance. However, the Central Division tweeted that anyone who parks on the bridge will have their vehicles cited and/or towed, and anyone present at a bridge takeover will be cited.

In the days since it opened, several street takeovers have been reported on the viaduct, which connects Boyle Heights and the downtown Arts District and replaced one of the city's most iconic structures — an earlier bridge that also drew its fair share of "stunts" during its more than 80-year history.

Video on social media from last weekend showed drivers spinning their wheels and performing other antics on the bridge, leaving the pavement scarred. Some people even crawled onto the ribbon-like arches that line the bridge to get elevated views of the action.

Other isolated incidents have included a man getting a hair cut in the middle of the bridge Wednesday and another shadow boxing while wearing a red cape. The driver of a car involved in a July 18 crash abandoned the damaged Dodge Charger on the bridge and fled on foot.

"It is the way things go, there's positive uses and negative uses and everything in between," Cameron Mayer, a visitor, told a local news station. "I think it's just the fabric of the city."

Another person told a local news outlet, "This is why we can't have nice things."

"It's a shame the citizens of Los Angeles County don't have more civic pride for the feat of engineering that's taken place behind them," another one man told reporters near the bridge.

The opening of the Sixth Street Viaduct marked a key milestone in a construction project that began in 2016 to replace a 1932-vintage structure. The original bridge was an iconic Los Angeles landmark, seen in movies including "Grease" and "Terminator 2: Judgment Day," but its aging structure was deteriorating, leaving it seismically unsound.

The city Bureau of Engineering's has said future plans call for the downtown side of the bridge to include a rain garden, a planted seating area, a play and performance lawn, a sculpture garden, a meadow, a dog play area, an adult fitness section, cafe and restrooms, a sloped river gateway, an urban forest and terraces.

On the Boyle Heights side, the park's plans include a skateboard area; a meadow; a picnic area; a synthetic turf soccer field; flexible courts sized for basketball, futsal and volleyball; a play and performance lawn; a children's play area; a promenade; a landscaped seating area; an adult fitness area; a rain garden; a dog play area and grilling spaces.