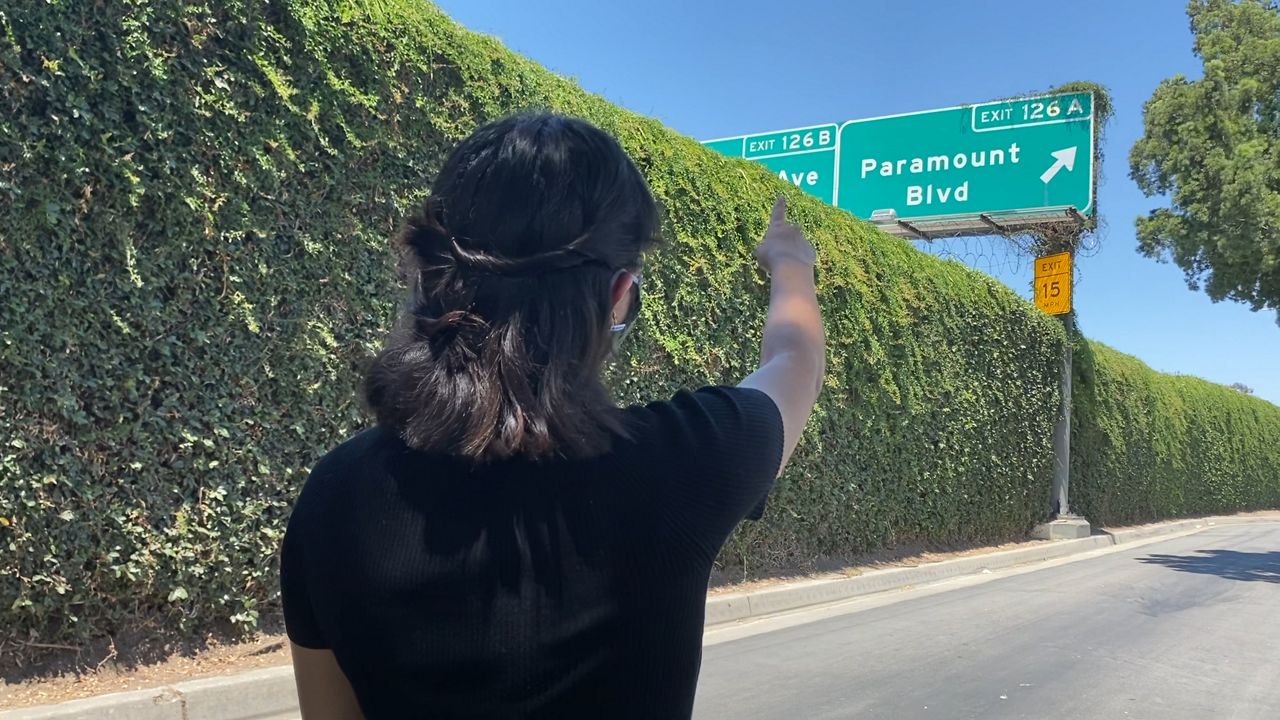 DOWNEY, Calif. — "Destruction For Nada" is a campaign launched by several grassroots organizations working to stop freeway expansions in LA County. According to them, it is destruction for nothing because more lanes just result in more traffic.

Alexandria Contreras is head of a coalition that is part of this campaign.

Contreras, who uses the pronouns they/them, has spent nearly 27 years living in their Downey home. They said it’s the place they know they can always run back to, which is why they’re fighting so hard to save part of their Downey neighborhood from a proposed freeway expansion.

"What is happening here is displaced violence, really. Of what is a lower income, very ethnic neighborhood, predominately Latino," Contreras said.

Though Contreras' house is not at risk, just steps away, they point to the neighbor’s homes they said could be demolished with Metro’s plan to add additional lanes to the I-5 freeway that backs the street, as part of the I-605 corridor project.

Contreras said at this point, it feels personal. Their family's neighborhoods have been targeted by freeway expansions for generations.

"My grandparents lived in Boyle Heights and their house was seized by Metro Los Angeles via eminent domain, to support the construction of the Gold Line," Contreras explained.

And it happened to their great grandparents' Boyle Heights neighborhood, too. A trend of decimating low income, communities of color that Contreras now feels called to fight against.

After graduating college, Contreras traveled the country working in community engagement before returning to Downey to become a housing advocate and even run for City Council.

Their campaign to improve Downey’s housing, street safety and environment has affected them since they played at their elementary school playground, breathing in the pollution from the freeway on the other side of the wall.

When Contreras didn’t get elected, they continued to address the issues with their Happy Cities Coalition.

"With all the science and the data and the knowledge that we know now, we know that freeway expansions don’t work, they actually make traffic worse, they bring more pollution to the area, they negatively impact physical and mental health," they explained.

That is why Contreras is partnering with several other organizations to launch a campaign called Destruction For Nada, hoping to put an end to what they call pointless freeway expansions.

Other organizations participating in the campaign are Streets For All, Sunrise Movement LA, Climate Resolve and more.

Campaign organizers are asking for people to submit public comment, telling Metro to reallocate billions of dollars spent on widening freeways to projects that reduce car use instead.

At least for this fight, it appears they’ve been heard.

In a statement, Metro Representative Brian Haas said, "In partnership with Caltrans, Metro has effectively paused the I-605 project to bring together all stakeholders, including those in the corridor community, to develop a set of principles for how Metro and Caltrans can work together to invest in and around these highway corridors.  It is critical that we continue to address LA County’s mobility needs for people and goods through a framework that serves as a means to address road safety, access to opportunity, equity, economic vitality, and environmental sustainability."

It’s news to Contreras who said they will continue to advocate for low income, immigrant families, like their own, in all of Southeast LA County.

"This is their form of passing on generational wealth to their children, like this is what they have to offer. And if it’s taken away, those families are left back at square 1," they said.

For more information about Destruction For Nada, click here

Destruction For Nada says the Council of Governments that advises Metro is having its monthly meeting on July 7.